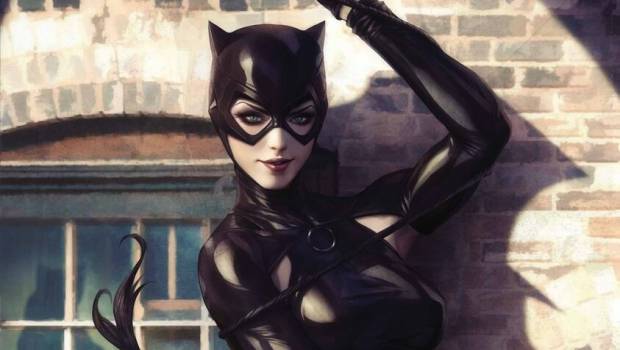 Summary: Issue # 1 of the new Catwoman series.  The story picks up in the aftermath of Batman #50.

Issue # 1 of the new Catwoman series.  The story picks up in the aftermath of Batman #50.  I will do my best to avoid spoilers for those readers that missed the New York Times spoiler of the issue. 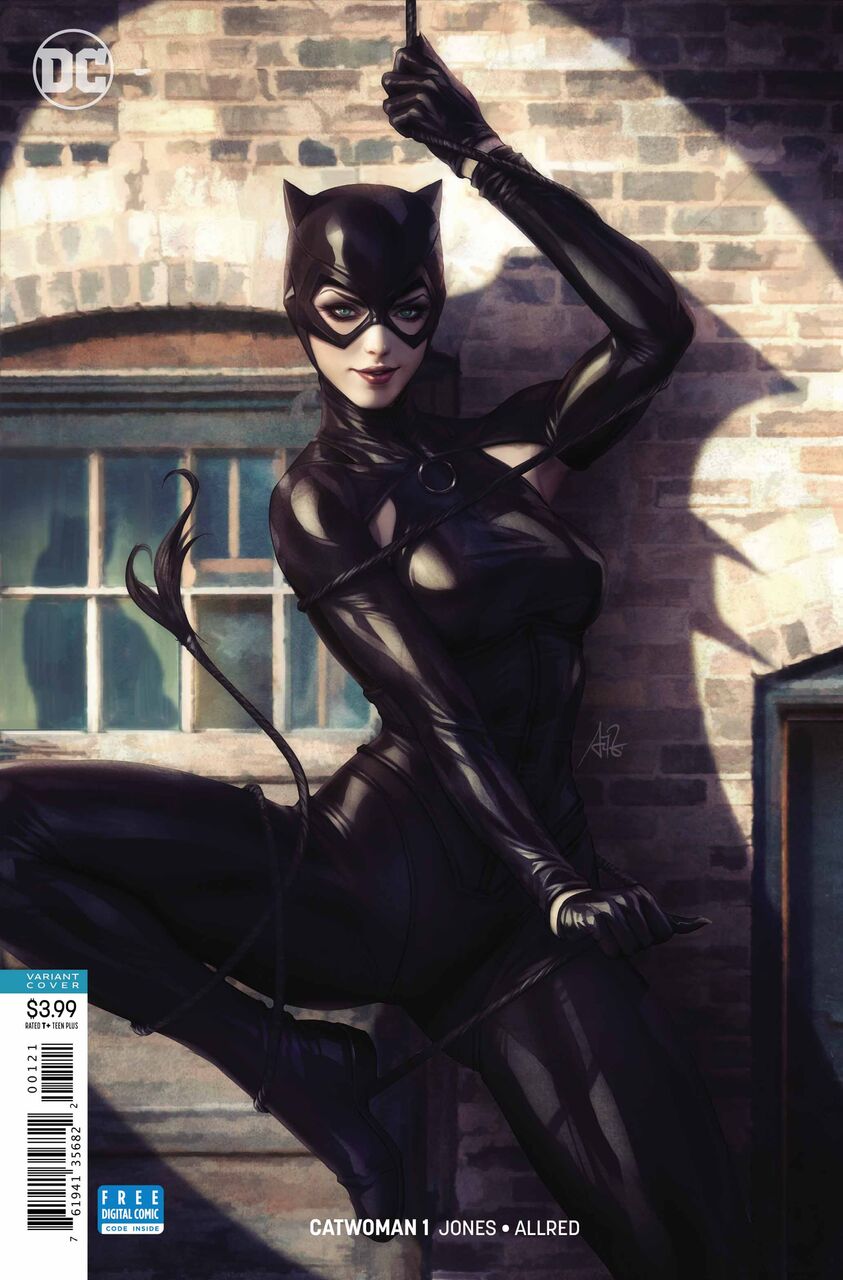 There are two covers to this issue, the standard, and a variant.  Joelle Jones and Laura Allred handle the standard cover, which features Catwoman in sleepwear.  She is holding an issue of Batman #50 and warning readers to avoid the issue to escape spoilers.  The bedroom she is in appears to be of higher class, full of cats, and could be a joint room for herself and Batman.  I feel Jones and Allred craft a good cover that potentially hints at how Batman #50 ends, but don’t outright give it away.

The variant cover is done by Stanley Lau, and features Catwoman in full costume.  It features her hanging from a building, somewhat provocatively, with her whip.  Catwoman stress straight out, a mysterious look on her face.  The only tease to Batman #50 and the wedding being the shape of a bat’s head in her shadow. 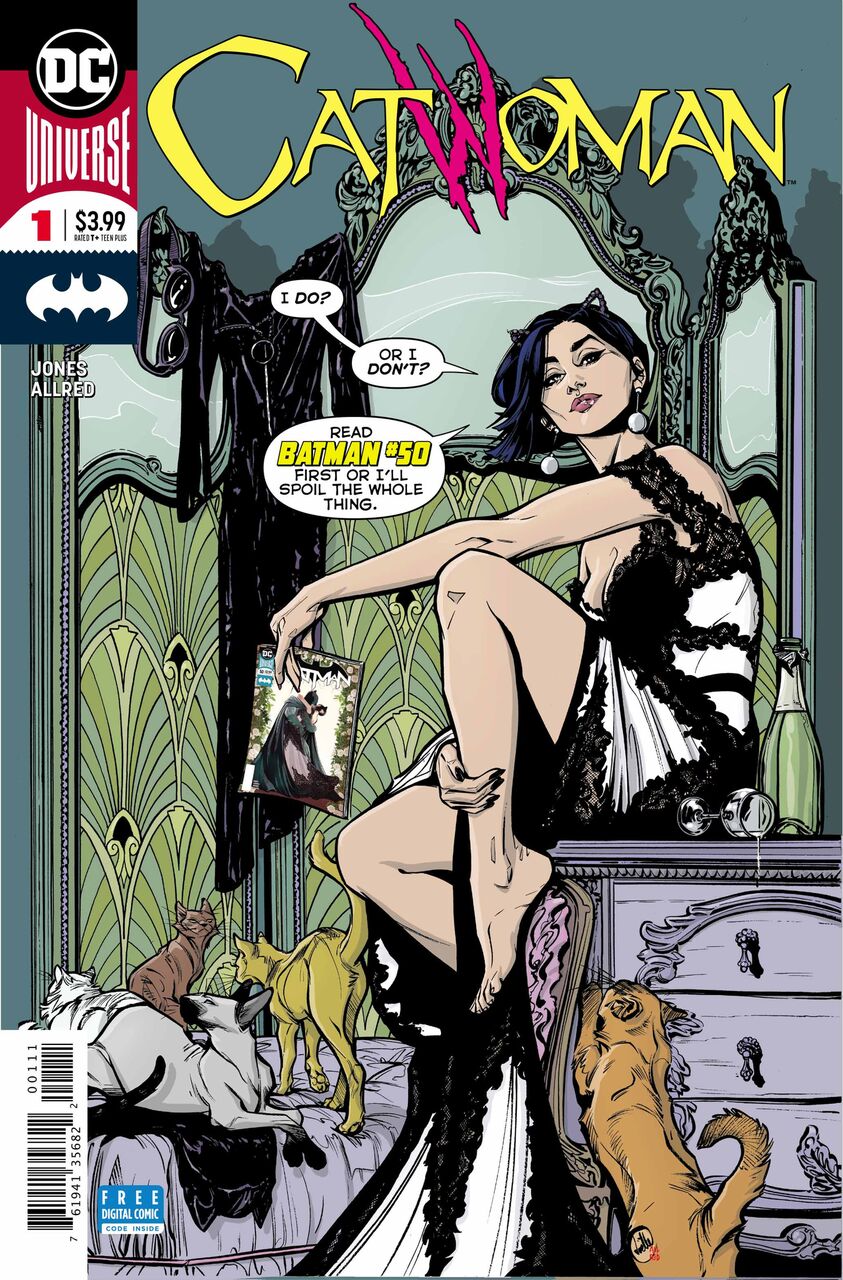 The art and story are both done by Joelle Jones.  The art is both distinctive to the Batman universe, yet differs enough to give the book its own unique voice.  The grittiness appearing in the pencils is very indicative of the bat-books.  This is especially noticeable in the introduction of the woman who I feel is going to be the primary antagonist.  Where it differs is in the use of colours which appear far more prevalently. They also aren’t as muted as in other Batman Universe books.

Where the art truly shines is with the introduction of Raina Creel, First Lady of Villa Hermosa.  She at first appears to be a well put together politician’s wife, with the reveal later in the issue that she may be something very sinister.  The scenes as she steps out of her costume as First Lady are both surprising and a little shocking. 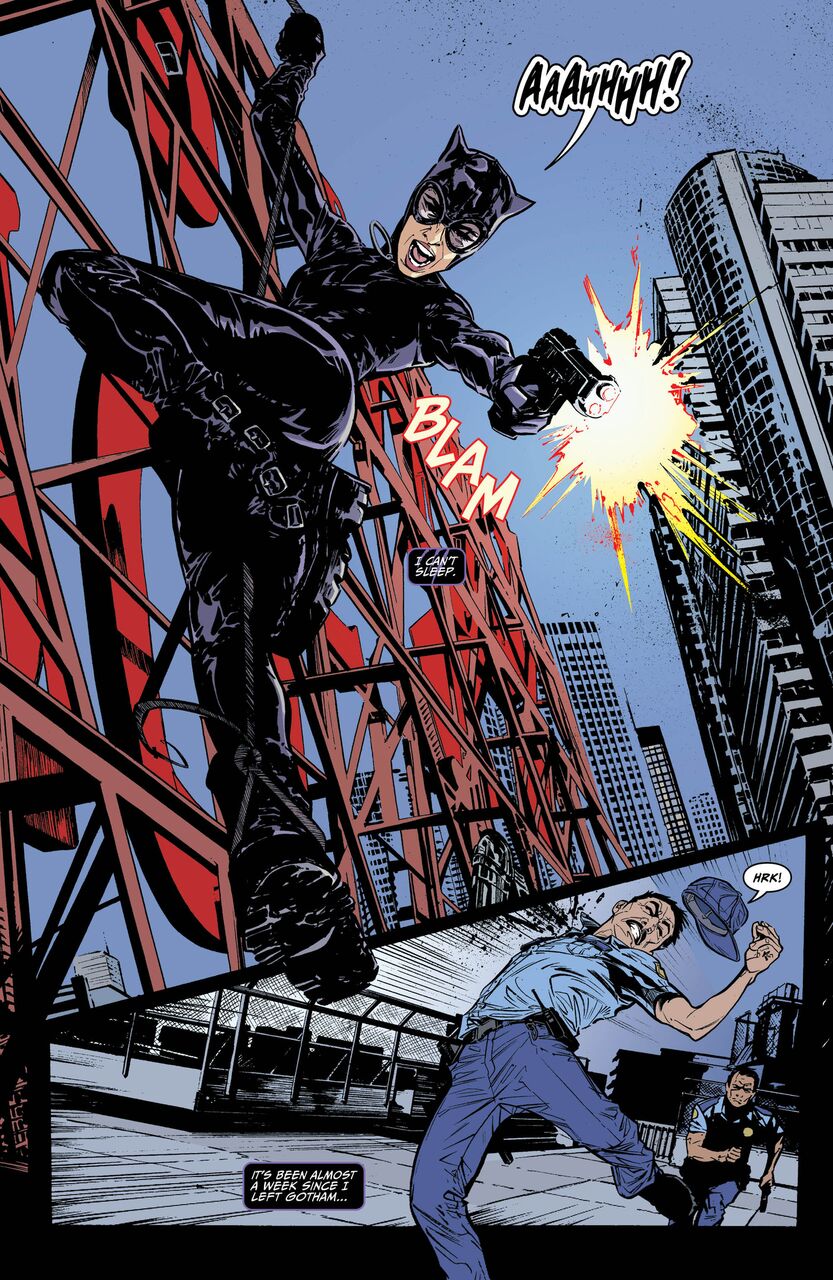 The story begins with a Catwoman being pursued by the police interspersed with an interview with the first lady and Selina Kyle gambling.  The Catwoman kills two police officers in a successful bid to escape. The interview continues, and finally Selina is forced to flee the police who are trying to take her in for those very murders.  We shortly discover that this Catwoman works for the First Lady, who is definitely more than she appears.

The book ends with Selina taking to the streets to retake her moniker and ends in a great cliff-hanger leading into the next issue. 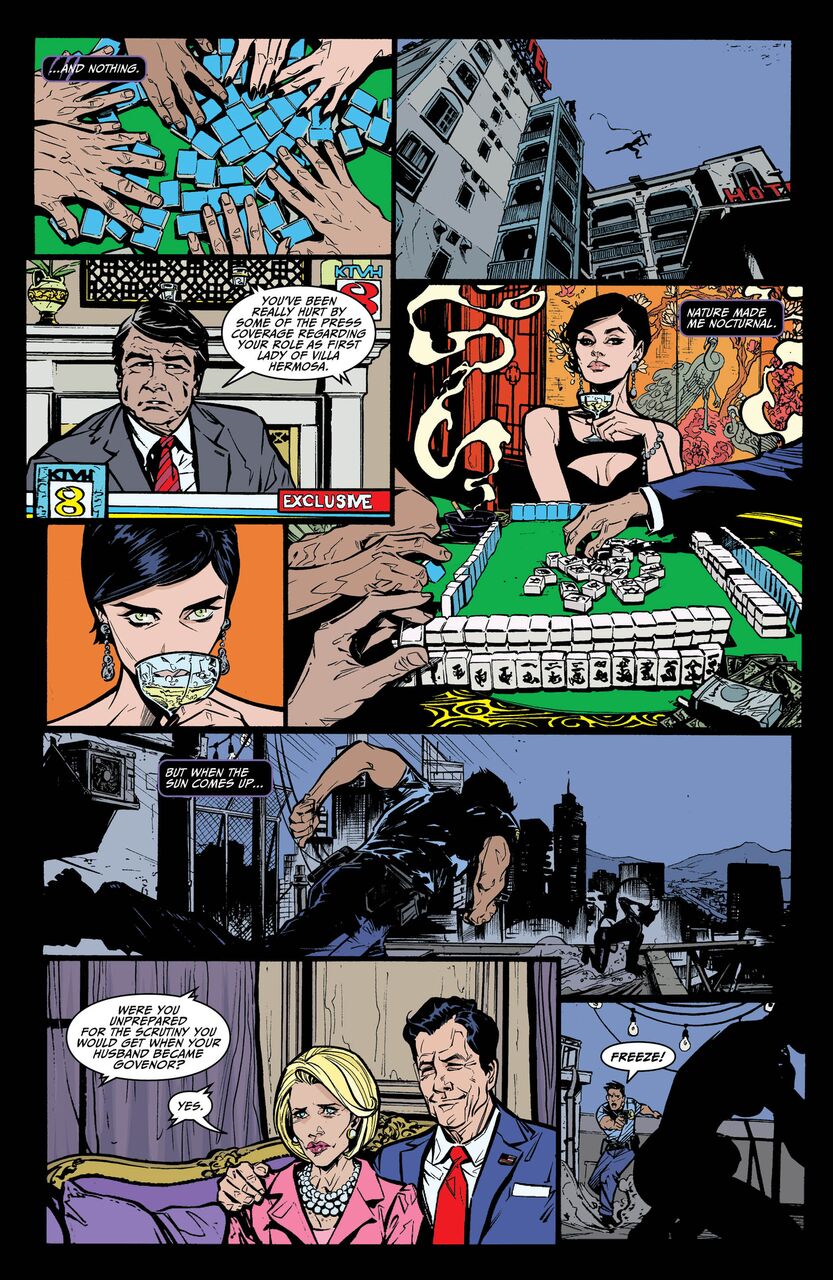 This book is a solid read.  However, if you are worried about spoilers for Batman #50, make sure you read that issue first.  It takes Catwoman from a vulnerable position and thrusts her straight into the action.  This new villain seems both creepy and intriguing; with the copycat Catwoman in her employ it makes you wonder what her end game is.  The art does a great job supporting both the atmosphere of the story and contributes to the development of the characters, especially Mrs. Creel.

If you’ve been lucky enough to avoid spoilers for Batman #50 this issue will likely hold a little more weight, but overall it is a great beginning to a new ongoing Catwoman series.  It gives just enough to be intriguing and ends with you wanting to know what’s next.

Catwoman #1 warrants 3.5 stars out of 5, largely due to the soured milk of the online spoilers of the Batman/Catwoman wedding arc.  Catwoman deserved a better introduction to her own solo series. 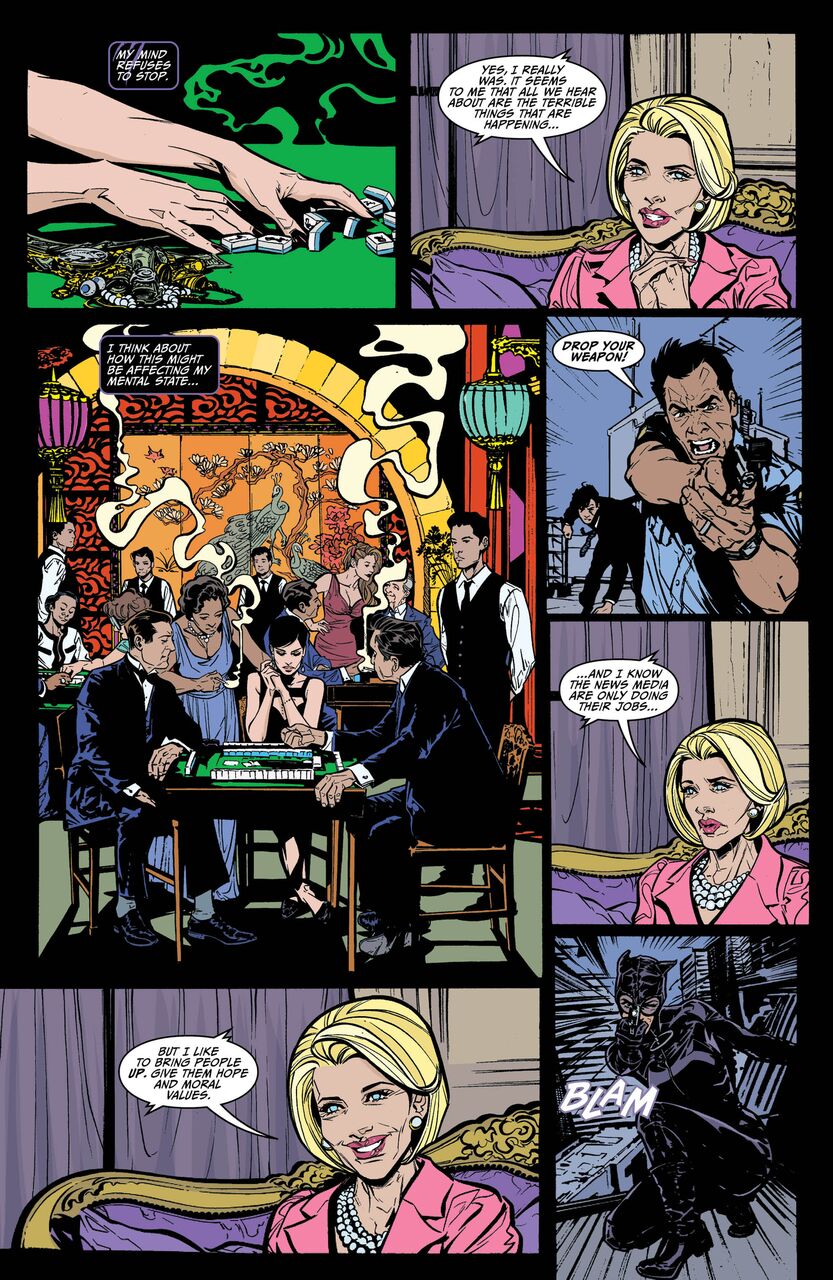 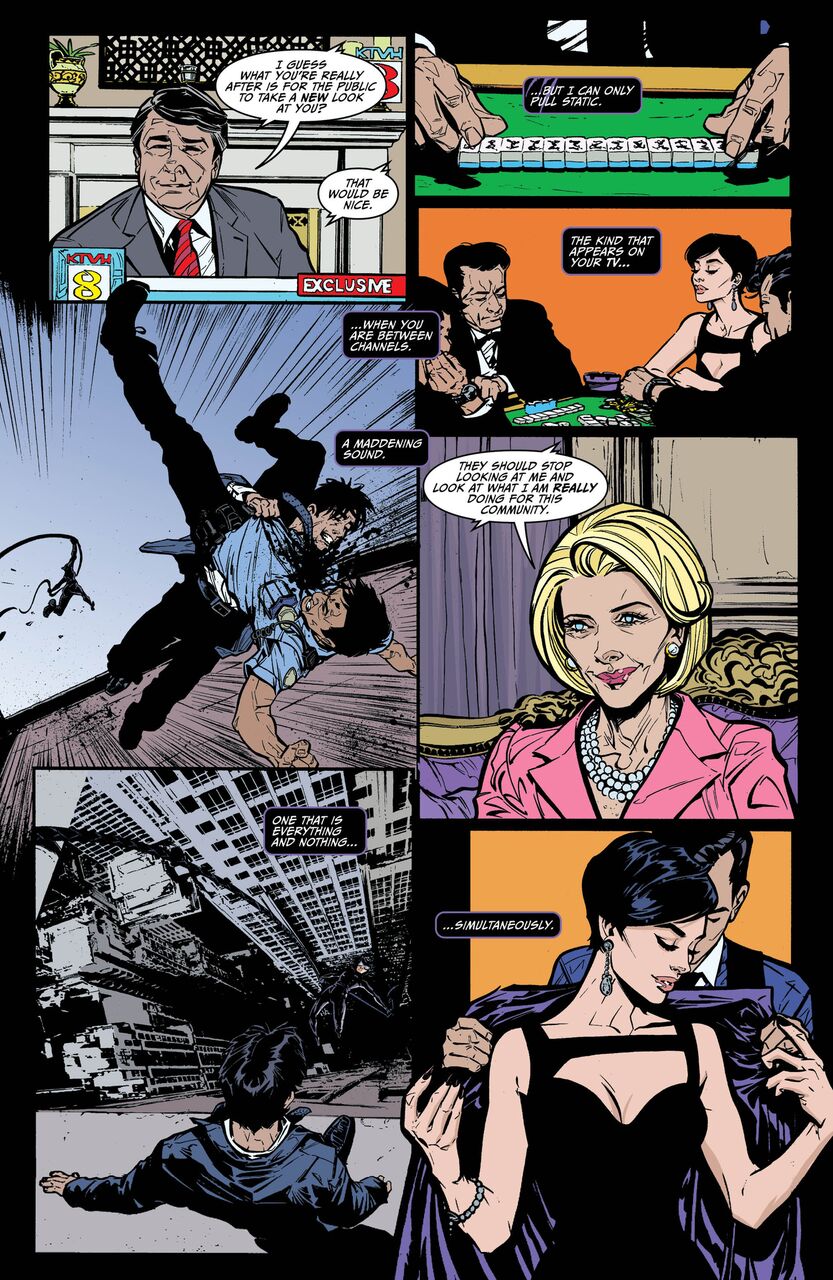