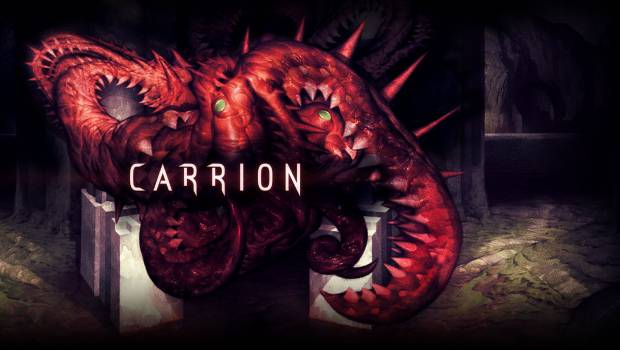 Summary: Carrion is an excellent 2D action game that lets you unleash mayhem as a terrifying, destructive monster.

I’ll admit that I have a soft spot for games that that thrive on chaos. I’ll always get a giddy rush of joy when it comes to smashing or destroying things in a video game – especially if the action feels particularly satisfying to perform. As such, my brain has been subjected to an overload of pleasure for the past week as I’ve been playing through Carrion, a game that puts you in direct control of a gigantic, destructive monster and encourages you to be as chaotic and ruthless as possible. 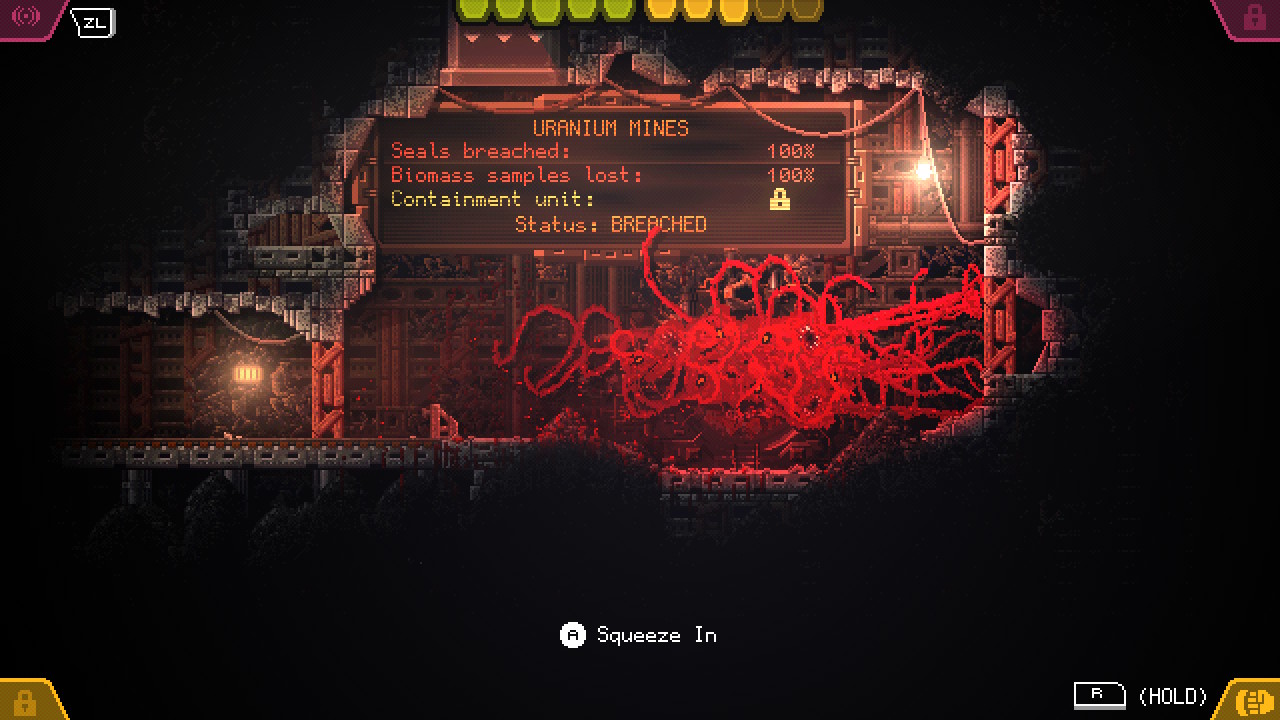 Carrion is primarily a 2D action game, but it also has a nice peppering of stealth, puzzle solving and Metroidvania elements tossed into the mix as well. You play as a grotesquely-tentacled meat monster whose only ambition is to grow and spread your biomass throughout this sprawling military-testing facility. To do so, you’ll be crawling through ventilation shafts, bursting through doors and eviscerating any unfortunate human that stands between you and a potential spawning nest. 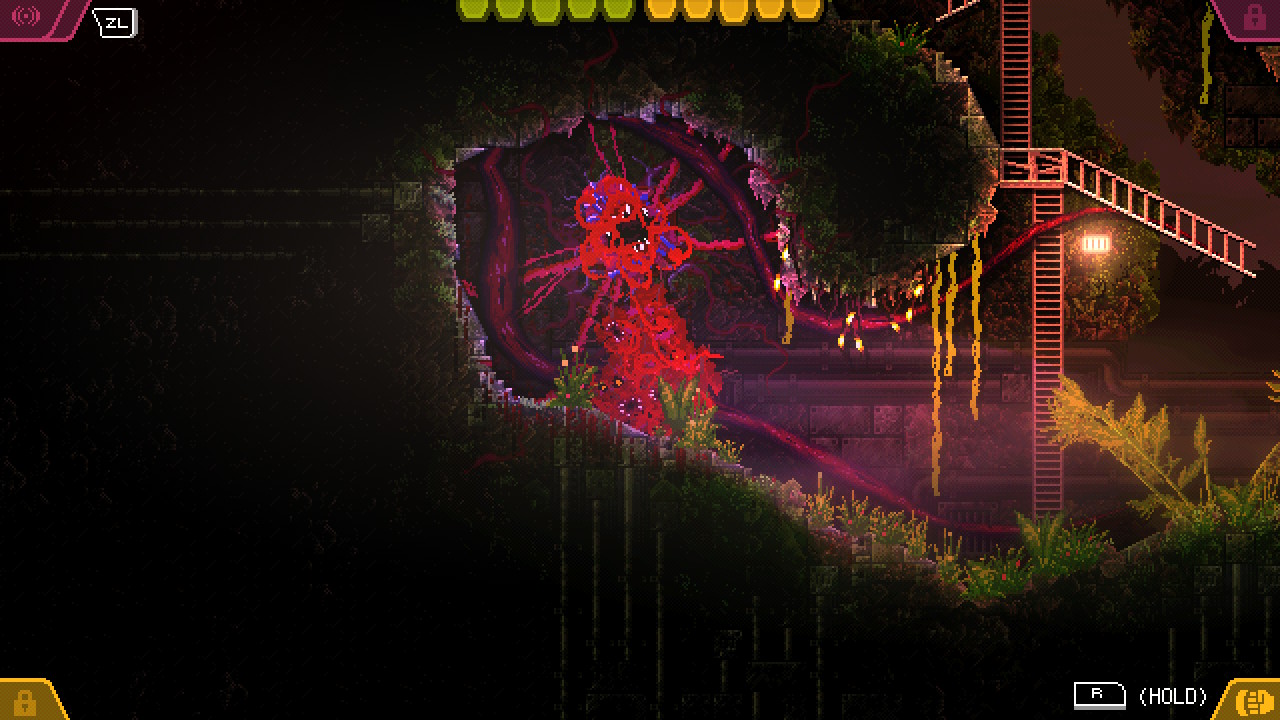 The fundamental thing that makes Carrion so much fun to play is that controlling the monster feels incredibly satisfying. Whether you’re swiftly careening through hallways, snatching up victims with your tentacles, or deftly squirming between crawl spaces to avoid detection from armed guards, everything feels fluid, weighty and just downright fun to execute (so to speak). 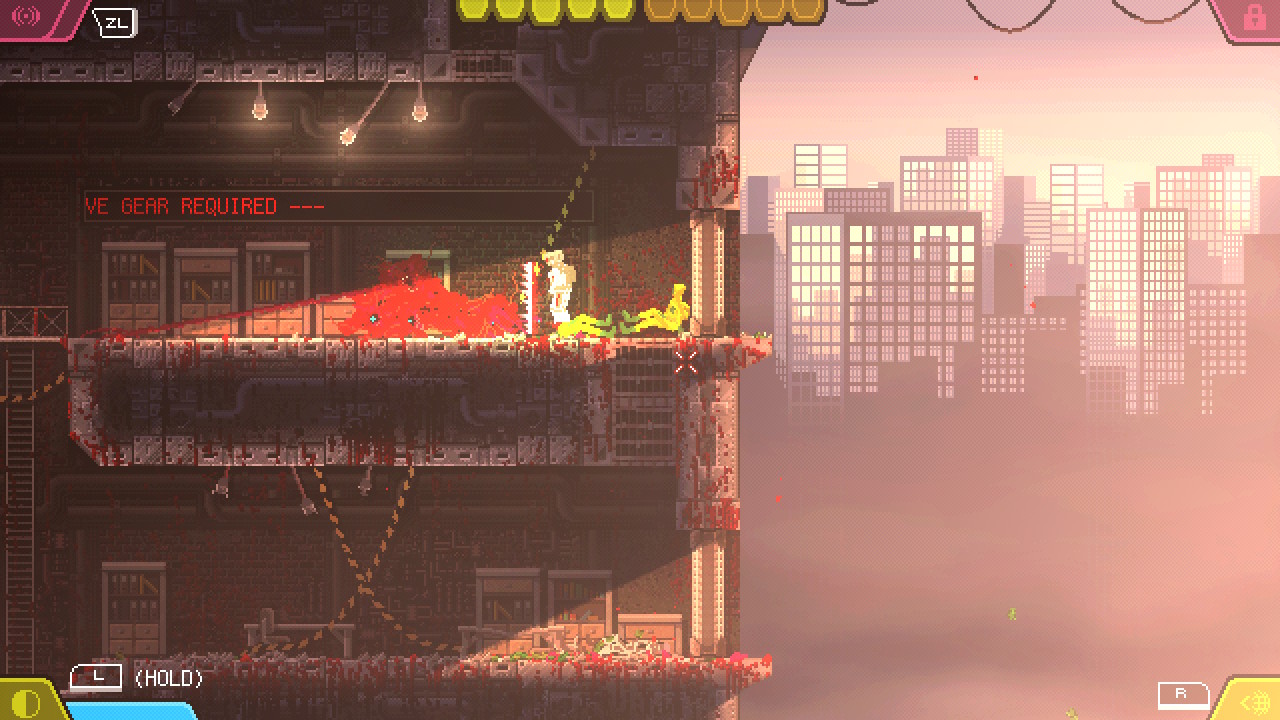 The monster is controlled with the left analogue stick and can move in any direction with the help of autonomous tentacles that carry your fleshy abdomen. There’s a nice sense of movement and momentum that you feel as you fling around the various platforms, tunnels and caves while exploring. As you delve deeper into the facility, you’ll find bio-engineered upgrades that can be absorbed to grant new abilities, such as being able to grow in size or smash through certain materials. These abilities are very fun to engage with and can be used both in combat situations and to solve puzzles in the environment. There’s a great sense of anticipation that you feel after acquiring a new upgrade, which quickly leads to grandiose visions of power as a lumbering, chaos machine zipping through areas with a devastatingly awesome toolset of destruction. 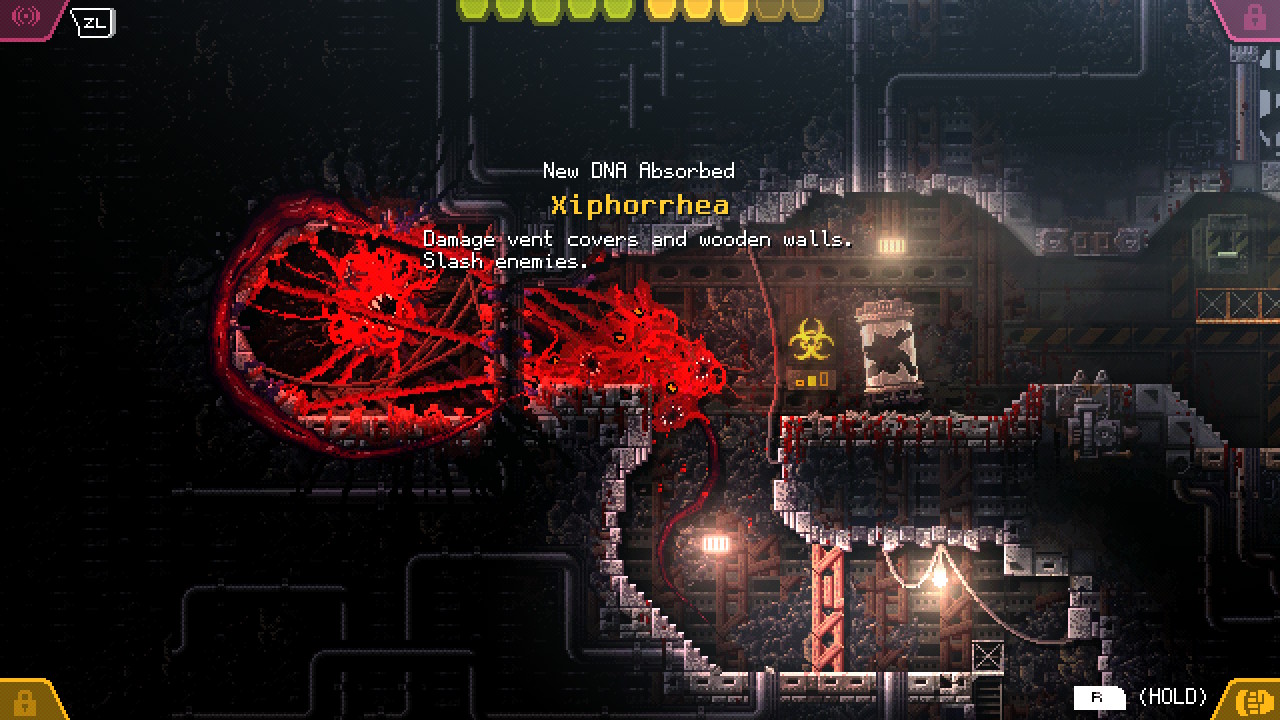 These abilities also relate to the aforementioned Metroidvania elements of Carrion’s gameplay loop. The facility is broken up into separated biomes such as the wastelands, the reef and the containment area – think of these biomes as different worlds in a platformer. To get to the next world, you need to find the three or four nests located within the current biome and infest them to spread your biomass throughout the facility. Typically, each new biome will come with a new ability upgrade, which you will use both in combat and to solve puzzles in order to unlock the next world. There aren’t any hidden collectibles to go back to find in previous areas and most of the progression through the facility is done rather linearly, so the Metroidvania elements are fairly thin – but there is a great sense of growth and progression that comes along with continuous exploration of these interesting new areas. 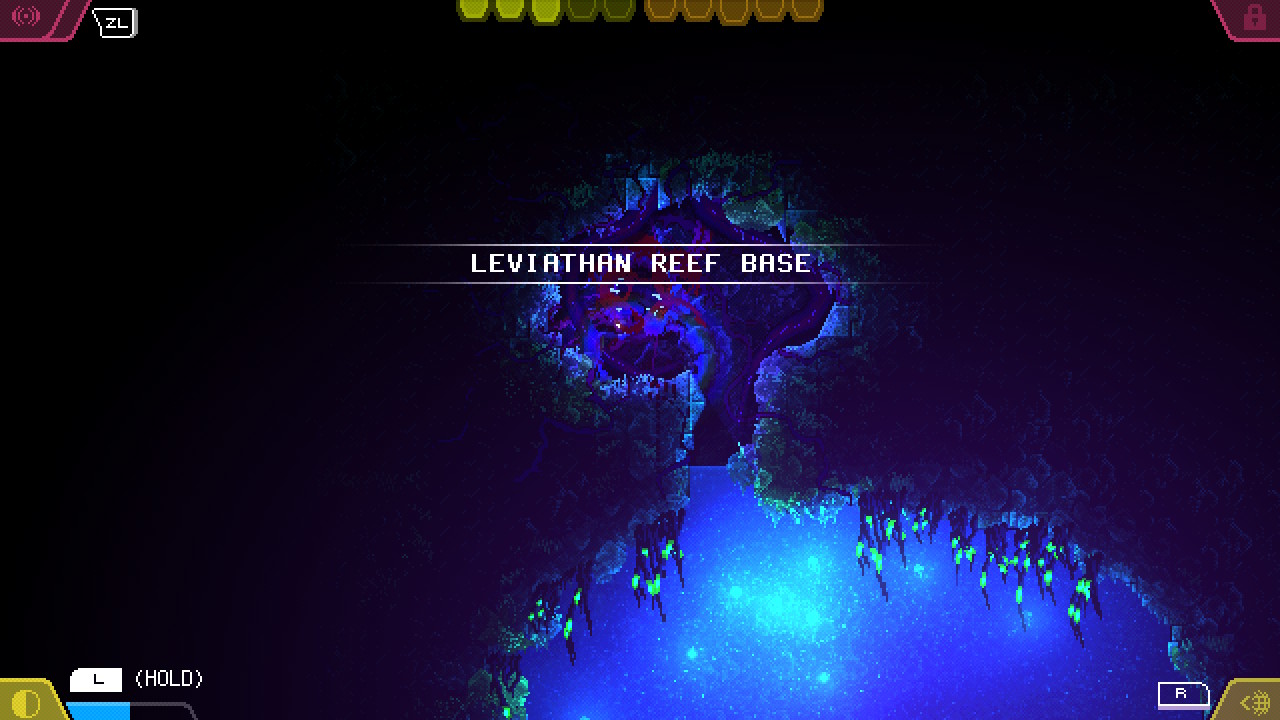 Bizarrely, there is no overworld map or objective markers in Carrion – assumedly because the progression is so simple and linear. However this lack of direction and world map can lead to situations of stumbling through an area, trying to figure out where to go next – particularly if it’s been a while since you last played the game. However the biomes are rather small and there are generally signposting hints like illuminated ‘exit’ signs to give you small indicators of which direction to head towards. 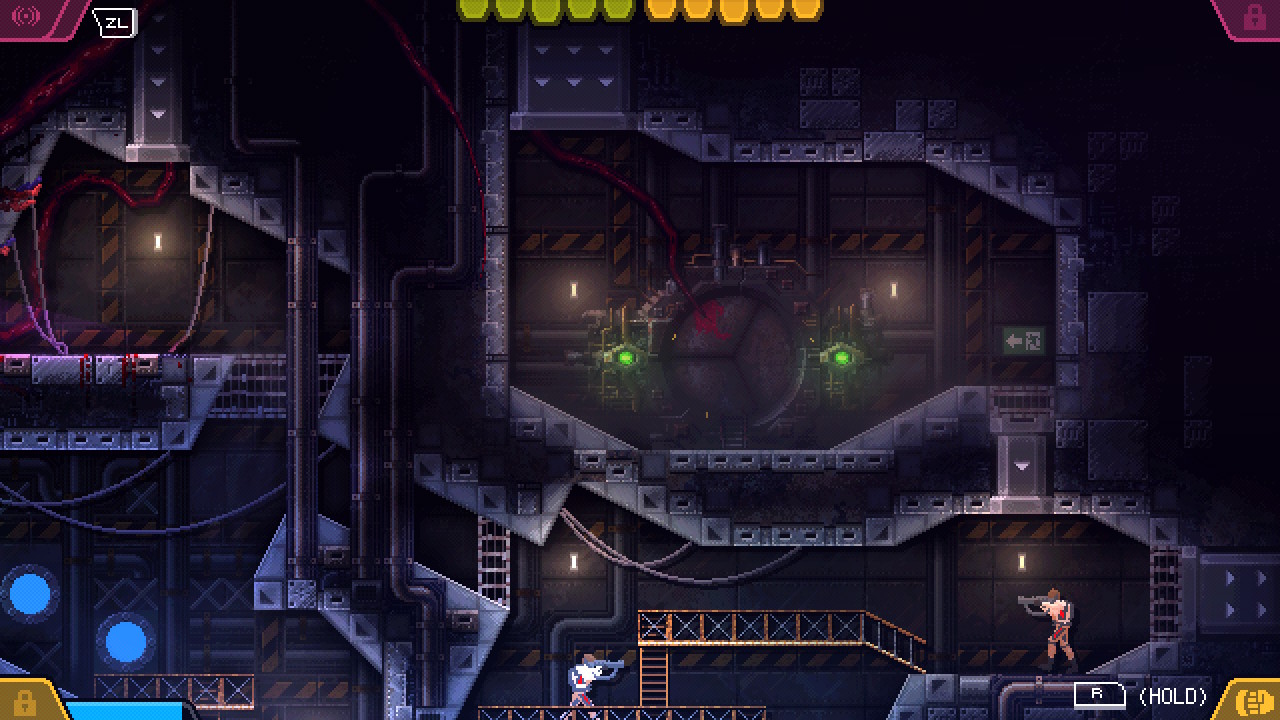 Aside from the sheer fun of the moment-to-moment gameplay, Carrion stands out in my mind for its incredible pixel art visuals. Screenshots can’t do justice to just how incredible the game looks in motion. While the facility and the biomes look neat from a design perspective, it’s the lighting and ambient effects such as fire, smoke and viscera that fill the screen in moments of chaos that truly left me astounded. It’s been a long time since an indie game has impressed me with its pixel art, but Carrion managed to do so every step of the way. 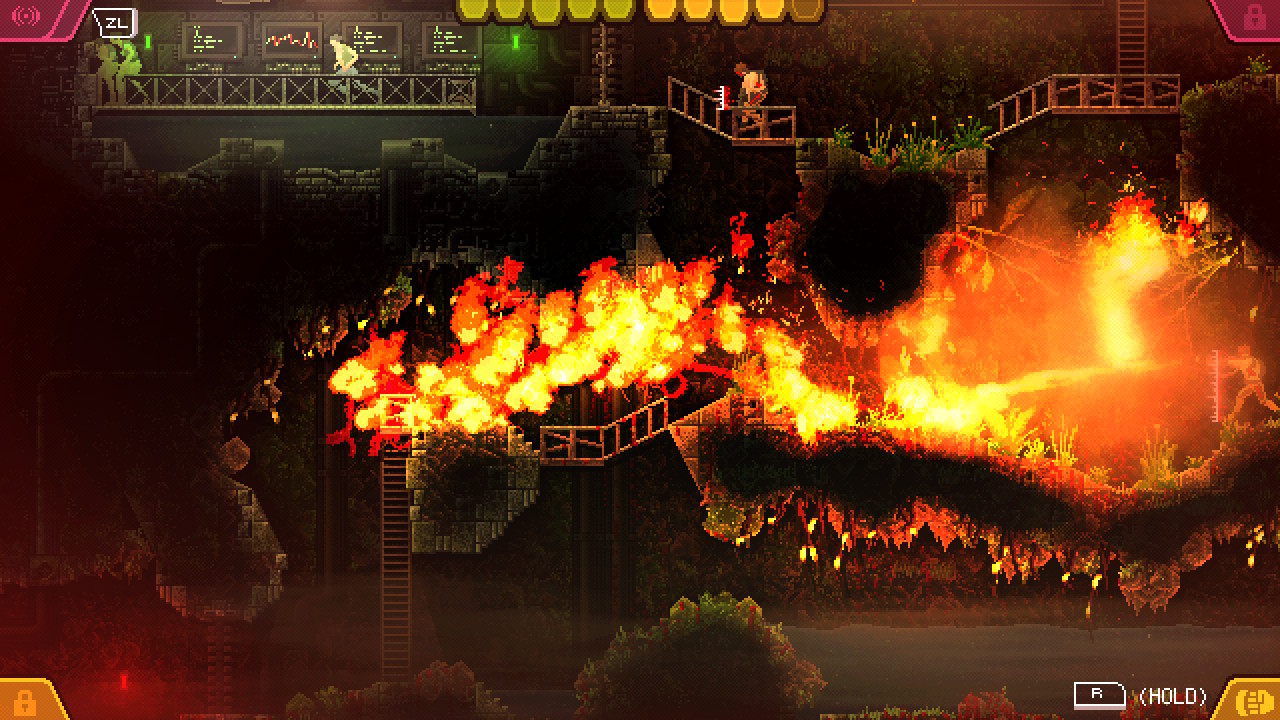 Carrion is a truly excellent game. It looks great, it’s an absolute blast to play and it manages to keep upping the ante at every step of the journey to create a fun and memorable gaming experience. The biggest criticism I have of Carrion is that it is fairly linear and rather thin on content – you can play through the whole thing in about four to five hours and there isn’t any motivation to go back through once you’re done. However, the fantastic pixel art and brutally satisfying gameplay more than make up for these shortcomings – do yourself a favour and pick up Carrion to unleash some of your built-up isolation frustrations on some hapless pixelated scientists. 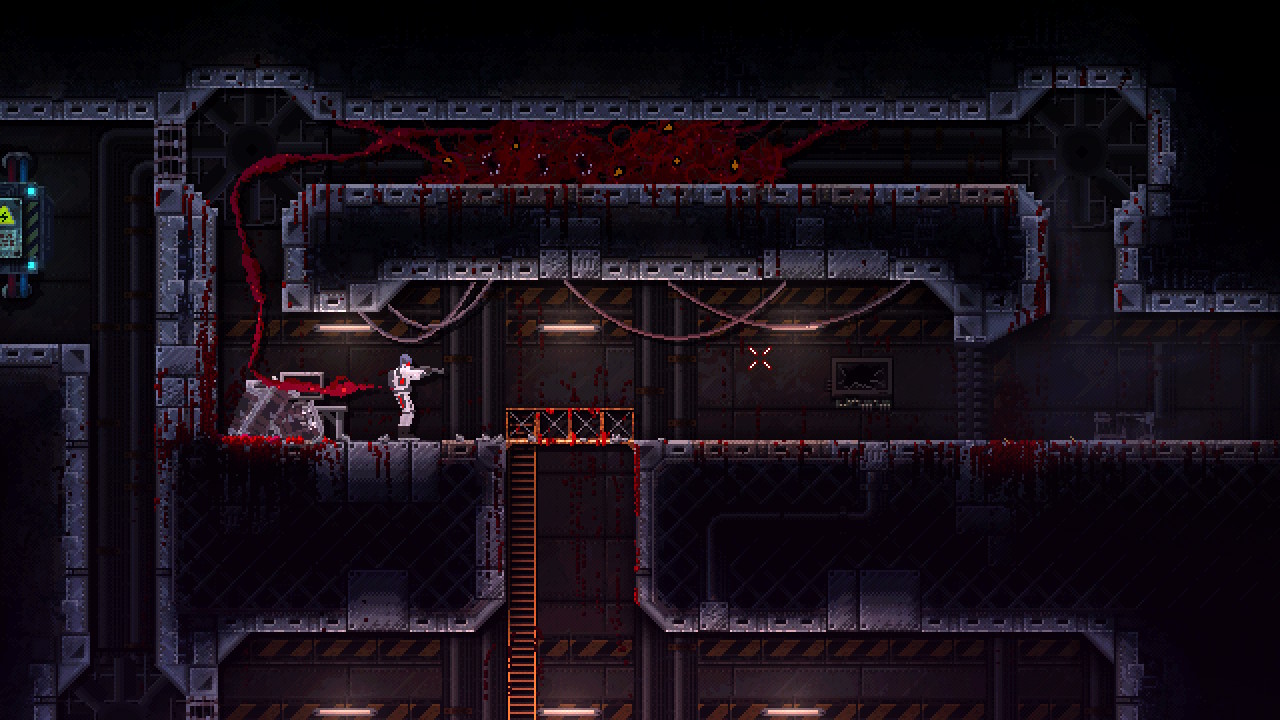 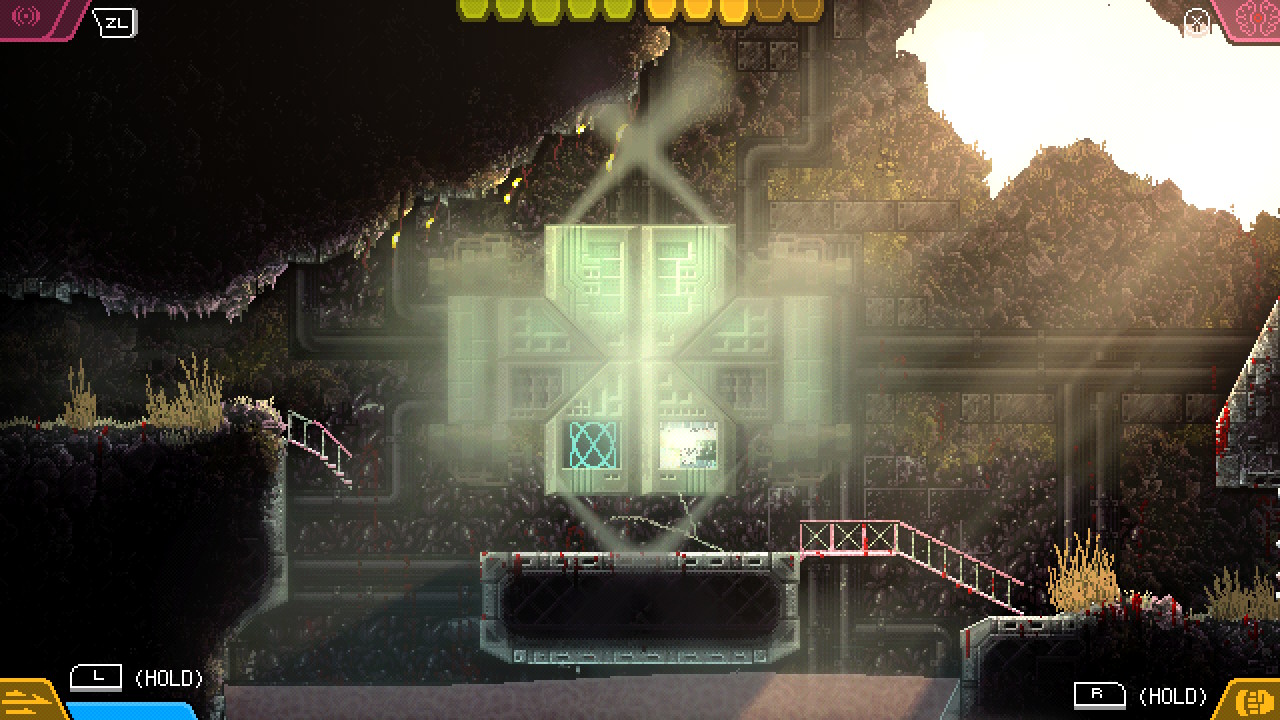