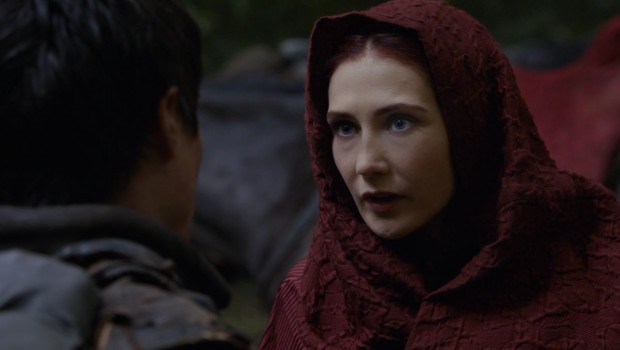 Did it help that you had worked with Liam Cunningham knew before Game of Thrones?

Yes, we did know each other; we’d made a film together (Black Butterflies) and yes, that did help. We’re like an old married couple (laughs). You’ve only seen us for one minute, but this is how it goes. We just tease each other the whole day.

How does Stephen Dillane fit into that dynamic?

But you’re dealing with some pretty dark stuff. Is humour off set a good release?

I know – we’re probably dealing with the darkest stuff – but when Liam is around he just makes me laugh so much. I’m very grateful to be working with those two men. They’re so different, and that could go wrong, but in this case it’s a wonderful yin-yang.

How did you first find out about Game of Thrones?

I saw the first two or three episodes, and I was immediately intrigued. I got why this was a success.

Is it fun playing Melisandre?

Yeah, it’s great fun. She’s a mystery though. It wasn’t really clear for me, and that’s why it’s interesting. It wasn’t like, ‘So you are playing the bad guy.’ It’s so complex, because there’s not much we know about her, and not much we want to reveal. There’s not much humour, which I find hard, because I like the lighter stuff. For me, it was a different character to play.

Do you turn to the books for clues on how to play her?

Sometimes. I’ve got all the books. They’re next to my bed. They’ve been opened a couple of times. I have been scrolling through it to see if I could get some more, but, at the same time, I tend to just start from the script and from what the directors want. In the books she has red eyes; she’s much more of a – not a cartoon character – but we tried to make her a little bit more human.

Where did we leave Melisandre at the end of season three?

We have seen her leaving Dragonstone to go to the Riverlands, to get Gendry. We’ve seen that she wants Gendry’s blood for a certain ritual. We’ve seen her make that trip, and we’ve seen her speak High Valyrian. She saved Davos, which is amazing because they hate each other’s guts. Or, I think he is more of a nuisance to her, like a fly. But in this case, we actually need him, and she also tells Stannis that it’s not about this little war we’re fighting – it’s a much bigger threat, and it’s coming from the north. I think ninety per cent of the time she is right, but sometimes it’s a little blurry, and she can make mistakes. She did make a mistake, already, so that’s where we left her.

Is season four going to match three in terms of big moments?

Oh yeah. I haven’t read all the scripts because I’m a foreigner. It’s not easy material. Also, I really like to see it. But I know a few things. Obviously I’ve read the scripts that I’m in. We see a little bit more of a domestic scene between Melisandre and Stannis’s wife, in a scene that’s sort of funny, in a Game of Thrones kind of way. We see that she tries to get everyone to go to the Wall, to meet Jon Snow. The very last thing we see is her looking at Jon Snow for the first time, and she’s probably realising that there’s something with this boy. We don’t know yet what it is, but she’s trying to get everyone to go to the Wall, and she’s also dealing with Stannis’s daughter, who is a very bright little girl, and who’s not so much into the whole Lord of Light thing. She’s a little scared of Melisandre. She’s another nuisance, this little girl who is not on my team. Melisandre threatens her a little bit.

How much do you know about the fate of Melisandre?

Well, I sometimes go to the writers or the directors like (whispers), ‘Give me something!’ And they just give little hints, although I quite like to be surprised myself, but of course, just for my schedule, I’d like to know if I’m still alive in season six (laughs). But we don’t know. I have a feeling. My feeling says I might be around for a little bit, because what I like is the women are so powerful in this show. I love that.

How is it working as part of a cast with so many strong women?

In this fourth season I had a scene with Stannis’s wife, Tara Fitzgerald, and she’s great. She’s a lovely woman to work with. The female characters are strong and well written. I love that. Apart from my own character, that’s what I enjoy about this show.

I met George on the premiere of the third season in L.A., and he looked exactly how I’d imagined him, with the hat – exactly like the pictures you know of him. He reminded me a little bit of my father in a way. He’s one of those remarkable characters. And what an incredible mind he has – what is going on in there? What happened to this guy? It’s wonderful. So I was really pleased to meet him but at the same time I was scared that he was not going to be happy with what I did, but he was very complimentary. I was relieved, because he created this woman that I play. He created the extraordinary world that we all try and bring to the screen. He’s remarkable. So I was very relieved when he told me that he liked it.

When did you first realise how big the Game of Thrones fan base is?

I’d never have thought it was going to be this big. I never could have imagined this. I’m on Twitter, so that’s where I mostly find out that this is such a thing. I have followers – not because of my Dutch films, obviously – from Malaysia to the Philippines, to Egypt… They’re everywhere. It’s crazy.

Do people recognize you from the show?

I obviously look very different because of the red hair. People mostly think I’ll be older, which is good for me – that I probably look a little younger than I do in the show. That’s why I’m not stopped everywhere, which is great. I’m different from Davos or any of the guys. What’s very funny on Twitter is that I get all these sweet little notes from people, and then every once in a while there’s some little dork – just mean people – and I basically don’t go into that, but sometimes, I just say, ‘Don’t make me make another shadow baby,’ or something like that. It scares them. Most of the time, they are like, ‘Oh, I didn’t mean it like that!’ It’s very funny.

Who’s your favourite character apart from yours?

Oh God! I once tweeted, ‘I want to live in a world where Sam is king.’ I love this guy’s character. It’s hard because the storylines are so good for so many characters, so it’s hard for me to pick one. Apart from the obvious Tyrion, who is of course a wonderful actor and character, which I really like is played by Charles Dance [Tywin Lannister]. I love that acting. Also Joffrey! He might be one of my favourites because you just hate him.

Would you ever ask George how it ends?

Yeah I would, actually. (Laughs). It’s funny that you can get so obsessed by a show that you’re in. At first, when I was watching it, I was so distracted by my own acting, every time I came into the frame. I would be in the zone and then I would come on and I’d be like, ‘Oh fuck! There’s me. Just skip this scene.’ You know how actors are. But then it just got me.

So you consider yourself a fan as well?

Yes, I am a fan! I love the show. I’m like a lot of people around me that are like, ‘I’m not so much into fantasy.’ But I’m like, ‘It’s not fantasy.’ It’s a very smart soap. It’s Breaking Bad and Game of Thrones for me.

Where do you film?

Are the sets very impressive?

It’s great. When you come onto a set like that. It’s not just cardboard, it’s made of solid stuff. You’re like, ‘How did they do this?’ There are dragons inside the rocks! It’s beautiful. The costumes, too. Unfortunately, I’m only in red, I never wear anything else.

How does it fit in with your other commitments?

Season four was a light season for the Baratheons, which was good for me because I had a little more time, but it’s possible that season five is going to be a little bit bigger. Mostly I’m done in November, so I like to be here for a few days, then to go home to Amsterdam. As long as I have work for the first half of the year, I’m fine.

Have you got any projects coming up?

I released an album last year and I’m planning to maybe work on another one. I did a film called Incarnate, with Aaron Eckhart. It’s one of those small mini budget productions.