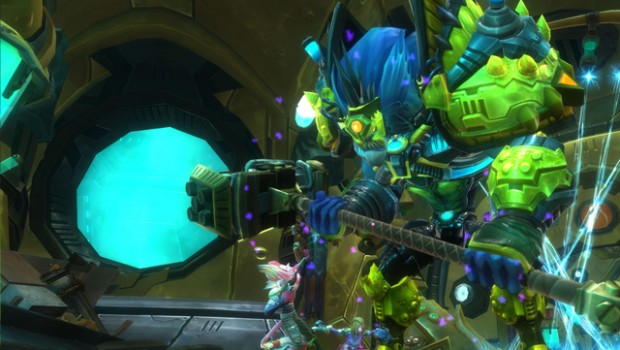 Sydney, Australia – July 1, 2014 – Carbine Studios is excited to announce that the first content update for its acclaimed MMORPG WildStar, the Strain Ultra Drop, goes live onJuly 2 (AEST), 2014! Players will quickly discover the horrible infection that has corrupted the planet – delivering a plethora of content for Nexus adventurers to uncover! Discovering the secrets behind this virus will not be an easy task, but in doing so, players will unlock the key to understanding the conflict between the enigmatic Drusera and the evil, wicked Entity.

The Strain Ultra Drop, laced with corrupted content dropping just one month post launch, brings players an impressive roll of content, including two Zones – one new and one existing zone compromised with infection, new solo, group, and public events. On top of that, Carbine has thrown in Strain themed décor items for housing, and mounts.

Blighthaven: Available for both Exile and Dominion players, Blighthaven adds new elements to the WildStar World Story. Dominion players discover that crazed Chua scientist Mondo Zax has established a secret testing facility in which he intends to isolate the Strain infection and weaponize it for use against the Exiles. Exile players will meet with the Mordesh scientist Victor Lazarin deep within the heart of Grimvault and help him study the region, looking for any clues that would help the Exile’s quest to cure the contagion plaguing the planet.

The Northern Wastes: The Ultra Drop also features the 2nd of WildStar’s new Post Cap Playspaces, level cap content that have public events and quests only available at Elder Game.

Northern Wastesare up for grabs, and both the Exile and Dominion players are interested in recovering people and goods from this area. Eldan augmented wildlife and the savage Moodies populate the area. Along with battling new enemies, Exiles can take a nostalgic trip to explore the wreckage of their crashed Arkship. Meanwhile the Dominion players can revisit Camp Icefury in their quest to reclaim the area and strengthen their faction’s presence at this Dominion stronghold.

Players can unearth the secrets of Drusera’s past when they visit her birthplace, The Nursery. In this mini-dungeon, players will fight together through the various elemental test chambers and learn more about Drusera’s past as they try and reach the Genesis Chamber. “Elyona the Mad,” a now Strain Corrupted Eldan Phage Lord, awaits players in the Exo Lab deep below Nexus.

At the heart of Blighthaven stands the Tree of Life, a tree planted by Drusera herself to cleanse the land of the corruption brought about by the Entity. The Entity has sent his servants to destroy the tree and reclaim his dominance over the land restored by the tree. Players must help Drusera and her Guardians of the Grove to protect the tree and repel the attackers – think tower defense-style game for 20 or more players in this new public event.

A Special Item for Subscribers…

Those hardy souls that have activated a retail key for WildStar by 7:01am on July 8 (AEST) will receive a special Strain “Squirg” costume item!

WHERE:          For more details on the Strain Ultra Drop, check out theweb page at http://wildstar-online.com/en/drops/1/strain/.