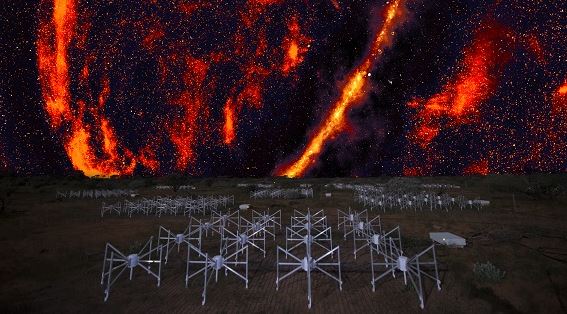 Imagine being able to see more than astronomers have ever been able to see before. What would it be like to peer back in cosmic time, into the vast blackness of space and witness how the universe has evolved into what we see around us today?

There’s a whole lot of sky up there. And not only are we starting to discover what’s in it, but we’re starting to see how it all fits together.

Capturing the Cosmos is a new show created by Melbourne Planetarium in partnership with CAASTRO, the Commonwealth-funded ARC Centre for All-sky Astrophysics.

In conjunction with Dr Tanya Hill’s talented team of animators and filmmakers, CAASTRO research has been brought to life in this stunning fulldome planetarium show which explores the earliest processes in the universe and the forces that have shaped it since.

Focusing on all-sky data collected from next-generation telescopes – such as the Murchison Widefield Array (MWA) and SkyMapper that feature in Capturing the Cosmos, CAASTRO brings together Australia’s and the world’s top astronomers to revolutionise the way we understand the cosmos.

“Each of these telescopes is helping us study key aspects of our universe,” says Dr Tanya Hill. “SkyMapper is helping us to understand Dark Energy. Dark Energy can’t be seen just like we can’t see the wind, but like a snowflake spiralling around on a windy day, you can see the effect that the wind has. Astronomers have seen the effect that Dark Energy has: it actually pushes space apart. What Dark Energy is, or how it works, we don’t understand yet, but all-sky astrophysics and telescopes like SkyMapper are set to help us to learn more.”

Meanwhile, the MWA is a radio telescope that explores the past.

“When we look up at the night sky, we are looking back in time. Light has taken so long to reach us that we are seeing things as they were millions or even billions of years ago. But there’s a limit. If we look back any further, we hit a time that astronomers call the Dark Ages, that we can’t see into. The MWA is going to be one of the first telescopes that can peer across the Dark Ages and help us understand how the first stars and galaxies lit up the universe.”

Capturing the Cosmos is the result of a two-year collaboration between Museum Victoria and CAASTRO, and its launch will be a major collaborative effort that spans across the country to reach out to the stars.

“CAASTRO tackles big questions that can only be answered by observing a large part of the whole southern sky, so it’s exciting to be able to use the ‘big sky’ aspect of a planetarium show to tell the public about our work.” says CAASTRO Director Professor Elaine Sadler.

“I hope this planetarium show can convey some of the wonder of the Universe we live in, and the big questions that CAASTRO astronomers are working to answer.”

To mark this special event, Capturing the Cosmos will be launched from Melbourne Planetarium at 7pm Monday 21 March (AEDT) and will be released nationally across Australia.

Events and education programs will be held at Planetaria including: Scitech Planetarium in Perth; the Sir Thomas Brisbane Planetarium in Brisbane; the Queen Victoria Museum and Art Gallery Planetarium in Launceston; the Wollongong Science Centre and Planetarium; the Sydney Observatory and Adelaide Planetarium. This is the first time a planetarium show has ever been launched with a nationwide release.