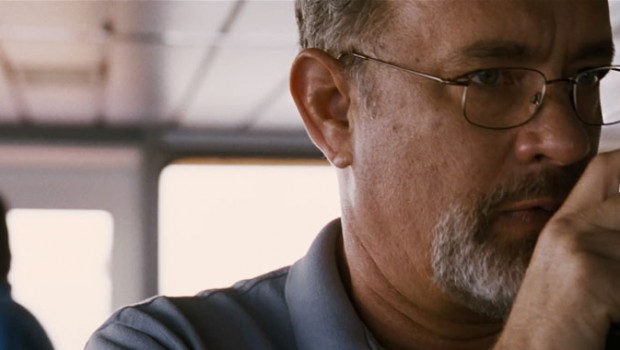 In 2009 the cargo ship Maersk Alabama was carrying food aid towards the countries of Somalia and Uganda. Twenty crewmen were on board the ship, which was skippered by Captain Richard Phillips. The ship came under attack by four Somali pirates, who boarded the vessel and threatened some of the crew with assault weapons. The majority of the ship’s crew hid in the engine room, while Phillips and two others faced the pirates. After encountering resistance from the remaining crew, the pirates took Phillips hostage into a lifeboat.

Paul Greengrass (United 93, Green Zone) and screenwriter Billy Ray adapt Phillips’ book “A Captain’s Duty: Somali Pirates, NAVY SEALS, and Dangerous Days at Sea” and opt for a straight and conventional retelling of these events, rather than expanding and deepening any broader philosophical and sociopolitical goals. The film’s subtext, characters and its thematic purpose feel secondary to the action. It asks what Greengrass looked to achieve with this footnote of much wider and global problems. The setup exposes minimal details about the personal lives of the characters. Tom Hanks plays Phillips, who is driving with his wife (Catherine Keener) to the airport for this trip. The city is orderly and functional and they discuss how their children will have to work hard to be the best at their jobs. This scene is contrasted with the arid landscape of Somalia, where young men are stood over by armed thugs and ordered to steal a boat. The juxtaposition of economic pressures provides the basis of a fascinating film that never eventuates. The film’s production notes state the film is about the problems of globalisation, the haves and have nots. Yet sizeable issues, such as the way major vessels are taking Somali fishing spots, are reduced to singular, passing lines of dialogue. The film’s overlong final standoff scenes would also have had more power if there were stronger contexts for the pirate characters, rather than simple archetypes. 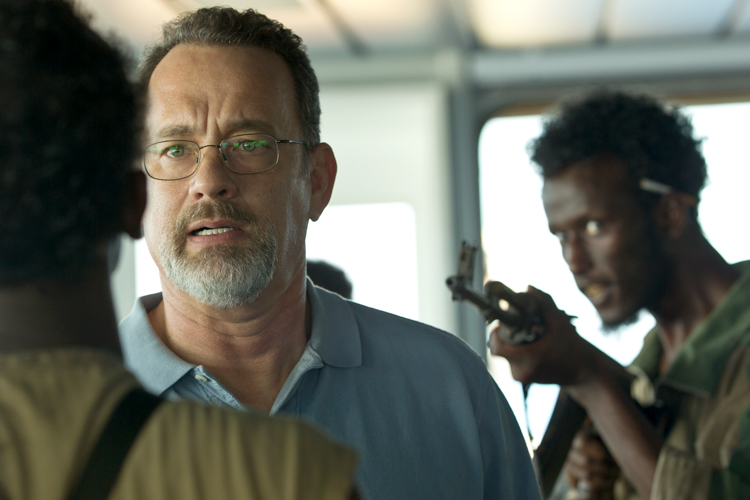 One of the other major compromises Greengrass makes is his refusal to divorce the film from conventional Hollywood stylisations to build the tension. His techniques seem predictable. In the first attack scene, there are close-up shots of the radar pulse, showing the pirate speedboats moving in close to the vessel. The film also uses crosscutting to show the panic on the ship as the crew moves to the engine room, while the pirates struggle to throw their ladder over the side of the vessel. Despite one jump moment, I expected the film to be a lot tenser than it was. The dilution of the tension could be due to Greengrass’ decision to shoot the film in his trademark jittery handheld style. While the camera tightens on the faces of the actors, the erratic movements and constant wobbling are atrocious and serve no stylistic or thematic purpose. Some of the hide and seek battles between the crew and the pirates are still interesting, such as when they realise the pirates aren’t wearing shoes and throw glass traps on the ground or send the lower decks into darkness. It is also a minor achievement that the film subdues Tom Hanks’ recent self-consciousness, minimising his performance to be more controlled. In a mostly linear and contained story, without much personal backstory, Phillips isn’t a hugely interesting character and Catherine Keener seems like wasteful casting, featuring in just a cameo appearance. 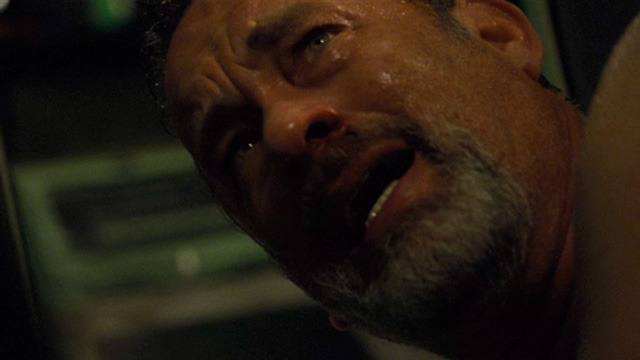 I preferred the way the recent and superior Danish film A Hijacking (Kapringen) didn’t linger over the danger of men with guns the same way that Captain Phillips does. It’s a smarter film that uses its crosscutting to forge a battle between professionalism and raw emotion. The tension is drawn from the way personalities boil over in the negotiation process. Captain Phillips is meant to be about the cultural clashes and competitiveness of today’s economic climate and the way that motives clash under the wrong circumstances. While Greengrass doesn’t entirely vilify the pirates, he still keeps them at arm’s length like he did with the terrorists in United 93. This is in spite of an immersive, believable and intimidating turn by first time actor Barkhad Abdi as Muse the pirate leader. What is unusual about the anonymity is that in the film’s climax he attempts to make the pirates seem tragic in the face of the Navy’s extremism. These are young fools but still young fools branding machine guns and putting people in headlocks. Surely that deserved more time and examination than some of the endless shots of military hardware in the final quarter. The real Captain Phillips has said publicly that he never felt sorry for the pirates either. Additionally, a lawsuit from 2009 is still proceeding, with the crew suing the shipping company that owns the ship for ignoring warnings and putting the crew in danger. The film would have been more satisfying if it were more than its title.

Summary: The film would have been more satisfying if it were more than its title.