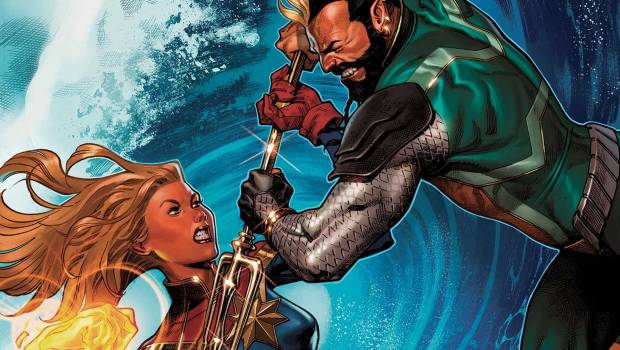 Summary: Not quite what is promised on the cover but a good jumping off point for this series if you are coming to it a first time.

Captain Marvel is trapped in the ruins of New York on an alternate Earth where the Avengers lost a war and in the follow up war somebody pushed the button out of spite to stop the aliens from winning.

Despite what the cover shows, this story is mostly just setting up this storyline with one of the characters mainly explaining the events that led to this outcome and Captain Marvel going around gathering her team from the survivors.

Don’t be fooled by the big set piece on the cover, as usual with these it depicts and event that does not actually happen in this particular story at least. I am sure they just wanted to show off the artwork and not just have a box that says “all exposition” on the cover.

If you are a fan of this character and want to see them in a new storyline I would recommend it and also it seems a good enough entry on which to start reading from this point as they explain the back story fairly well which is not often the case in these series.