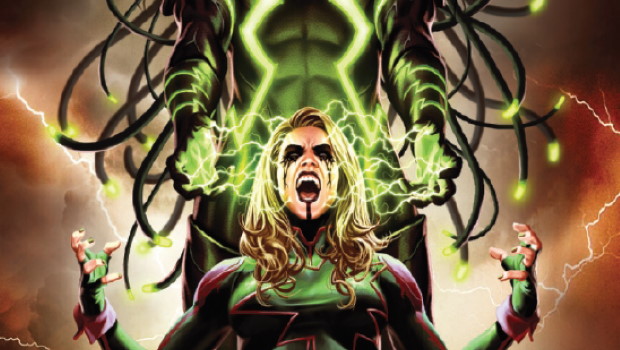 Summary: Carol Danvers continues trying to do the right thing while tasked with a horrendous goal, kill the avengers and bring them to Vox Supreme... or else! But it's never that simple.

Captain Marvel has to kill five Avengers in 24 hours, that seems like an impossible task at the best of times, but when it has to be done and the bodies of the Avengers then brought to Vox Supreme there’s clearly more to this simple, if horrific, task and Carol Danvers is running out of time to find out what’s going on and stop it.

You can’t get much more of a dangerous situation to start a comic than a conflict with a Hulk! Carol has been going through the list of Avengers to take out and provide to Vox Supreme… but She Hulk was always going to be a particular big challenge. Even just in that first battle we see the difficulty Carol faces… she’s tasked with taking down Avengers, her friends. That is made abundantly clear in Carol’s little comment about how with “the others, there was always an edge that I could take away…. with Jen, there’s just…. Jen”. That knowledge and understanding of who she is up again shows the depth of understanding she has of the person she has regrettably been forced to fight. That sense of reluctant duty is continued with her next big challenge also facing down the first Avenger.

The artwork here is fine… it’s nothing special but it’s certainly not bad either. Nice clean and clear images throughout and a cover that looks like it belongs on a heavy metal band album cover.

As a philosophy major I can appreciate the moral conundrum Captain Marvel finds herself in here. She can either refuse to kill the Avengers and watch as Vox Supreme sets off bombs killing countless humans on earth… or she can prevent the bombs being used by killing the five Avengers and bringing their bodies to Vox Supreme. Readers can debate where Carol’s moral responsibility lies… whether she can/should be held accountable for killing Avengers, if she is only doing so in order to prevent the deaths of innocent humans or whether she should be excused for trying to act with the greater good in mind.
An interesting read and worth grabbing if you want to follow the whole story… it’s a great method of arguably taking away the power of one of the most powerful heroes around… or at least constraining how that power can be used. Pick up a copy if you like a bit of philosophizing with your comics.