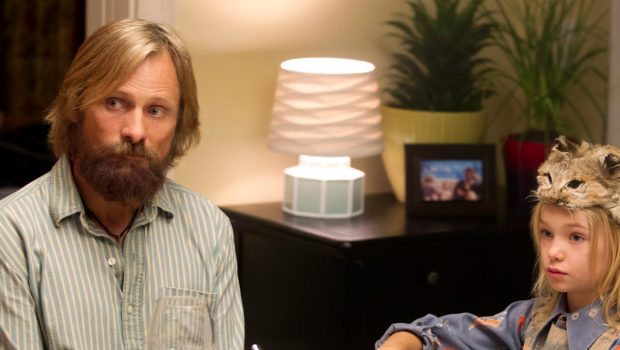 Honesty is a rare feat in cinema, but Matt Ross finds it in Captain Fantastic, reflecting the progressiveness of its male protagonist Ben, played by Viggo Mortensen, who has raised his children away from the civilisation of the city and within the primal, survivalist forest. It is the news of the death of their mother, which brings them towards the city, traveling by a bus nicknamed ‘Steve’ on a journey of self-discovery, growth and inner reflection.

The heart and humour of Captain Fantastic strikes familiar tonal grounds to the dysfunctional family comedy Little Miss Sunshine, as Ross presents a family with unconventional relationships. The opening of the film pans over the tops of the treetops, before landing upon a child killing a deer as an “act of manhood”; it is a sudden yet stark realisation of the unorthodox parenting method dictated by Ben. Instead, Ben honours his children’s intelligence, where a campfire sequence sees them reading novels like ‘Middlemarch’ and offering insightful analysis about the novels, as well as climbing rocky mountains and teaching them first-aid. But while it is a presentation of anomalous relationships to its audience, the film’s distinctiveness—such as their notable celebration of Noam Chomsky Day—is nevertheless able to offer an affecting tale through its wit and heart.

It is perhaps the untraditional premise that provides the film with a fresh perspective on the mode of education we are taught by, suggesting there may be alternative pathways that we should not be so quick to judge. But Ben’s questioning of his own uncompromising methods concurrently sees a re-examination of a ‘proper’ family, where this conflict is exacerbated by a cleansing motif, which portrays Ben undergoing water cleansing by nature (waterfall) and mankind (shower). The disconnection from ‘real-life’ also creates an inherent tension between socially accepted norms and self-taught values, manifesting into emotional strains within the tight-knit family and beyond.

Ironically, the film suffers from its conventional approach to its off-the-grid concept. It follows an oddly linear approach, where the main events of the film are weirdly predictable and soundly familiar, such as when the grandparents of the children hold an intervention to claim custody of the children over Ben. The authenticity of the film is resultantly sacrificed by this, further reinforced by Ross’ need to neatly bow-tie his film without proper explanation or reasoning. The film’s attempt to find a middle-ground for all parties involved feels out-of-character, especially for the notoriously stubborn Ben, whose values seem to change little throughout the film’s running time. Despite feeling slightly contrived, it is the performances and the ability to fuse sharp wit into the film that sees Captain Fantastic remain poignant and compelling enough to root for Ben and his family until the very final scene.

Summary: Despite feeling slightly contrived, it is the performances and the ability to fuse sharp wit into the film that sees Captain Fantastic remain poignant and compelling.