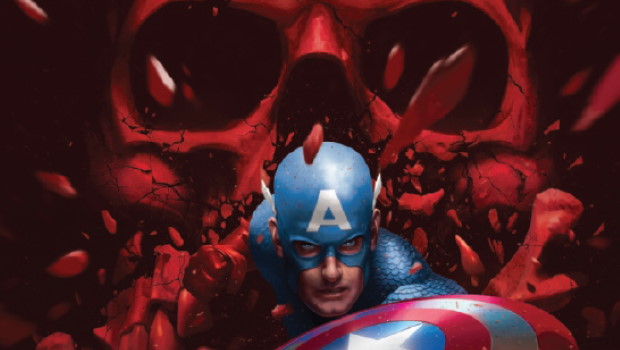 Summary: Captain America fights against a seemingly endless horde of Red Skulls in a post-apocalyptic wasteland... can he survive?

Steve Rogers is doings his best to survive a horde of Red Skulls in a post-apocalyptic wasteland. With seemingly no end in sight and no regular humans left… is this the end of Captain America?

These single shot “The End” comics have been an interesting exercise in story telling and exploring the heroes they follow. Unfortunately in this case I found the story to be a bit, bland. There’s nothing wrong with it per se… and it’s more than likely it’s just my personal taste but it just seemed like all those people who have complained that there are too many super hero movies these days (because apparently there isn’t anything else they could watch), can now deal with that genre being mixed with the other genre that seems omnipresent at the moment, zombies. The story basically has Captain America in a world that has “gone to hell”… every person Captain America encounters has been “infected” and transformed into the Red Skull. If you have watched any zombie movie you probably have a reasonable idea of how the rest of the story will go.

Much like the writing I found the artwork to be quite meh. Again there’s nothing technically wrong with it… I just didn’t really find it to my taste. There’s a decent use of colour and the line work is nice and clean… but if there is one panel that exemplifies my lack of enthusiasm for the art it’s a single page panel close up of Captain America’s head and the shading is done in a way that actually makes it look like one of those plasticized bodies by Gunther von Hagens in which you can see the musculature of the face.

If you are a big Captain America fan… perhaps this is still something you want to add to your collection. The fact it’s a complete story, you don’t need any other issues to get the whole story might be an appeal to some. For me, I’d let this one go, it didn’t grab me or really add any interesting element to the character.