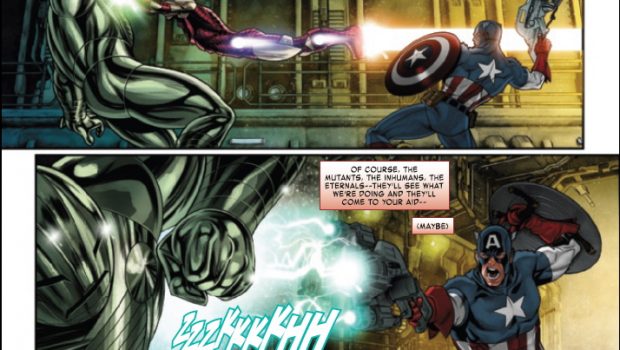 Summary: Maybe if you are a big fan of either of the two main charcters, but maybe go back and read the first two issues in this series or you will be lost.

Captain America and Iron Man are continuing their adventures but this is not the regular Avengers and there is a different threat they are dealing with this time. Instead of the Avengers they have some trainees known as the Paladins including one who is a brain in a robot body. They track down the stolen SHEILD helicarrier but are ambushed. Will they be able to make it out?

This is only the third entry of this series and already felt like I had missed enough to have large gaps in the story. The action wasn’t so bad but I didn’t really know who was what and why they were doing this.

It is good to see a new group of heroes as an alternate Avengers and having Iron Man and Captain America as a buddy team works well.

I would recommend this one if you are a fan of either of these characters, but maybe go back and read the first two issues of this series or you would not know what is going on that much.