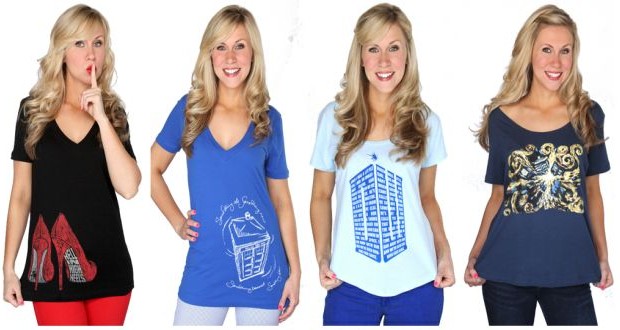 Actress and entrepreneur, Ashley Eckstein, the voice of Ahsoka Tano from Star Wars: The Clone Wars, and ReedPOP are once again partnering up to bring Eckstein’s fangirl fashion apparel company, Her Universe™, to ReedPOP fans. And this time they’re going international. For the first time ever, Her Universe merchandise will be available for purchase at Oz Comic-Con Melbourne, Brisbane and Sydney and Eckstein herself will join the fun for Oz Comic-Con Brisbane and Sydney.

“We’re excited to bring Her Universe to Oz Comic-Con for the first time ever,” said Eckstein. “Together with ReedPOP we are looking forward to recognizing the fangirls in attendance with a special Her Universe boutique within the Oz Comic-Con store.”

For more information and tickets to Oz Comic-Con, visit OzComicCon.com.

Her Universe was launched in 2010 by actress and entrepreneur Ashley Eckstein and The Araca Group, a leading theatrical production and brand management company. Ashley and Araca created Her Universe to address the expanding market of female sci-fi and fantasy fans. They entered their first agreement with Lucas Licensing to develop and produce a line of female-centered Star Wars apparel and accessories. The success of that line was followed up with a collection for BBC Worldwide for Doctor Who, CBS Consumer Products for Star Trek, AMC for The Walking Dead, Marvel Entertainment, Nerdist and Hasbro Studios for Transformers. You can learn more about Her Universe and purchase the current line of fangirl apparel and accessories by going to www.heruniverse.com and by following Eckstein & Her Universe on Facebook (facebook.com/HerUniverse) and Twitter (twitter.com/HerUniverse).