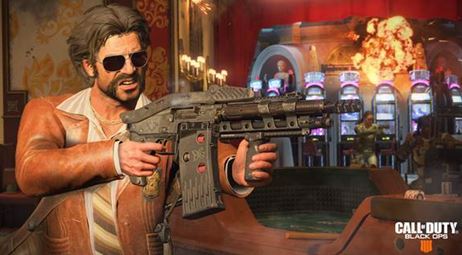 Feb. 20, 2019 – Strike it big in the Grand Heist! The newest seasonal event and community celebration for Call of DutyÒ: Black Ops 4 is available now on PlayStation®4, with other platforms to follow. Titled Operation Grand Heist, the all-new season of content features updates across the game, including a new Specialist, two brand-new Multiplayer maps, new playable destinations across the Blackout map, as well as a wide variety of personalisation items, accessories, new vehicles, new game modes  and much more.

“With Operation Grand Heist, the team has packed in an incredible amount of new content, and we can’t wait for fans to jump in and check it out,” said Dan Bunting, Co-Studio Head, Treyarch. “We love the 1970s-style heist theme of this Operation, and the fast-paced action that it brings to Blackout and Multiplayer, along with the brand-new Zombies experience following in March.”

“One of our favourite things at the studio is creating new ways for the community to play,” said Mark Gordon, Co-Studio Head, Treyarch. “We set out since day one to support Black Ops 4 long after launch, so we’re delivering a ton of new ways for players to engage with each mode of the game and we’re committed to giving fans new reasons to keep coming back week in and week out.”

Additionally, the Zombies experience Classified, previously only available as part of the Black Ops Pass, is available now for all players to purchase as a standalone map. Classified features the “Ultimis” cast of characters in a chilling, survival experience as they fight the undead and investigate The Pentagon after mysteriously being teleported there.

Call of Duty: Black Ops 4 is published by Activision and developed by Treyarch with additional development support from Raven Software and PC development with Beenox. For the latest intel check out: www.callofduty.com, www.youtube.com/callofduty and follow @CallofDuty and @Treyarch on Twitter, Instagram and Facebook.  The game is rated MA15+ for Mature (Strong supernatural themes and bloody violence, online interactivity).