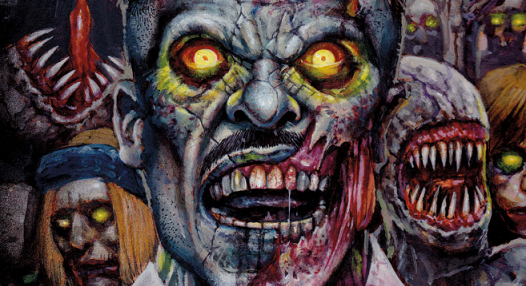 Summary: Shooting zombies has never been so boring. 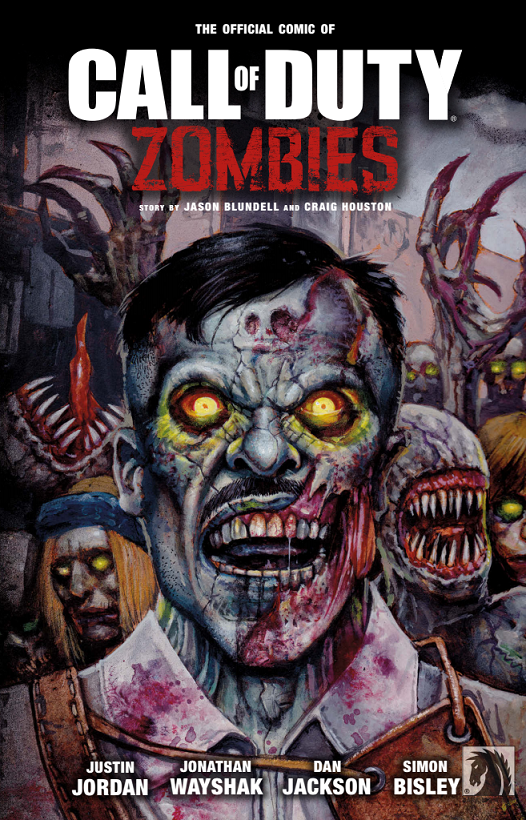 Based off a map in the ‘Zombies’ game mode in Call of Duty: Black Ops 2, Call of Duty: Zombies begins with a narrator surmising that the modern world has collapsed under a plague of ‘reanimates’ (annoyingly, the word ‘zombie’ is never used, despite being in the title). We’re also briefly introduced to our four protagonists: Misty, a quick-witted sharpshooter; Marlton, a socially-inept engineer; Russman, a seemingly deranged vagrant; and Stuhlinger who is plagued by the voice of the narrator, that reveals himself to be Edward Richtoften. Anyone that has played the ‘Zombies’ mode in Call of Duty: Black Ops 2 should recognise these characters and piece together that this story takes place after the conclusion of the ‘TranZit’ campaign.

Immediately after the introductions, we get our first taste of two annoyingly prevalent themes in Call of Duty: Zombies: highly detailed close-up depictions of zombies being shot in the head, and our crew of protagonists running away from an undead horde. After a number of mildly interesting action sequences filled with zombie headshots, the team encounters what appears to be a sentient zombie dressed in a military uniform (that looks an awful lot like a Nazi uniform, sans swastikas) controlling the zombie horde. The crew retreats into a bunker and moments before a wave of zombies break through the barricades, a portal is summoned and the crew escapes, thus ending the first chapter. 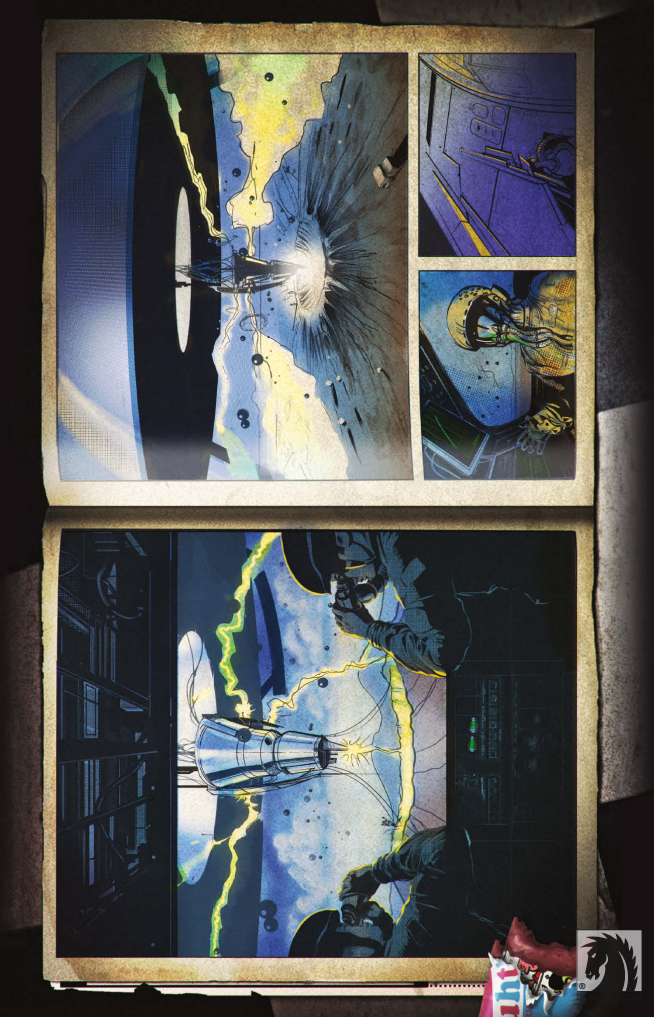 Three pages into the second chapter and the crew are on the run again, as the zombie horde simply followed them through the same portal of which they arrived. And really, it isn’t until the cliff hanger ending of chapter three that Call of Duty: Zombies starts to get interesting. Without going into detail, things finally start to slow down and our characters get a chance to breathe and interact with one another. It’s in these moments that we get some rather compelling character development, but unfortunately these moments don’t last long enough and our protagonists are soon once again fleeing from the zombie horde through to the end of chapter five. It’s in the final chapter (book six) that the bulk of the narrative is revealed with a rather heavy exposition dump, before ending with an obvious setup for a potential second series.

It’s unfortunate that there wasn’t more page space devoted to meaningful character interactions, as each of the main characters have rather intriguing personalities and background stories that would be worth delving into. Similar can be said about the narrative dump that occurs in the final chapter. The story would have been far more compelling if there was a balance between character development, action and world building spread throughout each chapter. 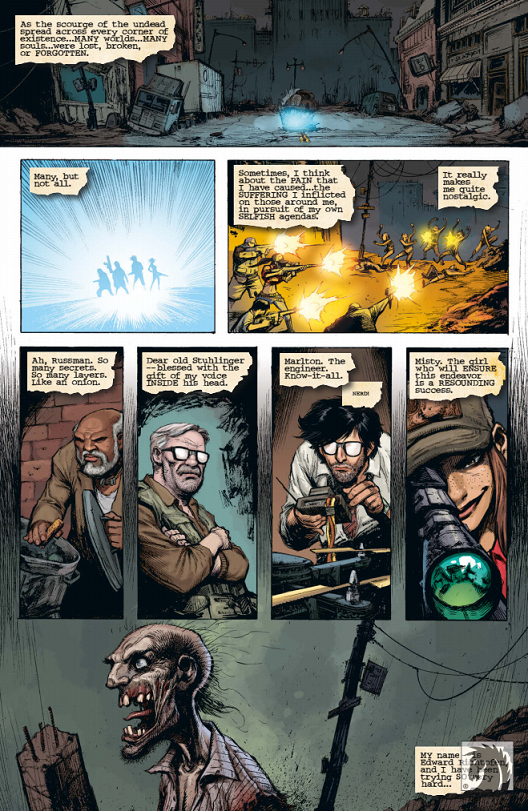 As dull as the narrative and story elements are in Call of Duty: Zombies, the artwork doesn’t do much to make the read any more interesting. The character designs remain faithful to their depictions in the video game (which is to say that they all look like plain-old, regular people) and the zombie designs aren’t particularly exciting either, when compared to some horrific designs we’ve seen in similar comics. Though perhaps most distressing of all is that the guns that are featured heavily throughout each chapter are often crudely drawn and scarcely detailed – a sin for a comic book based on the Call of Duty franchise that is known for heavily fetishising weaponry.

However there are a few positive lessons to take away from the artwork in Call of Duty: Zombies. The first is the impact that great inking can have on a scene. A number of panels featuring close-up views of zombies utilise ink spattering and strong lines to make the zombies look gloriously putrid. This is accentuated by the cohesive use of dark, washed-out colour tones to make the world feel desolated and the zombies menacing, whilst also making the bright colours of explosions and portals more impactful. There are also a number of highly detailed, hand-drawn character portraits breaking up each chapter (one of which is featured on the cover) that have a cool, unique look to them. 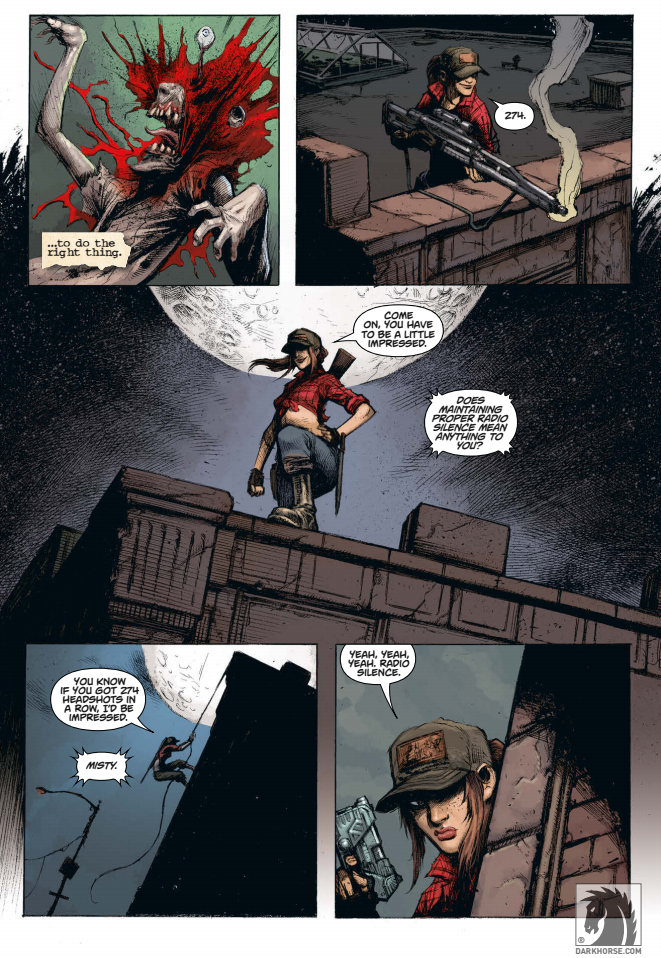 Whilst I will acknowledge that the source material may not have given the authors much room for creative freedom, Call of Duty: Zombies just feels like a phoned-in, missed opportunity. Treyarch created a bizarre, intricate world of time travel and mysticism in the ‘Zombies’ campaigns in the Call of Duty Black: Ops video game series – very little of which is explored in this comic book adaption. Which brings me back to the questions posed at the beginning of this review and has me wondering who this comic book was made for. Call of Duty fans won’t get much from the lore, comic book fans won’t get much from the artwork or story, and fans of zombie fiction will be left hungrier than a horde of reanimates. Give this one a miss.