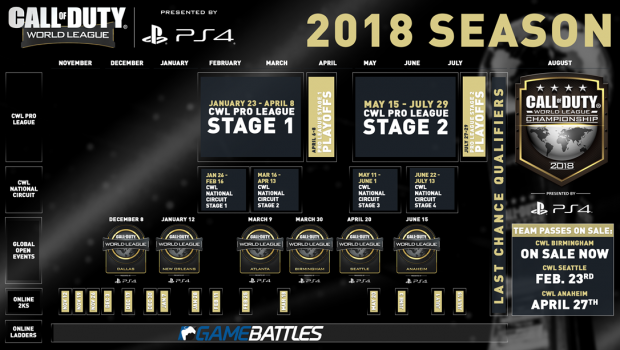 Teams from Australia and New Zealand can now sign up to the Call of Duty® World League National Circuit to prove who has the best team down under and have a chance at competing to qualify for future 2018 CWL events. Last year’s CWL carried an overall season prize pool of $4.2 million USD, the largest in Call of Duty eSports history.

You can sign up for the CWL National Circuits in Australia and New Zealand from now until January 23 at 10am AEDT.

See the official 2018 CWL calendar below. You can view further information about the CWL National Circuit signups and eligibility, regular season schedule and format, playoffs and relegation, and prizes here.

We encourage ANZ teams to compete and enjoy the 2018 CWL National Circuit when it makes its debut on January 26, 2018!

For more intel about Call of Duty® World League, be sure to visit here and follow @CallofDuty and @CODWorldLeague on Twitter.