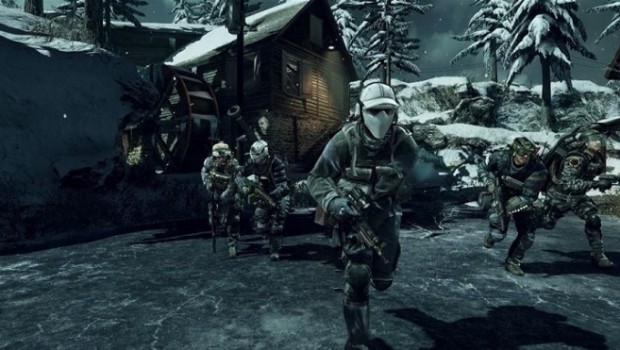 IT’S TIME TO HAVE YOU SOME FUN AS CALL OF DUTY: GHOSTS  DEBUTS THE PREDATOR IN NEW DEVASTATION DLC PACK AVAILABLE TODAY FIRST, EXCLUSIVELY ON XBOX LIVE

The Second, Massive DLC Pack for Call of Duty: Ghosts Continues the Definitive Online Experience Featuring Four New Multiplayer Maps, the Tactical 2-in-1 Ripper Weapon, the Next Chapter in the Episodic Extinction Story, and Features One of Hollywood’s Most Fearsome Action Film Characters – the Predator

The Devastation DLC Pack is Available Individually for a Suggested Retail Price of AU$19.95,

Sydney, Australia, April 4, 2014 – Devastation, the latest DLC Pack for Call of Duty®: Ghosts is available today first, exclusively on Xbox Live for both Xbox One and Xbox 360.

Adding a host of new content to the game’s definitive online multiplayer experience, Devastation features four new, small-to-medium multiplayer maps, the all-new tactical 2-in-1 “Ripper” SMG/Assault Rifle, and “Episode 2: Mayday” – the second installment in Call of Duty: Ghosts’ thrilling episodic Extinction story that follows mankind’s fight for survival against the Cryptids. And of course, let’s not forget one of the most fearsome, iconic characters from Hollywood action film history, the Predator!

Additionally, in celebration of today’s Call of Duty: Ghosts Devastation DLC launch, Activision, Infinity Ward and Xbox are hosting professional football players A.J. Green of the Cincinnati Bengals and LeSean McCoy of the Philadelphia Eagles in a Call of Duty® Grudge Match for the ages. Each player will captain a team of hardcore Call of Duty fans and members from the development team at Infinity Ward in a no-holds-barred bout. Fans can see match highlights on the Call of Duty Facebook page at www.facebook.com/CallofDuty.

“Devastation is another incredible offering for fans to sink their teeth into,” said Daniel Suarez, Vice President of Production, Activision Publishing, Inc. “With an array of new maps tuned for the fast-paced, run-and-gun action Call of Duty is best known for, new weapons in both multiplayer and Extinction mode, the next chilling entry in the game’s Extinction story, and now the Predator – Devastation continues the unparalleled season of Call of Duty: Ghosts post-launch content.”

“Activision and Infinity Ward have done a tremendous job in bringing the Predator to life within Call of Duty: Ghosts,” said Mike Doyle, Head of Fox Interactive Games. “The Devastation DLC Pack was a perfect opportunity to pair two incredibly iconic and complementary brands – Call of Duty and Predator, and we’re extremely pleased with the explosive result.”

Call of Duty: Ghosts Devastation also brings fans “Episode 2: Mayday” – the next chapter in the ongoing episodic Extinction story. In the aftermath of the events at the Nightfall Program facility in the Alaskan wilderness, the Quick Reaction Force boards a mysteriously abandoned Chinese research vessel adrift in the South Pacific Ocean. Armed with multiple, mod-able versions of the Venom-X weapons that harness the power of Cryptid technology, players will pursue Captain Archer in an attempt to uncover what’s become of Dr. Cross, all while battling against a new Cryptid enemy called the “Seeder”, and culminating with players facing-off against a massive, 400-foot tall Cryptid beast from the deep – the “Kraken.”

Devastation also arms players with the tactical 2-in-1 “Ripper,” a new hybrid SMG/Assault Rifle, and a formidable addition to Ghosts’ weapons cache. The “Ripper” is the perfect complement to Devastation’s new multiplayer maps, providing players two different configurations – medium to short-range capability as an SMG, and medium to long-range as an Assault Rifle. The “Ripper” is a one-of-a-kind weapon in Call of Duty, having the unique ability to convert from SMG to Assault Rifle and back again on-the-fly in the midst of battle, giving players unprecedented flexibility to adjust to a variety of map types and tactics.

From Activision Publishing, Inc., a wholly owned subsidiary of Activision Blizzard, Inc. (Nasdaq: ATVI), Call of Duty: Ghosts is rated “MA” (Strong Violence) by the Classification Board of Australia. Call of Duty: Ghosts Devastation is created by Infinity Ward, with additional development by Neversoft, and is available for the Xbox One – the all-in-one games and entertainment system from Microsoft, and the Xbox 360 games and entertainment system from Microsoft, with other platforms to follow. For more information, please visit the game’s official Web site at www.callofduty.com/ghosts. Additionally, follow us on Facebook at www.facebook.com/CallofDuty, and on Twitter @InfinityWard.