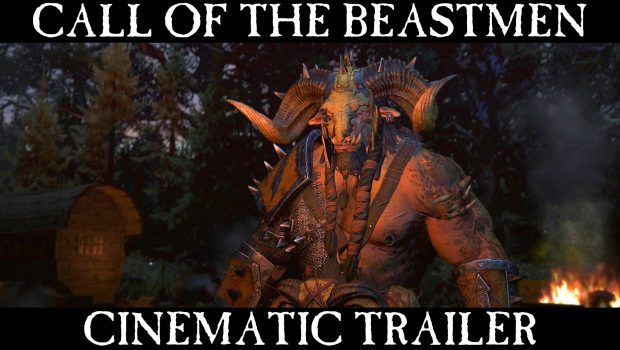 Call of the Beastmen announced as first downloadable Expansion for Total War: WARHAMMER

As the Warherds gather in the forests of the Old World, all prepare for the coming of the Cloven Ones. Emerging from their woodland lairs to cast down the Empires of Man, they aim to reclaim that which was once theirs. As relentless as they are brutal, they will not rest until the realms of men are destroyed and the Call of the Beastmen is heard across all of The Old World.

Call of the Beastmen, the first Campaign Pack for Total War: WARHAMMER, introduces the Beastmen as a new playable race and further expands the game with a brand new Story Campaign. A feral, Chaos-tainted horde race, they move like a plague across The Old World, wielding the deadly Lore of the Wild and fielding half-human aberrations and colossal beasts in battle. The Beastmen are playable in the Grand Campaign, custom and multiplayer battles, and in their very own custom Story Campaign, ‘An Eye for an Eye’.

With a uniquely aggressive horde-style campaign game, the Beastmen are masters of unconventional warfare both on and off the battlefield. They feature an array of unique gameplay mechanics, including the ability to travel through overgrown Beastpaths to outmanoeuvre unsuspecting foes and, through a dark bond with Morrslieb, the Chaos Moon, perform twisted acts of faith to gain its favour.

Alongside the Call of the Beastmen Campaign Pack, another free content update will introduce a brand new Lore of Magic and an accompanying Hero unit for The Empire. Perhaps the most rarely seen of all Wizards, the solitary Amber Wizards are no less powerful than their more prevalent counterparts. Wielding the deadly Lore of Beasts they are able to perform unique feats of magical power, from enchanting their allies with impenetrable pelts to summoning a manticore from the bowels of the earth. Call of the Beastmen is coming July 28th across all platforms. Pre-order now and receive 10% off [http://store.steampowered.com/app/404012/]

Total War: WARHAMMER is the fastest-selling Total War ever, and is out now. For more details visit www.totalwar.com