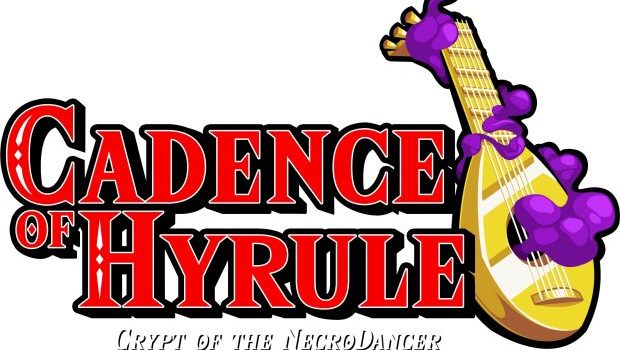 Cadence of Hyrule: Crypt of the Necrodancer featuring The Legend of Zelda Review

Summary: Cadence of Hyrule combines Crypt of the Necrodancer's unique rhythm-based combat with the Legend of Zelda's sense of adventure

Cadence of Hyrule is one of those games that, despite beating it, I still can’t believe actually exists. When the world was first introduced to Cadence of Hyrule on a Nintendo Direct, it seemed like a cruel joke. The idea was so exciting, but surely there was no way Nintendo would actually grant an indie developer permission to use the Zelda franchise to create a bizarre rhythm-based adventure game. A few months later Cadence of Hyrule: Crypt of the Necrodancer featuring The Legend of Zelda is released, and it is every bit as glorious as I was hoping for. 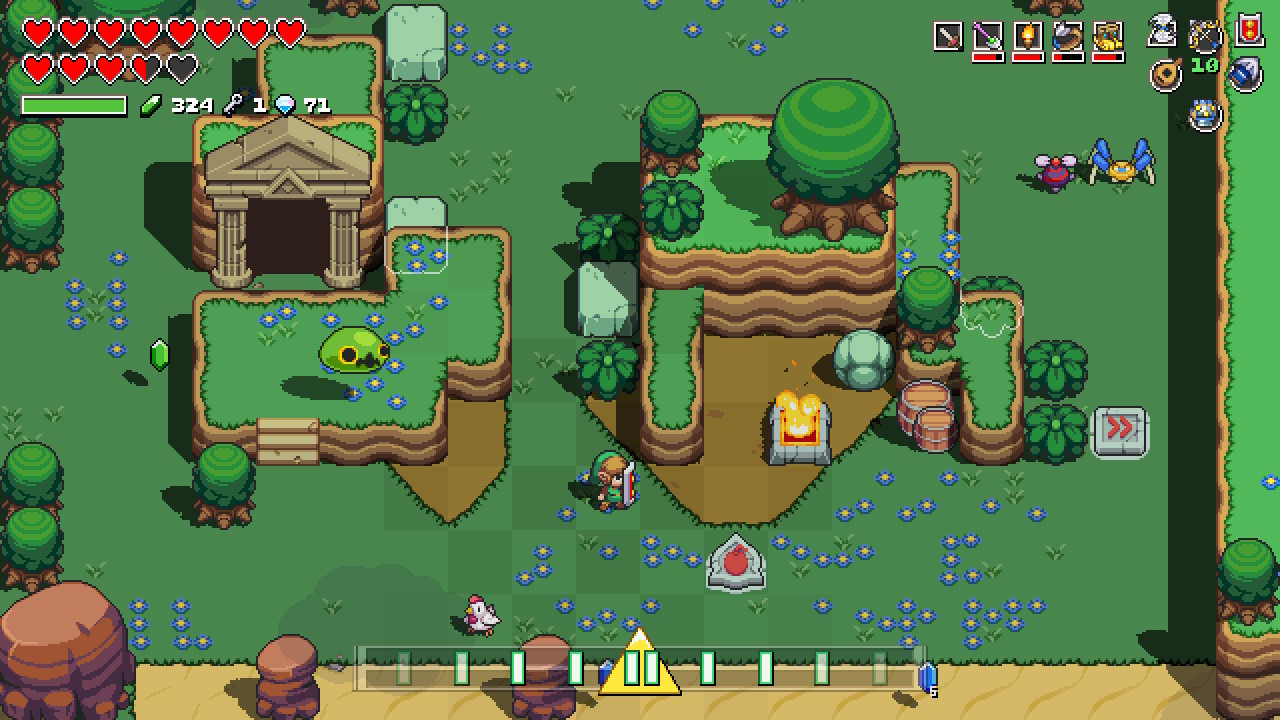 Cadence of Hyrule combines the classic open-world adventuring of Zelda: A Link to the Past with the procedurally-generated, beat-driven gameplay of Crypt of the Necrodancer. Never heard of Crypt of the Necrodancer? It’s a fantastically unique, roguelike, dungeon-crawler released in 2015 where every action must be executed to the beat of the background music. If all those jargon pronouns have you feeling a little confused, don’t worry; Cadence of Hyrule makes perfect sense after a few minutes with it. 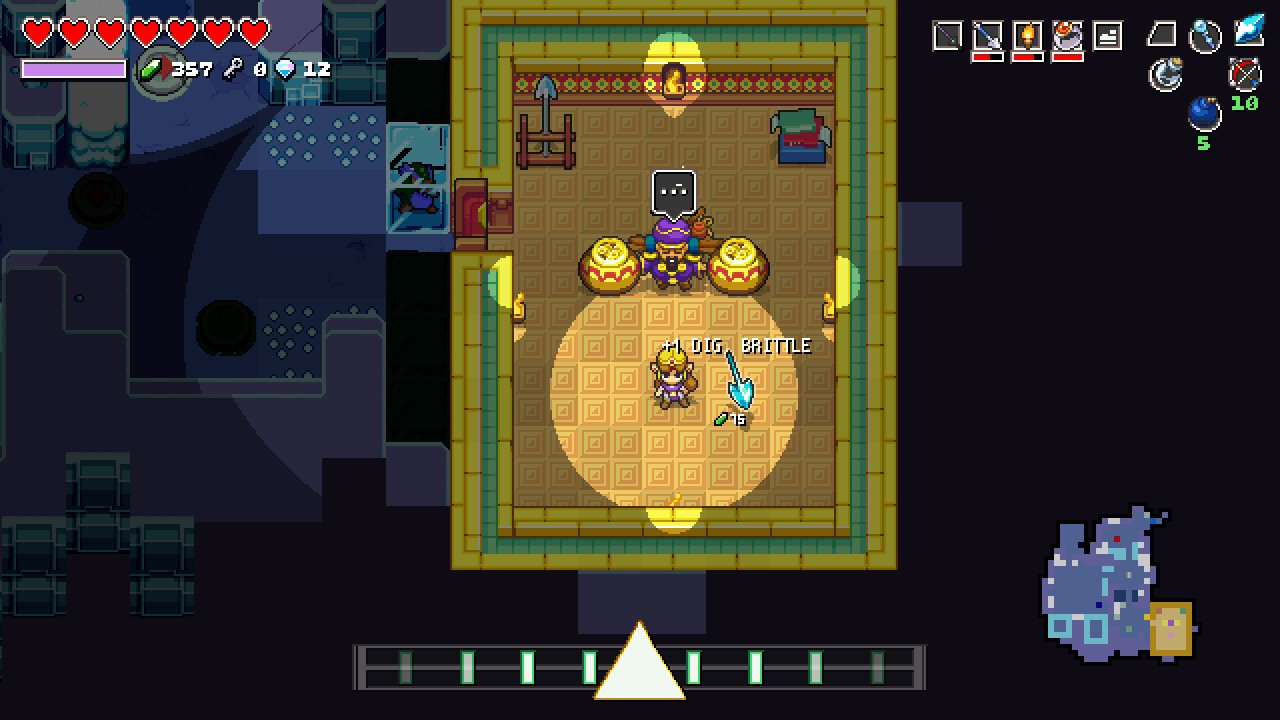 Cadence of Hyrule begins with Cadence, heroine protagonist of Crypt of The Necrodancer, falling through a strange portal that brings her into the world of Hyrule. Here she finds that the evil mage Octavo has used the Triforce to put Zelda, Link and the king of Hyrule into a deep sleep. You are then given the choice to wake either Zelda or Link and play as that character while Cadence departs on her own quest to return to her home world. As Link or Zelda, you must explore Hyrule to find and defeat each of Octavo’s four champions before confronting Octavo himself. 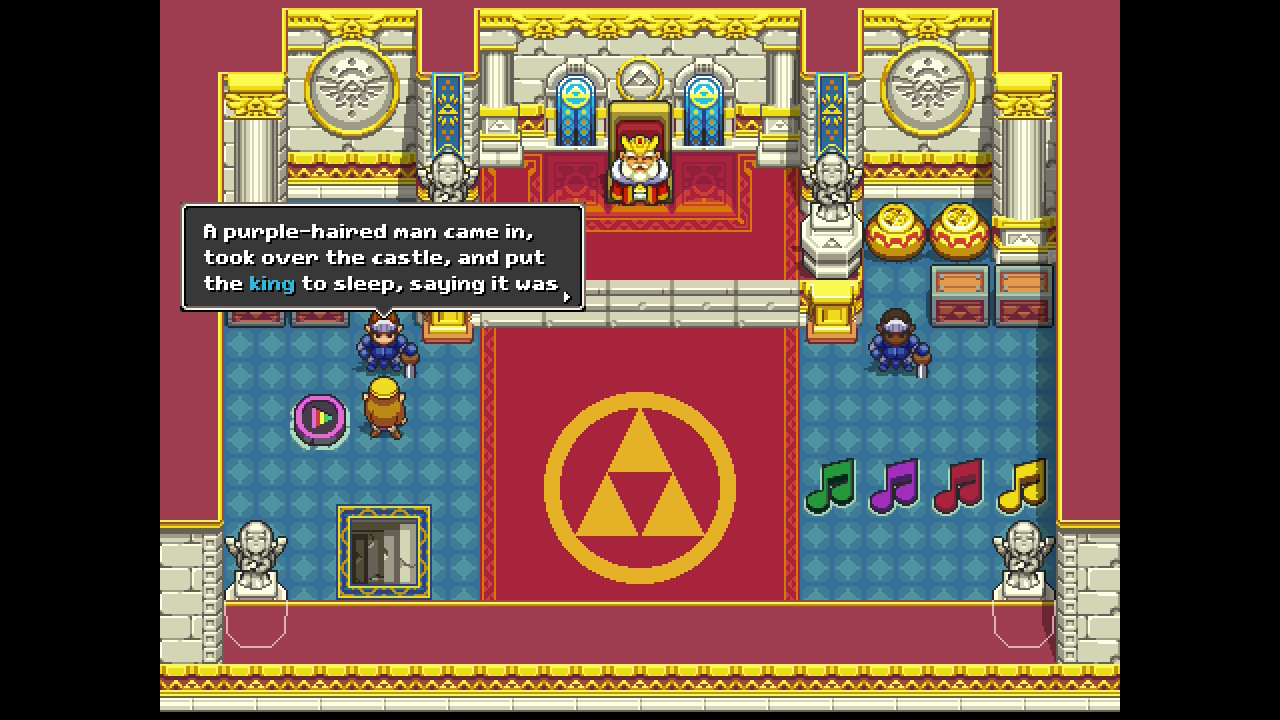 The structure of Cadence of Hyrule is heavily inspired by Zelda: A Link To The Past, with some of Crypt of the Necrodancer’s procedural-generation ideas peppered in. As either Zelda or Link, you must explore the far corners of Hyrule to find dungeons housing Octavo’s champions – monstrous, musical beasts akin to classic Zelda dungeon bosses. These dungeons are found in familiar locales such as The Lost Woods and Gerudo Desert, however at the start of each new game the positions and ordering of these locales are procedurally generated so that every player will have a unique experience. The individual puzzles will be the same for everyone, but where these puzzles show up in your game world will be unique to your save file. 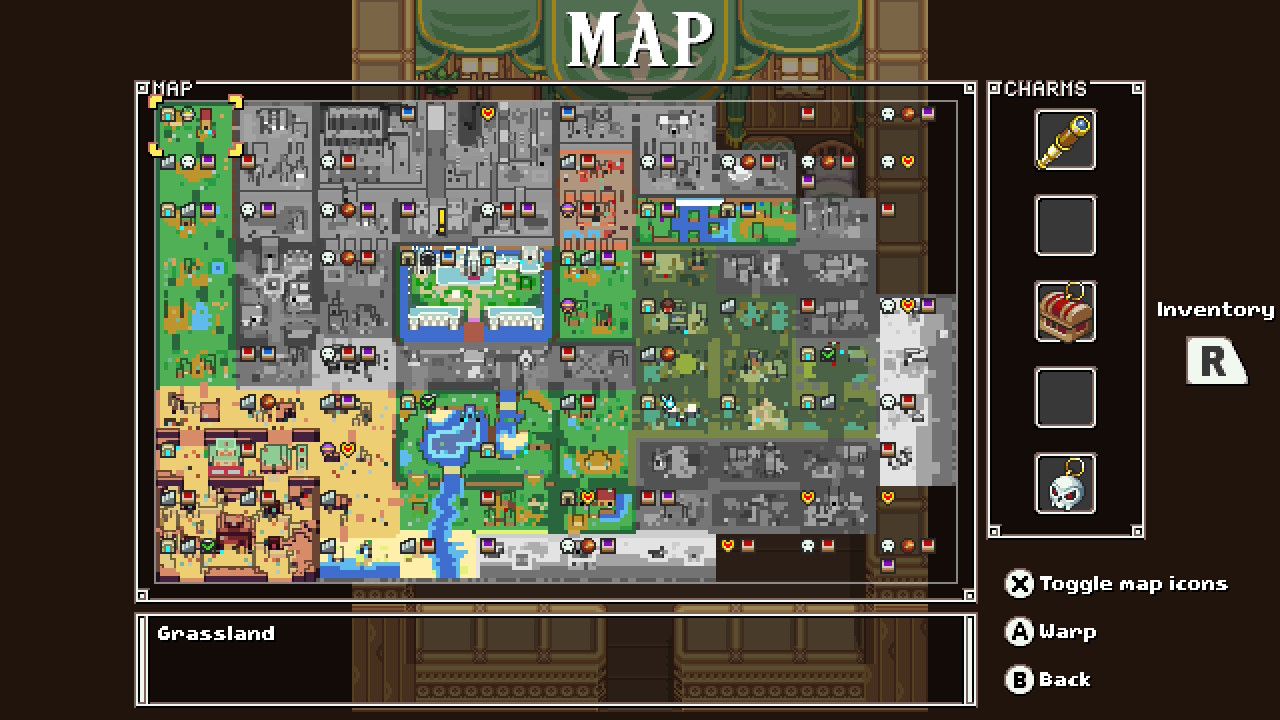 The dungeons themselves are also fully procedurally generated to a template. The entrance and boss rooms will be the same for everyone, however the floors connecting these rooms consist of unique, procedurally generated combat encounters that refresh each time you enter the dungeon. Unfortunately there isn’t much puzzle-solving to be had in these dungeons unlike a traditional Zelda game, yet I still found the unique dungeon templates to offer some fun and engaging combat encounters all the same. 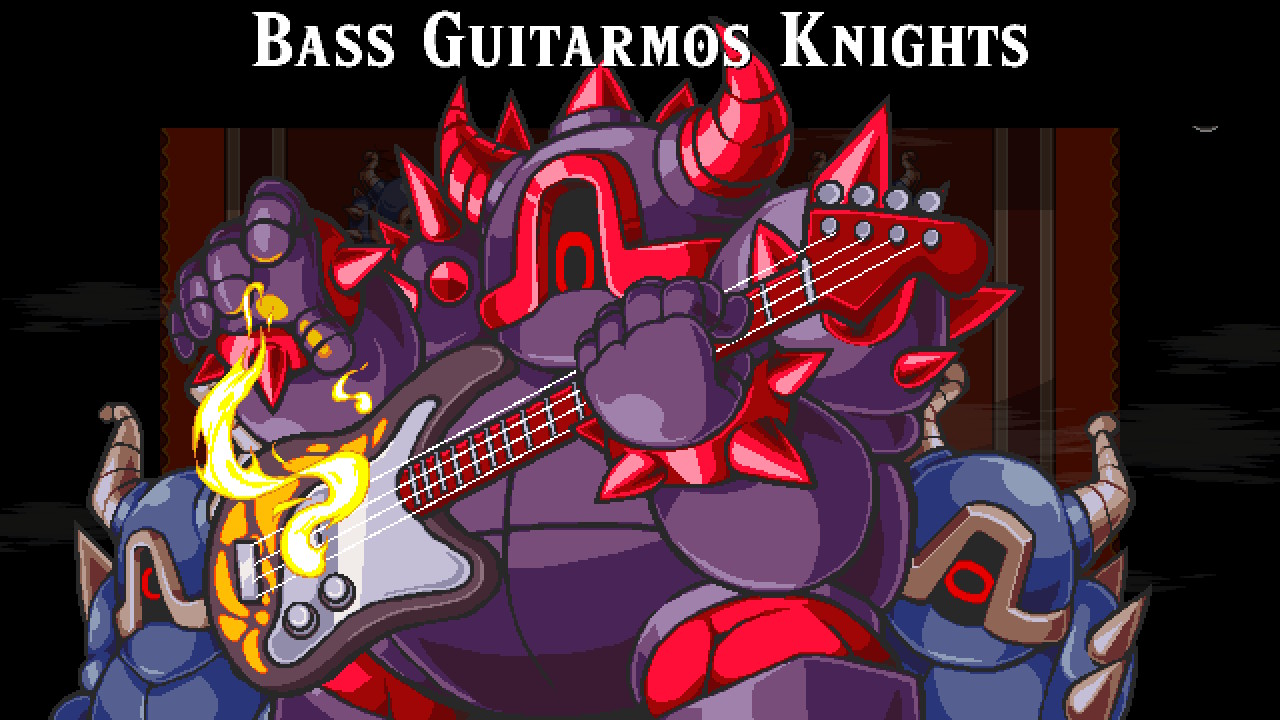 To reach these dungeons in Cadence of Hyrule, you’ll need to solve puzzles, defeat hordes of enemies in rhythmic combat and of course, collect special items to overcome obstacles in your path. The majority of the mainline puzzles are fairly straightforward – most of the time you simply need to defeat all the enemies in a room to progress further. However if you’re looking to track down all the heart pieces and permanent weapon upgrades, best to have a walkthrough handy because some of the puzzles can be menacingly abstract. 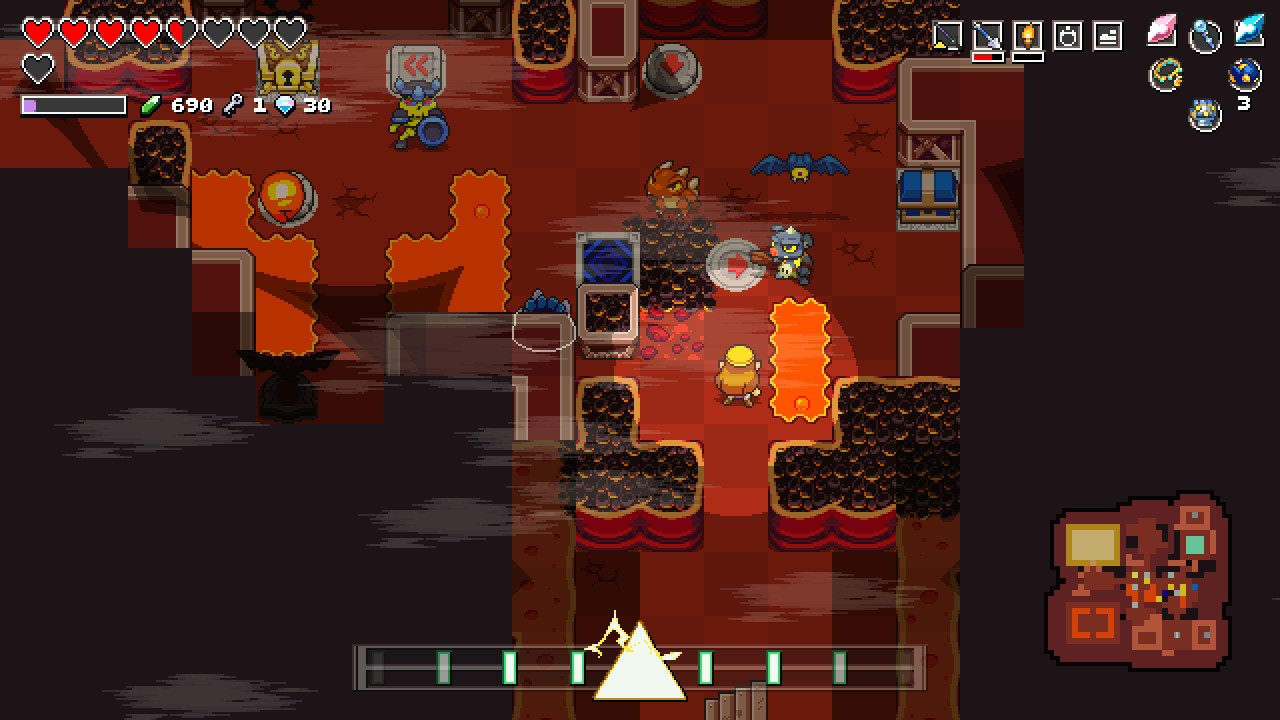 As mentioned before, Cadence of Hyrule utilises Crypt of the Necrodancer’s unique rhythm-based combat system for all of its combat encounters. When you enter a room with enemies, the background music pumps up to 11 and a beat counter will appear at the bottom of the screen to visually indicate the timing of the music. Every action must then be performed to the beat of the song. 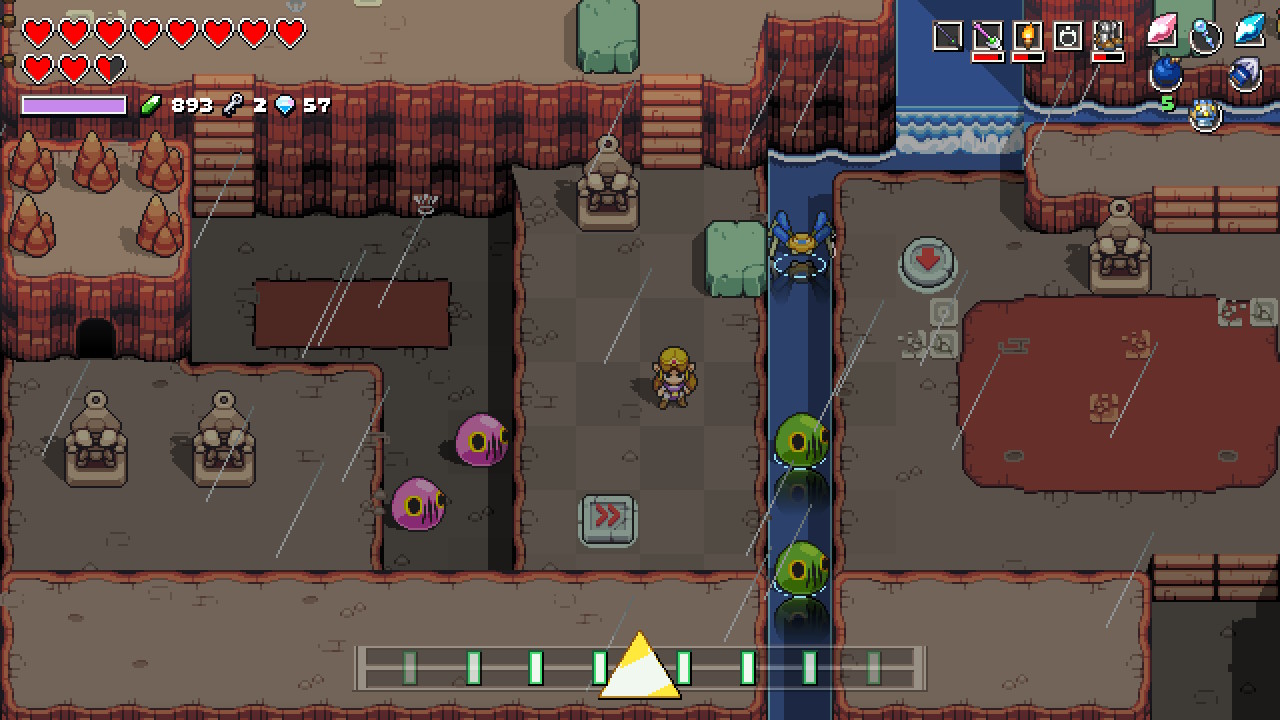 The player can move one square at a time, attack enemies by walking into them or use any item you have equipped to the face buttons – only when the beat hits. If you keep time with the music for long enough, weapon damage may amplify depending on your equipment and you will receive extra rewards for clearing all the enemies. The only punishment for missing a beat is that the multiplier resets back to zero. 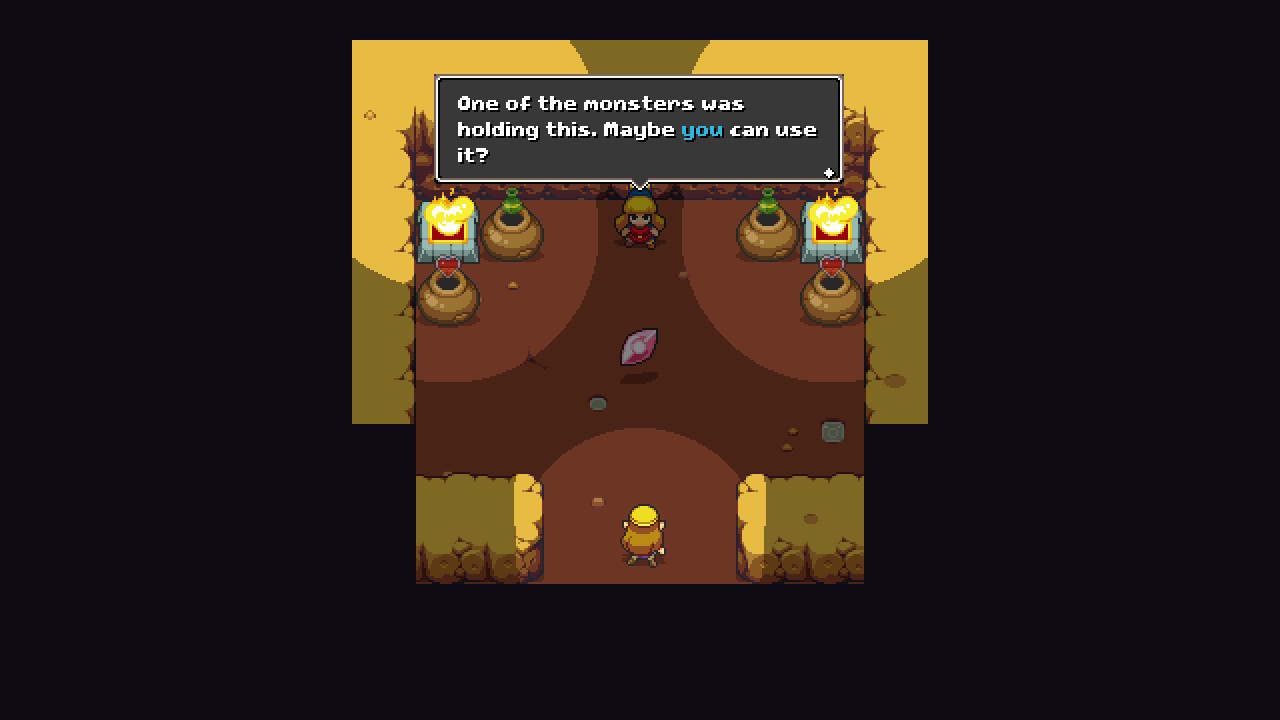 This system of rythym-based combat will be more difficult for some players to grasp than for others. However once everything finally clicks, Cadence of Hyrule becomes a truly unique and fun four-or-so hour experience unlike any other. If the timing element becomes too burdensome, there is also a handy accessibility option to turn off the beat counter and make the game run in a turn-based fashion with enemies only moving when the player performs an action. Or you could connect a second controller and have a friend help out in two-player co-op mode for some multiplayer fun. 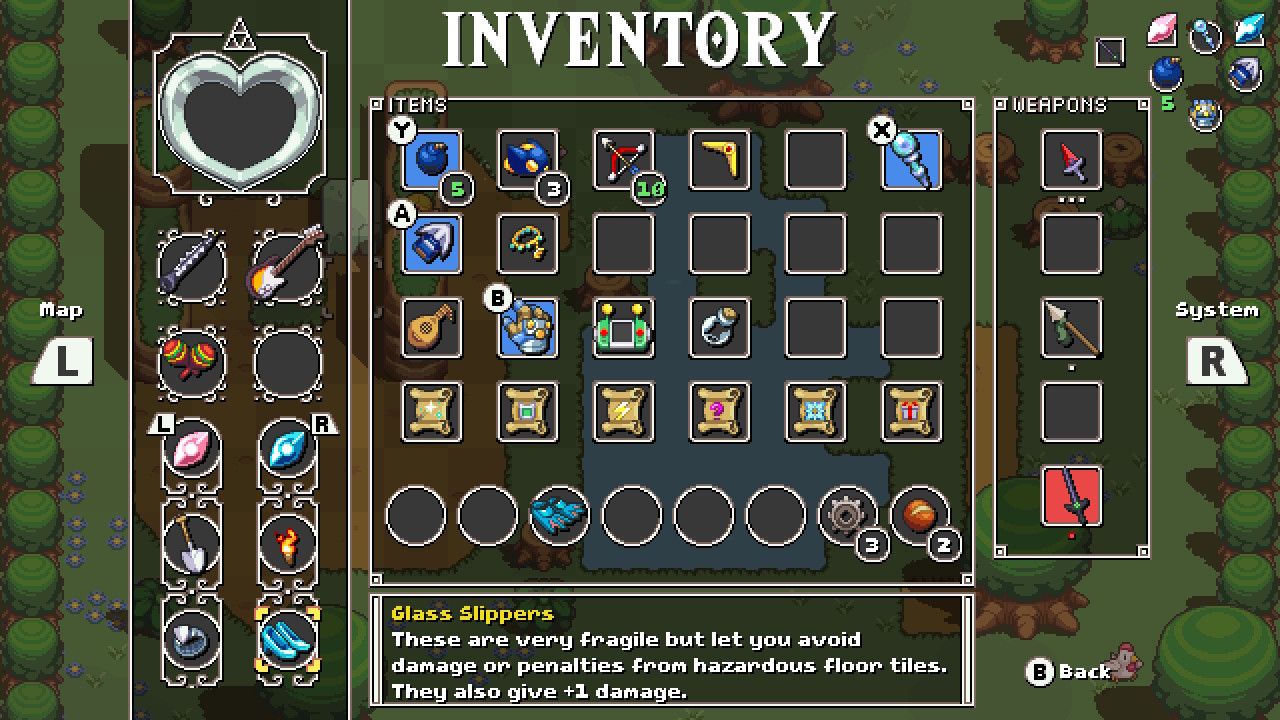 For a game with music as such an integral part of the gameplay, it should come as no surprise that Cadence of Hyrule has a phenomenal soundtrack. A number of classic Zelda tunes have been cherry-picked from the mainline games and remixed to produce bouncing, beat-heavy versions that sound awesome. There’s a nice variety to the musical stylings as well that adds identity to each of the locales and really sets the mood for the intensity of the situation at hand. 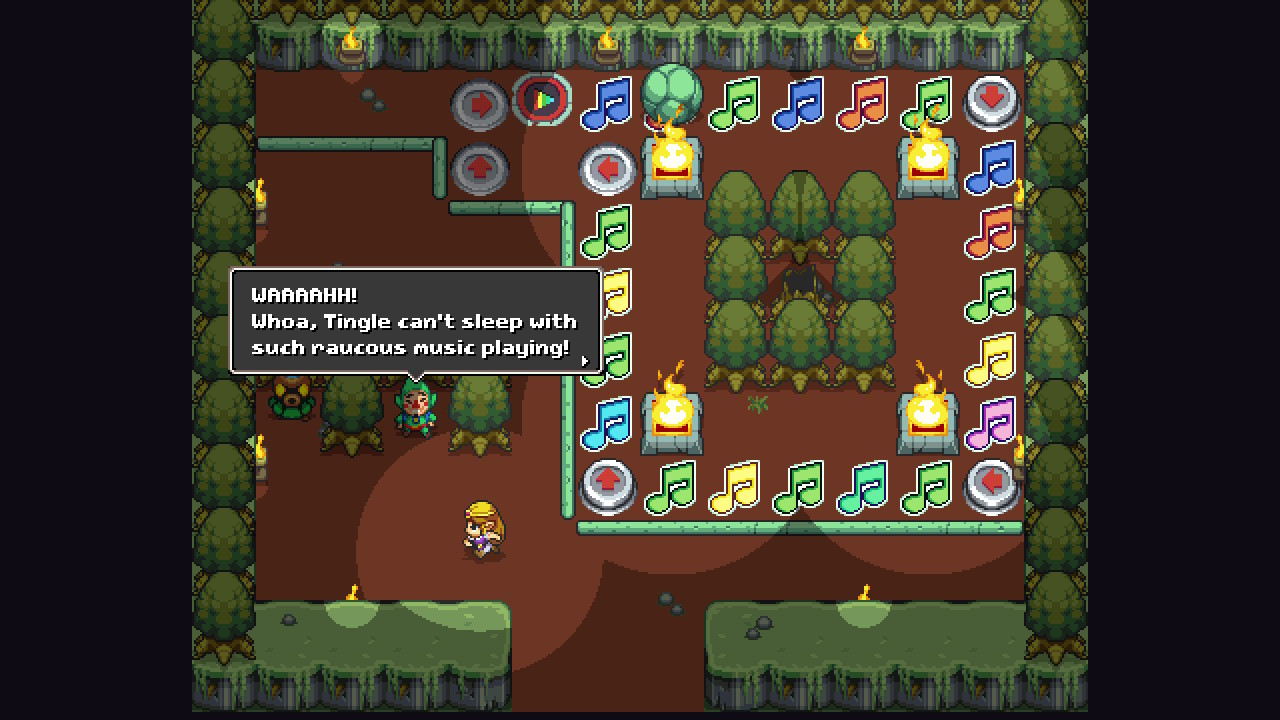 The music also works well to pump up the Zelda nostalgia when paired with the glorious pixel art aesthetic. Cadence of Hyrule is obviously aiming to invoke the look and feel of Zelda: A Link to the Past, but there’s a level of detail to the animation and pixel art designs that transcends the SNES graphics and brings to life the world of Hyrule as it exists only in childhood memories. The visuals are gloriously bright and colourful, making the whole experience a pure joy to play. 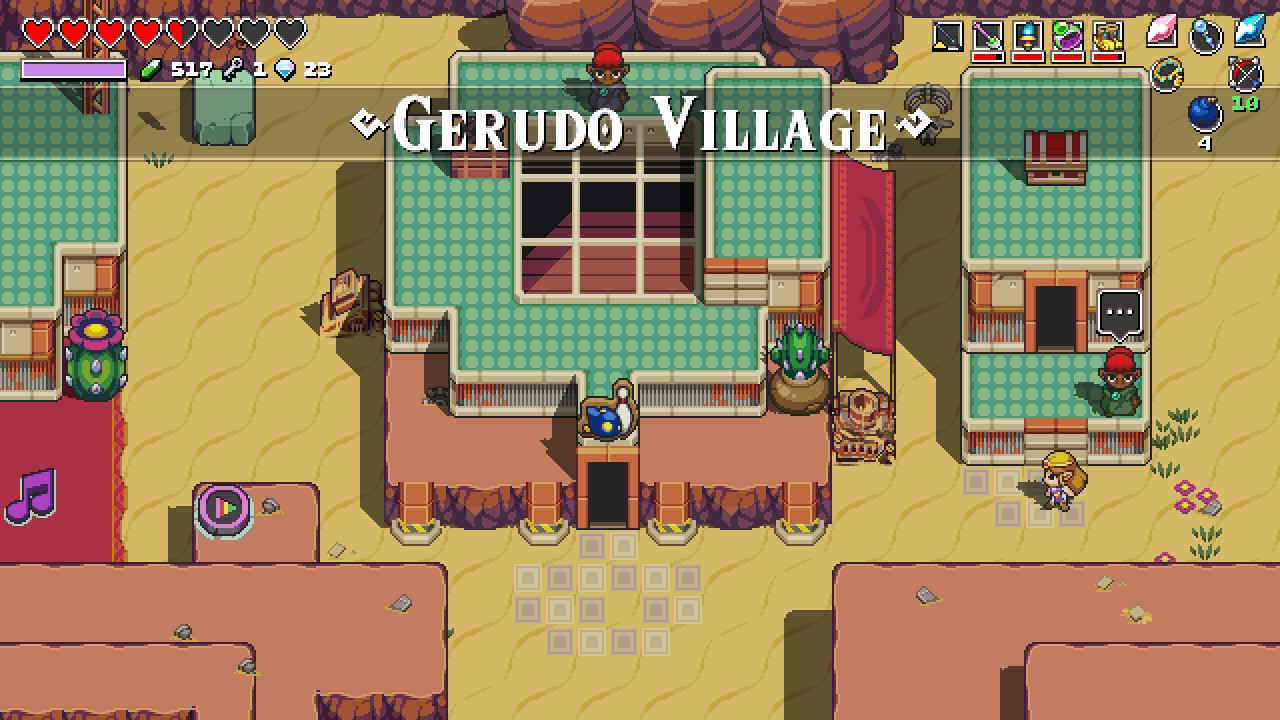 Cadence of Hyrule: Crypt of the Necrodancer featuring The Legend of Zelda is a fascinating game from head to toe. Beginning with its inconceivable conception, the premise alone deserves to be applauded – yet the delivered product is just as impressive. Cadence of Hyrule manages to elegantly combine Crypt of the Necrodancer’s unique rhythm-based combat and procedurally generated level design with The Legend of Zelda’s grandiose open world adventuring to create a remarkably unique experience. The combat may be difficult for some to grasp and the puzzles are a little lacking, but overall Cadence of Hyrule is a fun, compelling adventure that should not be missed. 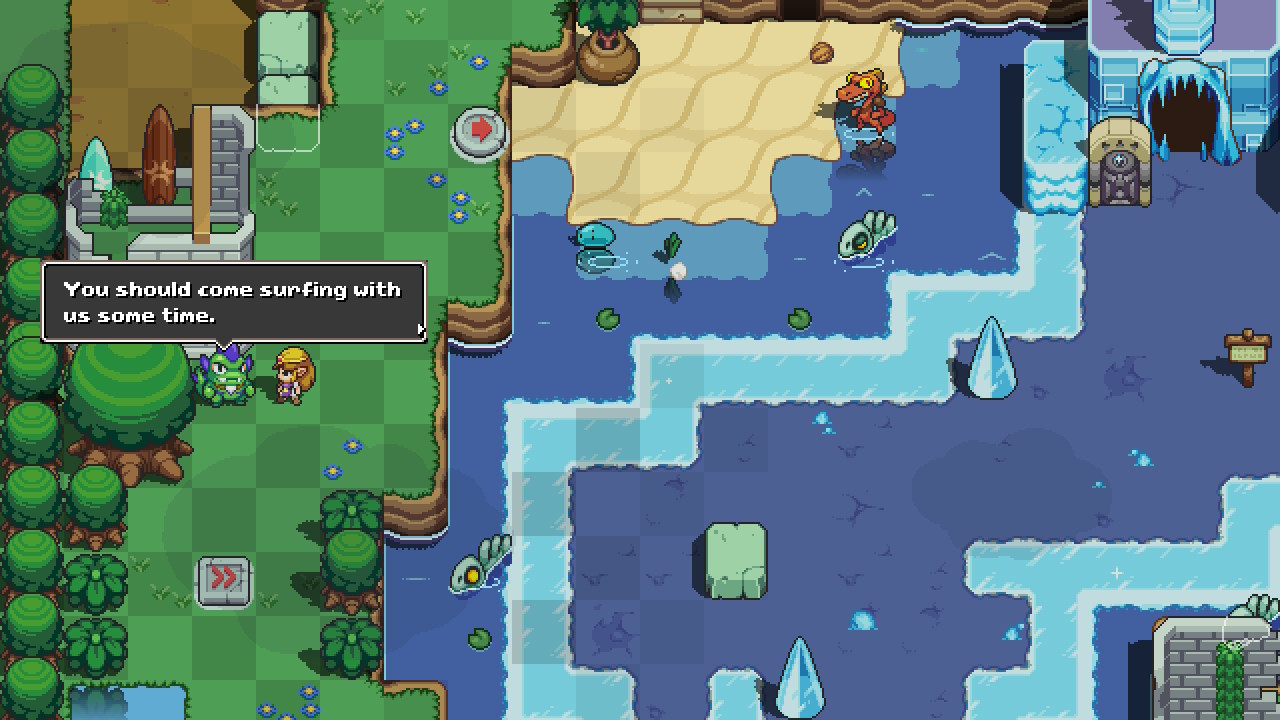 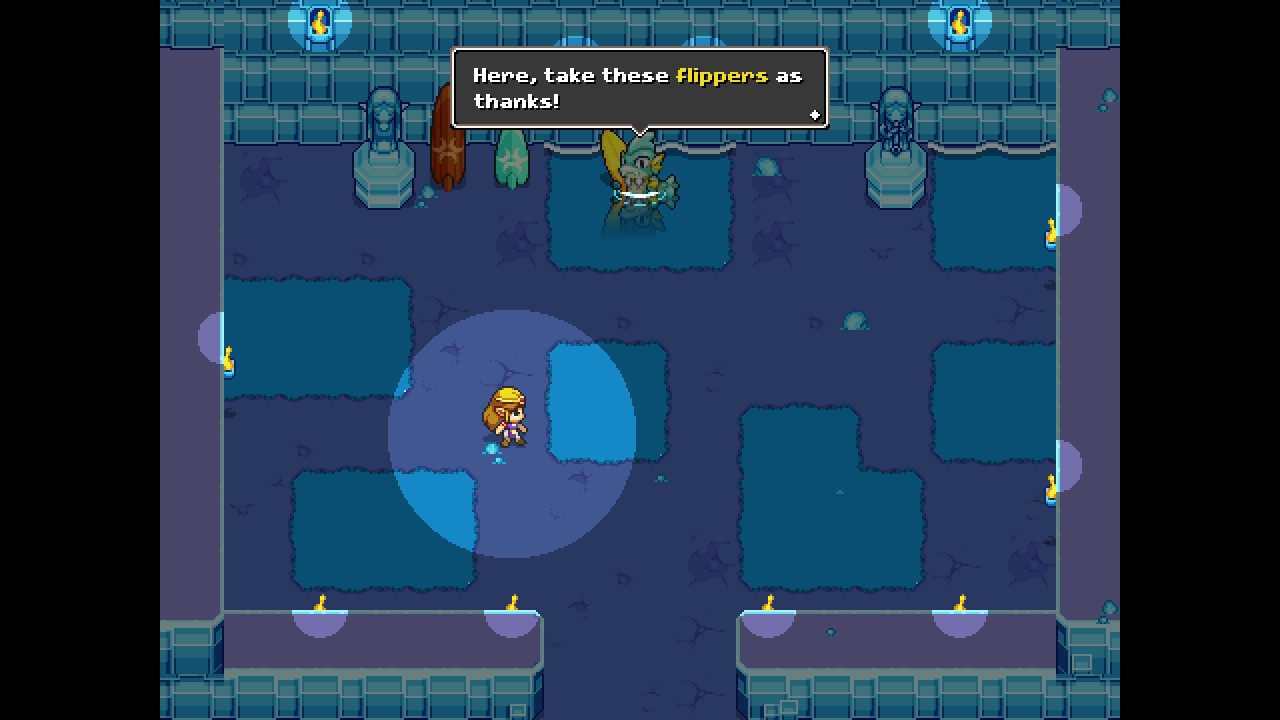