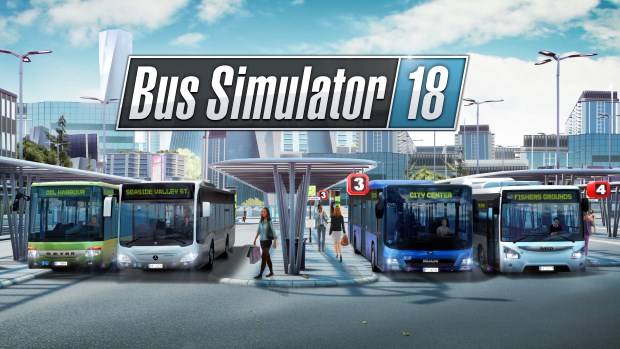 Summary: Hail to the bus driver.

If driving a truck, hauling freight isn’t quite your thing but you’d like to be on the roads… maybe Bus Simulator is more up your alley. Taking a similar mechanic, go from point A to point B and adhere to road rules it’s a similar experience but with a few differences. As a bus driver you aren’t limited to just going from point A to point B… you can run the gamut of the whole alphabet… in fact you’d do well to have more than one bus stop on your route or you won’t make much money at all. 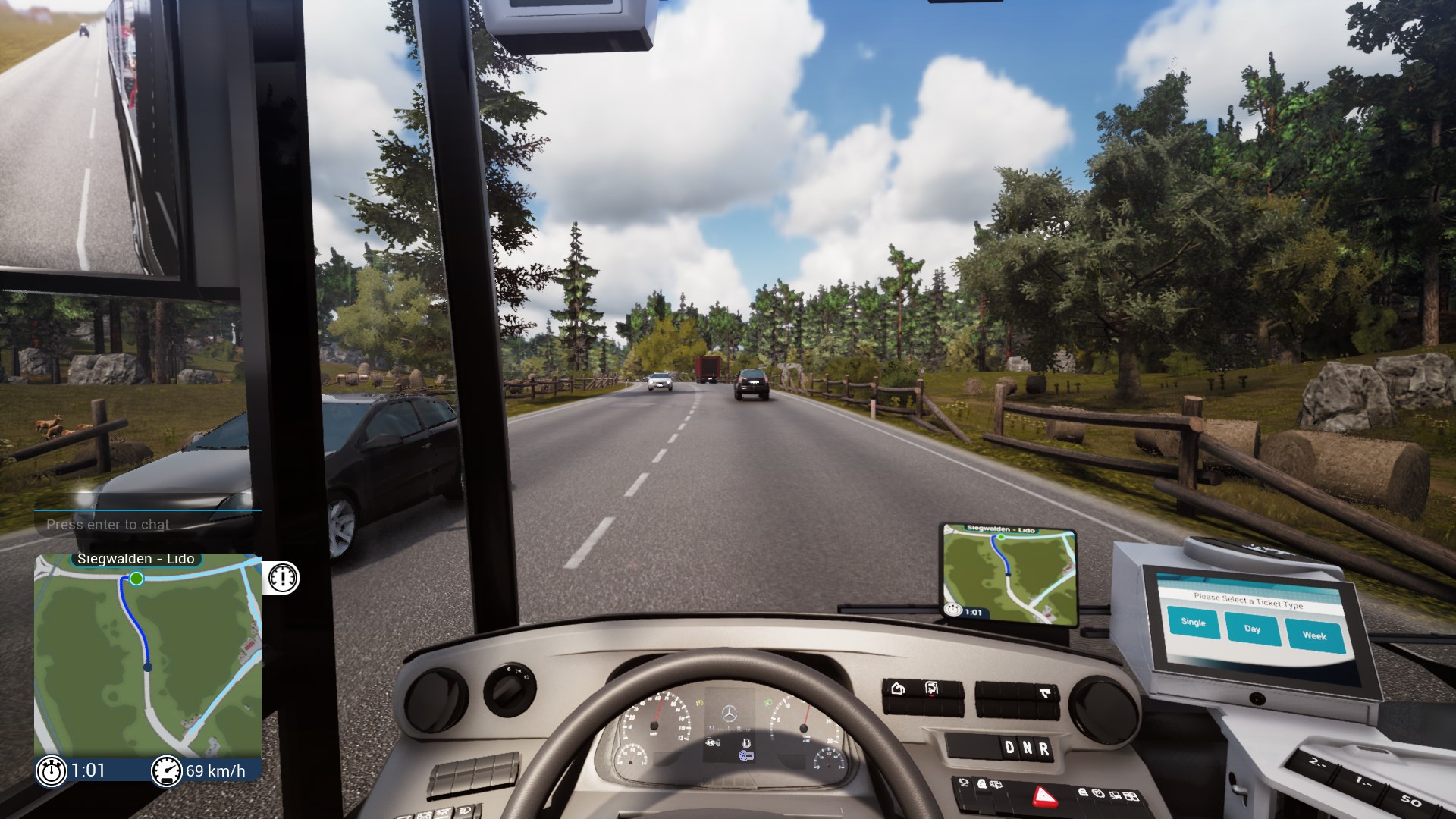 You begin with a single bus and driving a simple route. You are accompanied by Mira Tannhauser who acts as the tutorial for the game, she informs you that you are the first driver hired to revitalize the cities public transport and she guides you through your first bus route and the ins and outs of the job right down to how to start the bus and give change for fares. From here it’s up to you to expand your burgeoning public transport empire. You are offered incentives to create and drive certain routes and perform other goals to expand your empire. As your company grows you are given access to new buses, new superficial enhancements (decoration options for your bus) and new areas to add to your bus routes. 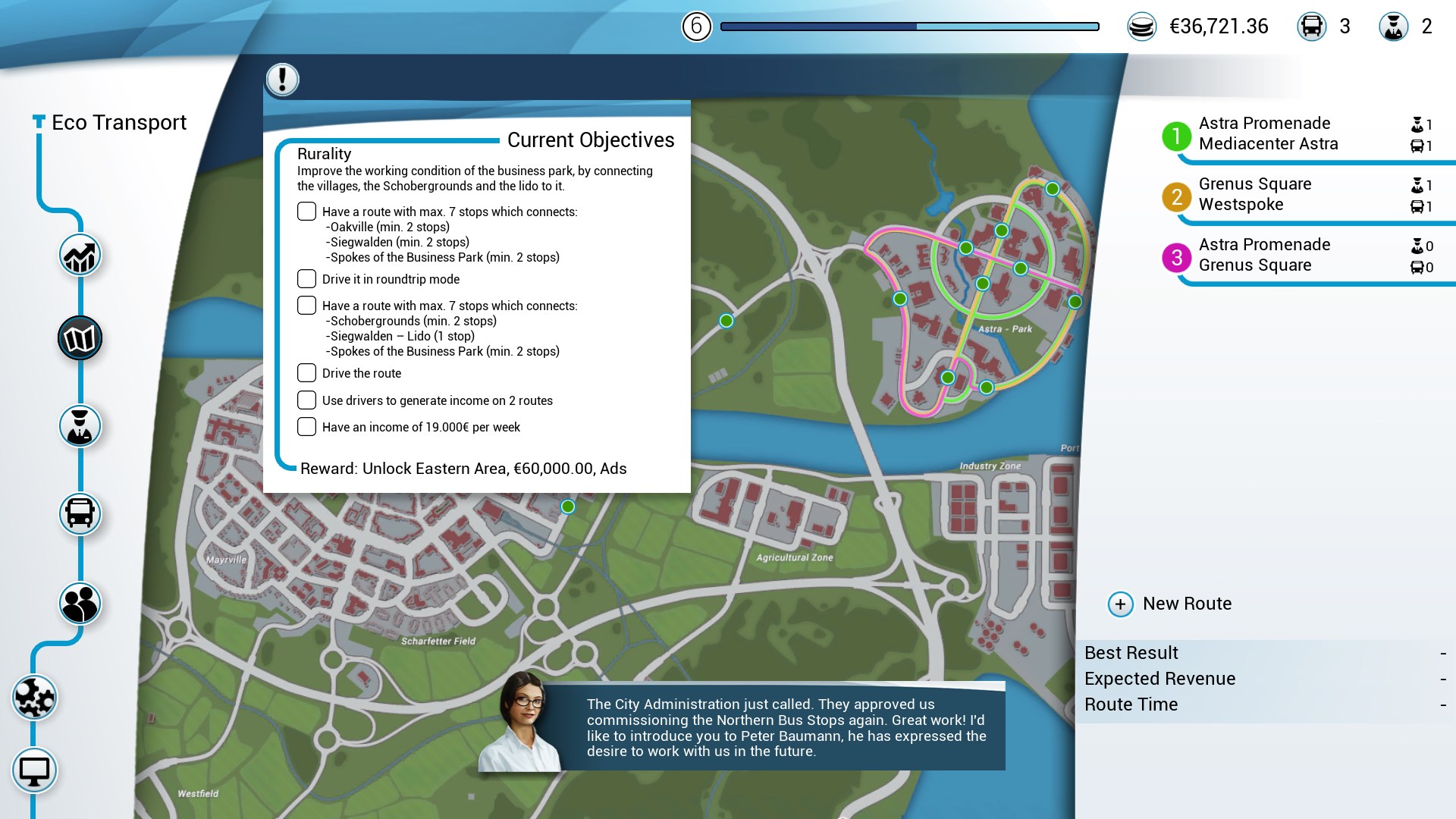 Being full of passengers rather than cargo also gives the game a chance to have some banter between commuters and though it does get repetitive there are some “dad joke” style laughs to be had with some of the conversations. There are some passengers in wheelchairs for whom you will need to lower the ramp to enable them to enter and exit the bus which is a nice little touch of inclusivity. But not all passengers are nice… some will leave litter on your bus and others will try and ride without a valid ticket. You can get out of your seat at stops and asked to see people’s tickets but I haven’t noticed any way to discern if someone hasn’t paid for a ticket as they are hopping on the bus so, unless I’m missing something, it’s pretty hit and miss as to whether you are going to find a fare evader… doing so does net you a bit of extra money by way of a fine so it can be worth it. 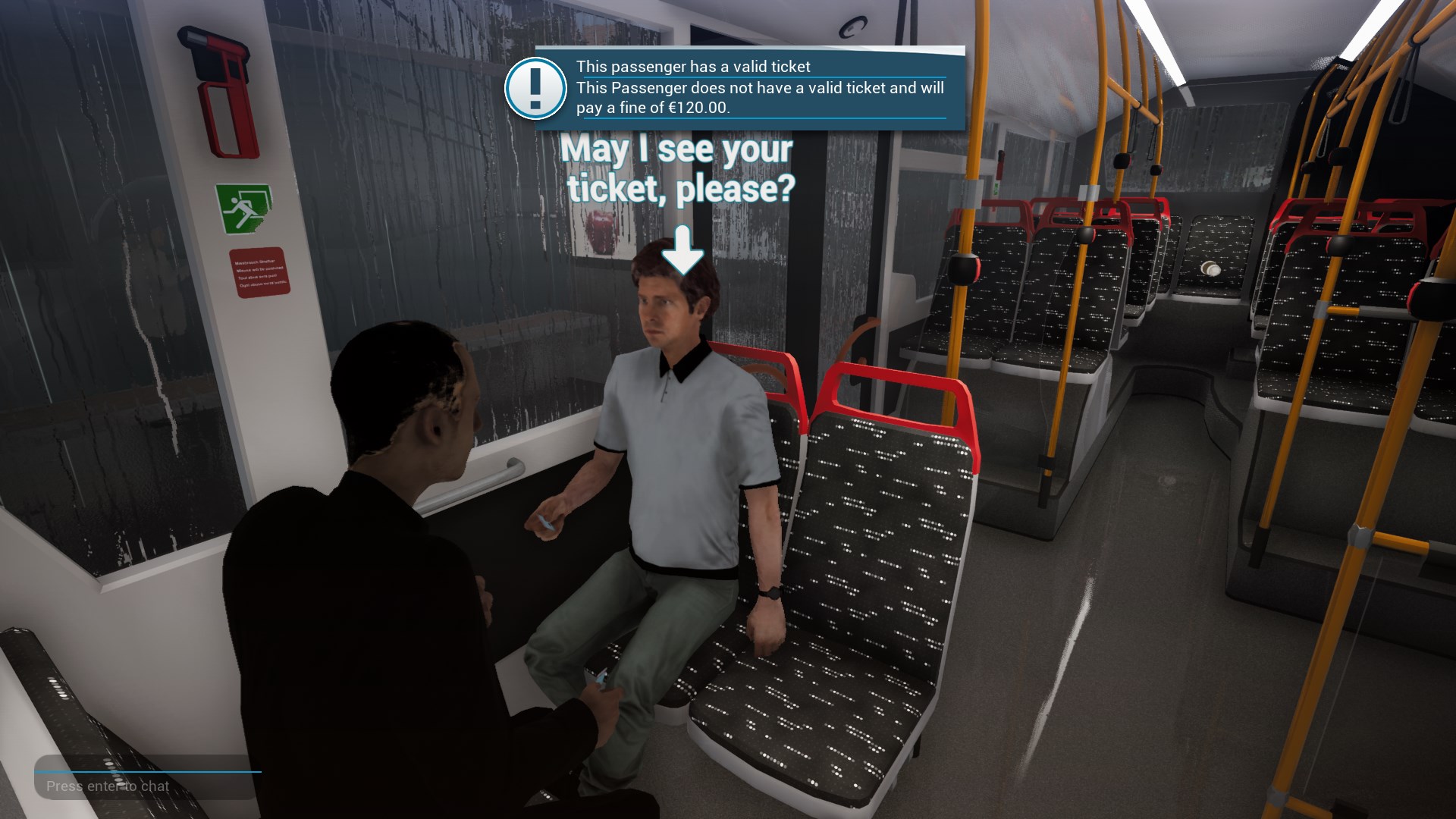 Progression is achieved a few ways, there is the simple driving of the routes. Creating new routes and hiring other drivers and buying other buses for them to drive (which as you would expect also enables them to level up). Every time you personally drive a bus you can be awarded experience by doing the right things… even down to making sure you indicate at the right time for leaving or entering a bus stop… for clearing a bus stop of a car stopped in your zone… indicating for turning etc. By the same token you can also be penalized for not doing the right thing… drive over a pot hole or speed bump too fast and you will receive negative feedback… run through red lights or driving into things… also not a good idea. I also found out that if you accidentally hit a pedestrian it can cost you $20,000… I don’t know if the amount varies because I don’t plan on hitting anyone else… I didn’t even realise I’d hit the first person until after I’d finished the route and it told me about the penalty… I believe it occurred at a zebra crossing, they most likely stepped out as I was going through… the screen flashed red and seemed to reset… so less traumatic than it could have been… but certainly a shock. 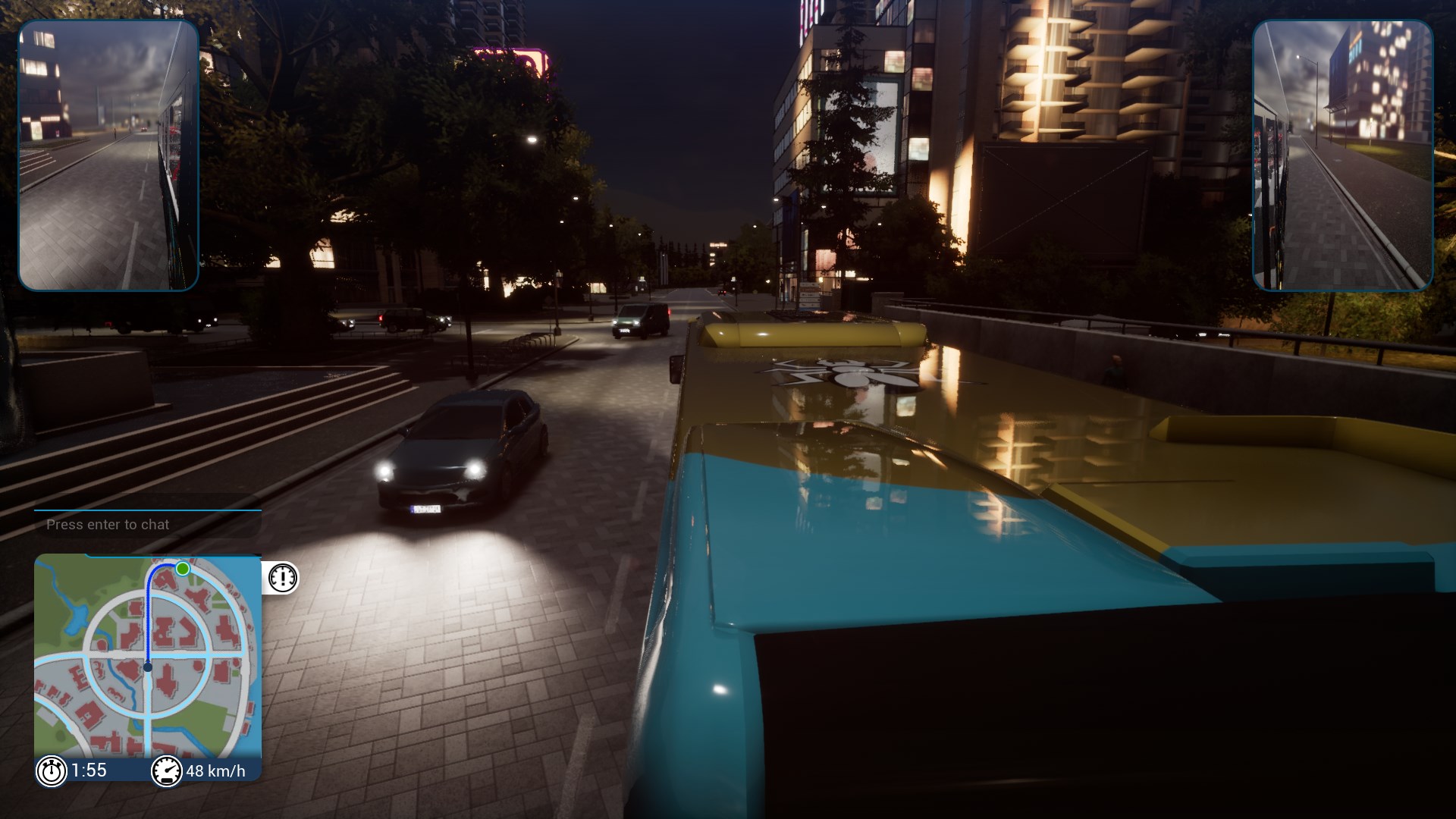 Visually the game initially struck me as pretty low quality… but after a visit to the settings menu I found out it was because it did not default to maximum settings and doing so manually totally changed the visual experience. Some elements are a little basic… but when you get a rainy day there are some really striking scenes to be had. 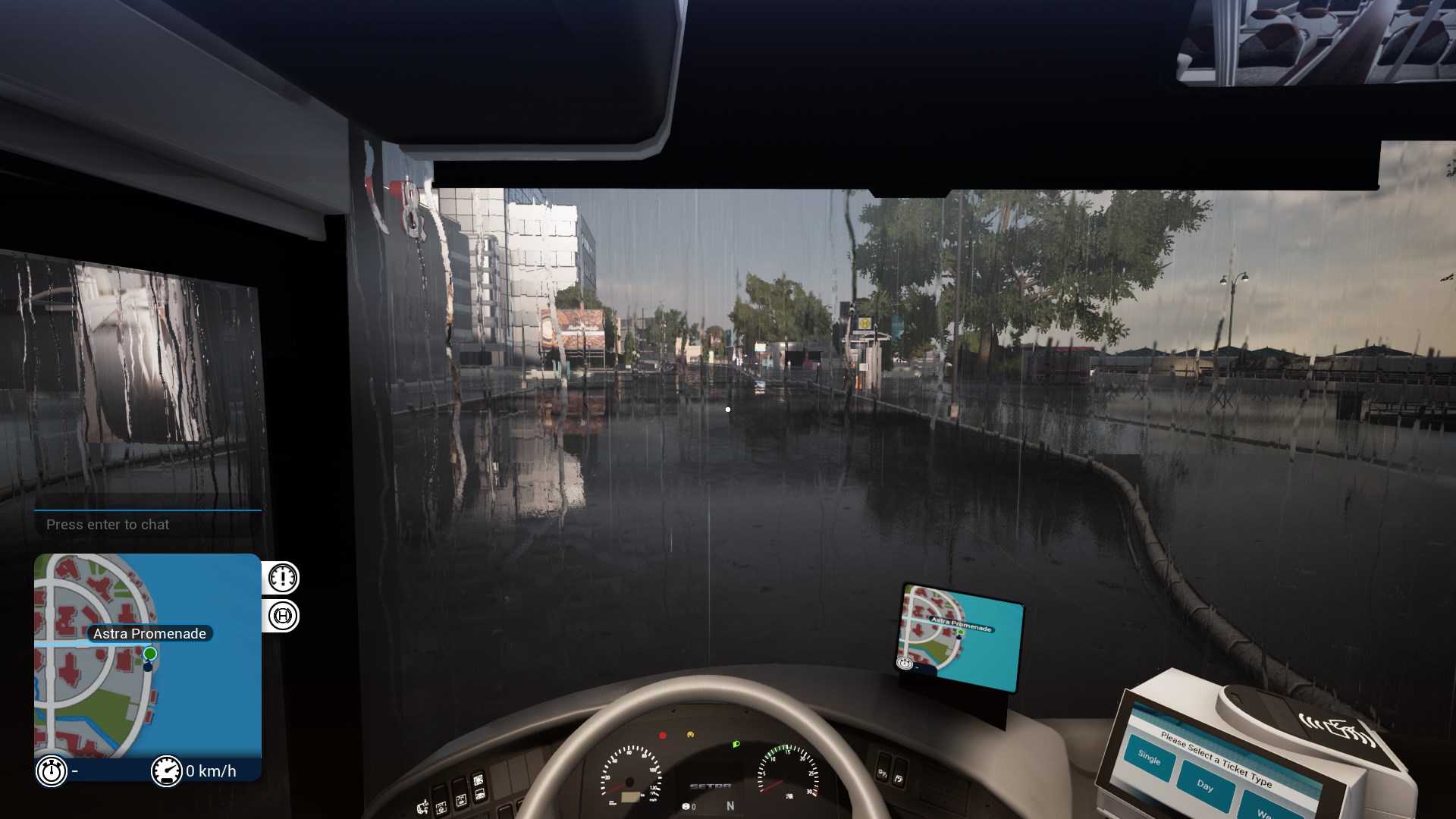 It’s hard not to liken this to the other simulator games such as Euro Truck Simulator and that’s not a bad thing. It does the same thing they do which is give you a few tasks to perform… nothing too tricky… but enough to mean you have to stay engaged. It’s a somewhat relaxing gaming experience and works well as a drop in drop out play style game. There’s not a lot to it but what there is can be a pleasant distraction from every day life for a while… even if it does simulate a form of every day life for some people. If you like simulation style games you will most likely find enjoyment in this one… if not then this might be worth giving a miss. For me it was another nice easy going title to add to my collection… now if you don’t mind I’m going to switch the radio to easy listening and raise the ramp and head off.