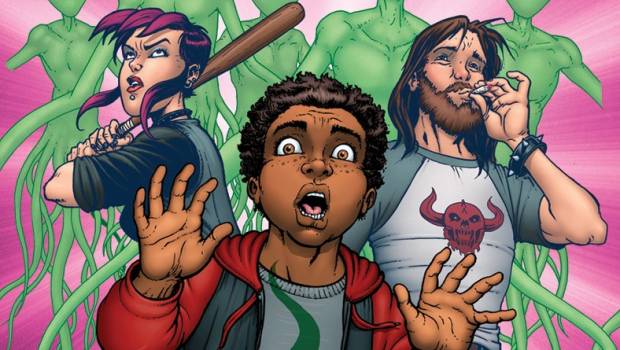 Summary: Get high to save the world!

Writer Dennis Culver and artist Geoffo join forces to bring a new ongoing series from Image Comics called Burnout. A group of angsty and troubled teens spend their time fighting aliens and saving the world. The only catch is that they must be high to see them!

The story follows Andy, an awkward teen who dreams of partying hard, getting high and having fun. The chance arrives when a fellow classmate throws an adult-free party at his house, inviting the entire school to get up to all sorts of shenanigans, and revelling debauchery. Unfortunately, Andy’s parents aren’t all that keen on him going, and of course say no the idea…bummer.

However, Andy has other plans and being a teen with a determination to party, sneaks out the door, making a beeline for the boozy and drug-infused merrymaking. Once there, he gets down to business and enjoys his first choof on a spliff in spluttering glory. Stoned and squinty-eyed, he immediately notices something strange; the tall lurking presence of a bright green alien, who just so happens to invade the body of the girl sitting next to him. Andy then quickly notices that nearly everyone at the party has glowing green eyes and is unaware that they are playing host to an alien body invader. That is, except for the school Burnouts, who make it their business to kill every alien they can get their hands on. With the ability to see the aliens, the invitation to join their gang is extended to Andy…the only catch being that he must be wasted to see the invaders.

I just love this concept and believe that it has been wonderfully executed by Dennis Culver. It’s funny, light-hearted and compelling as well. The story doesn’t take itself too seriously, allowing for many entertaining and somewhat uncanny things to unfold. First of all, I can relate to young Andy and his desire to be out there, taking advantage of his youth and having the time of his life. I was the same as a teen, awkward, bumbling and desperate to go out there and live my best life. Going to your first house party is a rite of passage, we’ve all been there, and I’m sure everyone can reflect the wild partying that naturally ensued…or perhaps not. I guess it depends how much fun you had. Andy is a fish out of water, clearly a newb and awash in a miasma of awkwardness and unease. I really thought that Culver perfectly captures the gawky, yet keen as mustard attitude of Andy during these moments. Then comes the wonderful twist, where we learn that Andy has the rare ability to see aliens when he is high. This revelation suddenly changes the dynamic of the story in a hilarious and wild way, as the dialogue bounces around with the sharp and funny banter of these characters. Things from this point on are chaotic and fast-paced, as we see him swept up in the raucous fighting of the Burnouts. Hilarious!

The art by Geoffo is wonderfully animated and full of energy. His art has a cartoon quality to it, which perfectly captures the lightheartedness of the narrative. I like the angular blockiness of his art, and this coupled with the heavy inking and thick linework makes for a lovely graphic and striking quality. The scenes involving the aliens are fun, and I especially love the sense of movement that we get to see during the fight sequences. Seeing the punk chick, Jackie, swing a baseball bat with a livid look on her face is a treat. The colouring works well alongside the art, changing to match the changing tonal shifts. The palette also helps achieve a convincing sense of light, which is really noticeable during the darker scenes where things have an ambient glow.

Overall, I thought that this was a great start to this series. It was fun and fresh, and I totally love the concept and characters. The art is ace and has a lovely sense of energy, that matches the pacing of the narrative. I recommend giving this series a go. It’s a lot of fun. 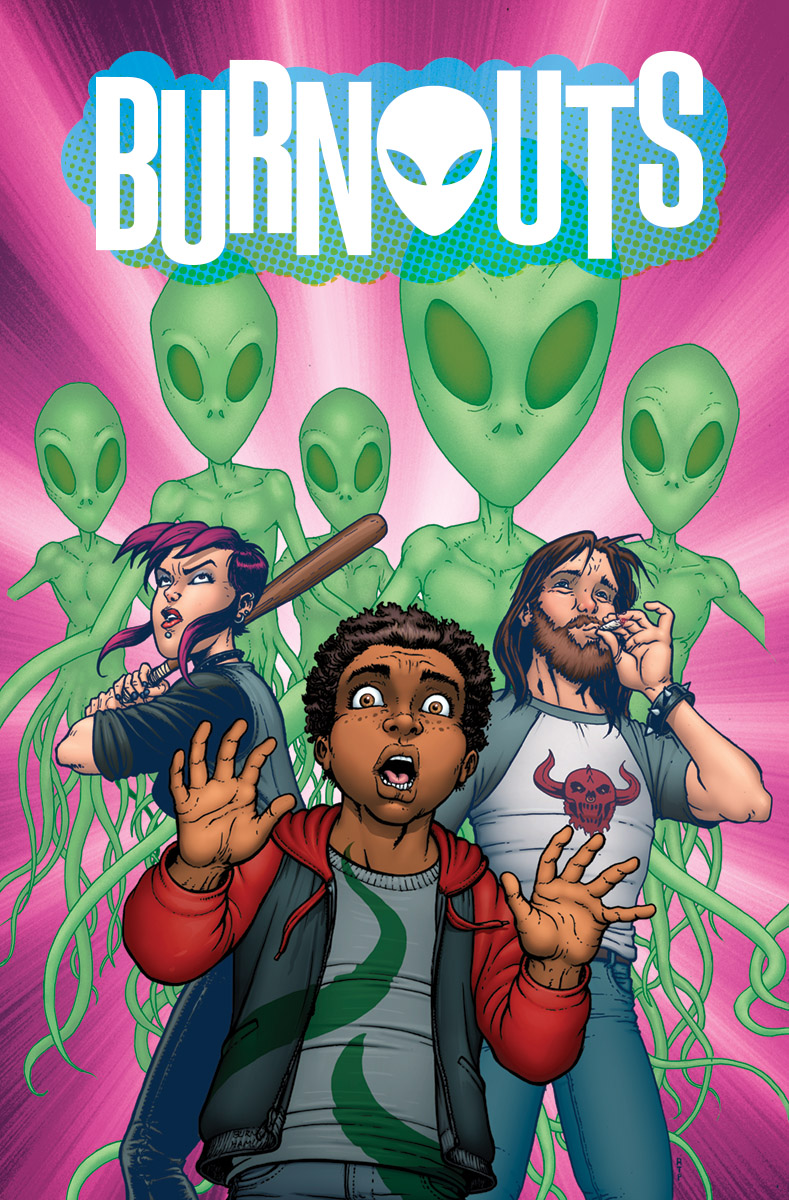