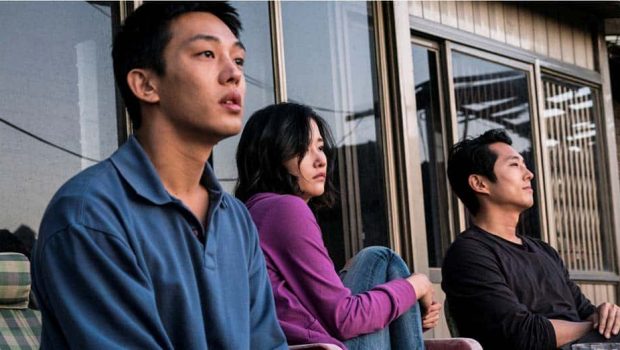 The title of Chang-dong Lee’s accomplished social drama, Burning, has several meanings. It infers a burning passion for love and acceptance, the burning for personal ambition, the burning sensation of jealousy, and the physical burning of matter. Each variation is typical of the thematic goals of this challenging South Korean film, which is based on a short story by Haruki Murakami. It is less of a crime drama than a subtle character study entrenched in philosophical questions about life’s fragile existence.

Burning draws symmetry between the thoughts of its protagonist and the mystery genre, before reaching a powerful conclusion that reshapes what we have seen. Many films today resort to characters and dialogue stuck on autopilot and offer no ambiguity or complexity. With Burning, we feel compelled to retrace actions and small lines of dialogue to determine the motives of the characters. By revisiting scenes and recalling fragments of the plot, we can create patterns that resolve our need or burn to understand the drama.

The story is about a young man named Lee Jongsu (Ah-in Yoo). He is a writer but an unsuccessful one. On the backdrop of the country’s high unemployment, his degree is useless and he is now working as a delivery man. His father, a war veteran, is in court for assaulting someone. We learn that Jongsu’s mother and sister have left the father for having an anger problem. It is also suggested that he was unsuccessful as a farmer and unpopular with the other villagers.

Jongsu’s personal life is further complicated by the emergence of Shin Hae-mi (debut actress Jong-seo Jun). Jongsu barely recognises her, but she insists that they grew up together in the country. Many people have moved away from the village and into the city to pursue new lives. Her ambition is to become an actress and people comment on her ability to tell stories, such as the time she fell down a well. 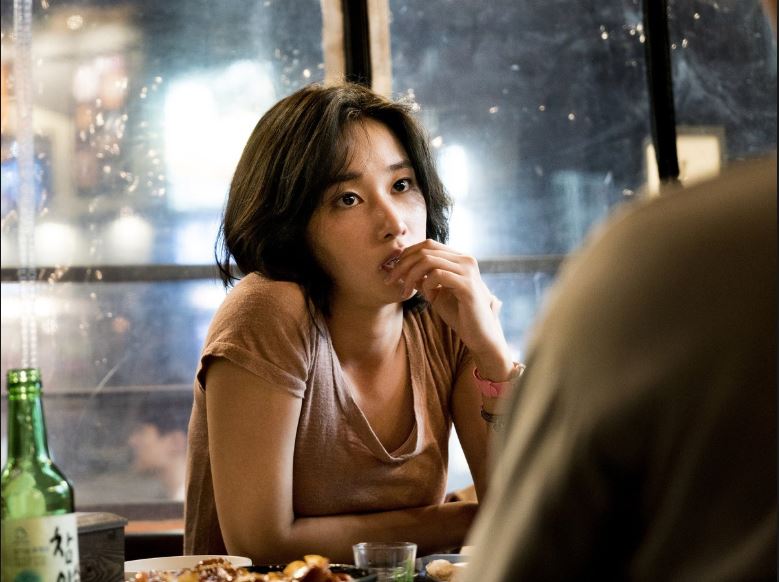 Jongsu and Hae-mi casually sleep together, and his awkwardness suggests it is his first time. When they share a meal, she talks about magic, mime artistry and discusses ‘the great hunger’. The latter is a reference to the charity work she undertakes in Kenya. However, she soon returns from a trip due to a terror warning. Jongsu meets her at the airport where she is accompanied by a fellow named Ben (The Walking Dead’s Steven Yeun). Ben, wealthy, sophisticated and affable, holds Hae-mi’s attention but Jongsu is sceptical.

Burning strikes an unforgettable balance between ambiguity and humanity. The characters are undeniably cryptic, particularly Hae-mi’s ruminations about ‘the great hunger’. Our interpretation of this theory suggests she is seeking the knowledge of life, such as why people are relegated to certain fates. For example, there is a strange scene on Jongsu’s farm where the three characters smoke weed together. Hae-mi then dances in the sunlight with her arms stretched out towards the North Korean border.

Filmed in a shadow, the dance and her body language are intoxicating as she reaches for the light. It lies before her in the form of a fading sunset. Yet after an unbroken long take she starts to cry. She realises that her existence will never be completely transparent. The moment recalls several other allusions in the dialogue made to Hae-mi and smoke. The comparison reflects the idea that our ambitions and desires are like the faint glimpses of light that slip away from us as each new day ends.

Failed ambitions are personified by the intense jealousy Jongsu feels towards Ben’s lifestyle. The film explores this complex emotion through classic and contemporary cultural staples, including F. Scott’s Fitzgerald’s novel The Great Gatsby (1925). Fitzgerald dramatised the struggle of outsiders to successfully integrate into higher social classes. When Jongsu talks about Ben he says, ‘there are a lot of Gatsbys in South Korea’. Jay Gatsby was deemed fraudulent for earning his fortune through bootlegging, and because of his jealousy Jongsu assumes Ben’s wealth is illegitimate. Similarly, Hae-mi’s great hunger dance echoes the green light of Fitzgerald’s work, which symbolised the elusiveness of dreams. A contemporary allusion to wealthy impostors is found in a humorous gag shot. Jongsu is framed using the toilet while simultaneously Donald Trump is speaking on the television set.

The director Lee creates visual binaries to highlight Jongsu’s social dislocation. He deems himself a failure because he is lonely, unsuccessful and dreams of reaching the high life. Lee juxtaposes Jongsu’s dirty old farm truck with Ben’s attractive black Porsche to show the separation of their lifestyles. Ben also lives in a luxurious apartment and sits in trendy cafes reading William Faulkner. His apartment is filmed from wide angles to symbolise the opportunities of his privileged lifestyle. It contrasts with the narrow space of Hae-mi’s impoverished room. At one point, Jongsu looks out of Hae-mi’s window and the camera retracts to a long shot of the city. It paints him as a prisoner of his profession and his failings. Additionally, an unbroken tracking shot pursues him as he walks down the busy street. It shows the rigidity of his work routine as a deliveryman, whereas Ben’s profession is never explained.

Burning also dramatises a psychological conflict between sex and ambition. Before they sleep together, Hae-mi tells Jongsu that sunlight from the window is rare. Jongsu prefers to look at the light and a shadow rather than her face. There is also a repeated image of him masturbating while facing a city tower outside the open window. These images bizarrely suggest Jongsu is loveless and values ambition more than intimacy. His obsession later on is less about Hae-mi’s welfare than a plight to unmask Ben as an impostor, undeserving of his lifestyle. Jongsu’s actions stem from his desire to escape his framing roots since he is a failure and his father is mad and dangerous. 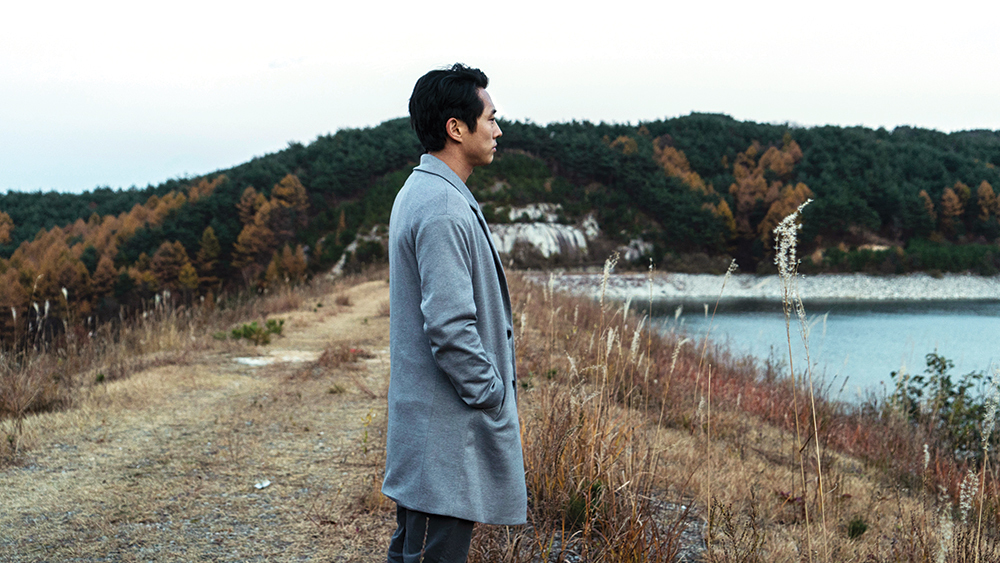 A crucial turning point in Burning’s story sees ambition and jealousy culminate into a pursuit where Jongsu is determined to unmask Ben. The hunt is cryptic and suspenseful because Ben is completely ambiguous. He says his hobby is burning down burning greenhouses. In another scene, Jongsu asks him what he does for a living and he replies, ‘I play’. The mystery fuels Jongsu’s envy as to how someone slightly older than him is so successful. Ben is wealthy, cultured, and has solid family relations. He is what Jongsu would like to be but how he arrived there is unexplained. Is he genuinely sinister or more vulnerable than Jongsu realises? Ben’s dialogue about never crying and then being jealous thoroughly adds dimensions to his character and his actions.

The film’s length and leisurely pacing immerse us into a sense of place and the intensity of the performances. It is highly gripping when simple details of the characters’ everyday lives become pivotal clues, including the name of a cat. Meanwhile, the actors are excellent and realise their roles with great humanity. Jongsu is perfectly played by Ah-in Yoo with naturalism as an awkward loner whose body language amplifies his self-defeating nature and lack of confidence. Jong-seo Jun is charismatic as the charming and ambiguous Hae-mi, and Steven Yeun is subtle and unnerving while playing Ben. His mannerisms, including the way he crosses his legs or smiles politely, create a thick air of mystery around his enigmatic character. 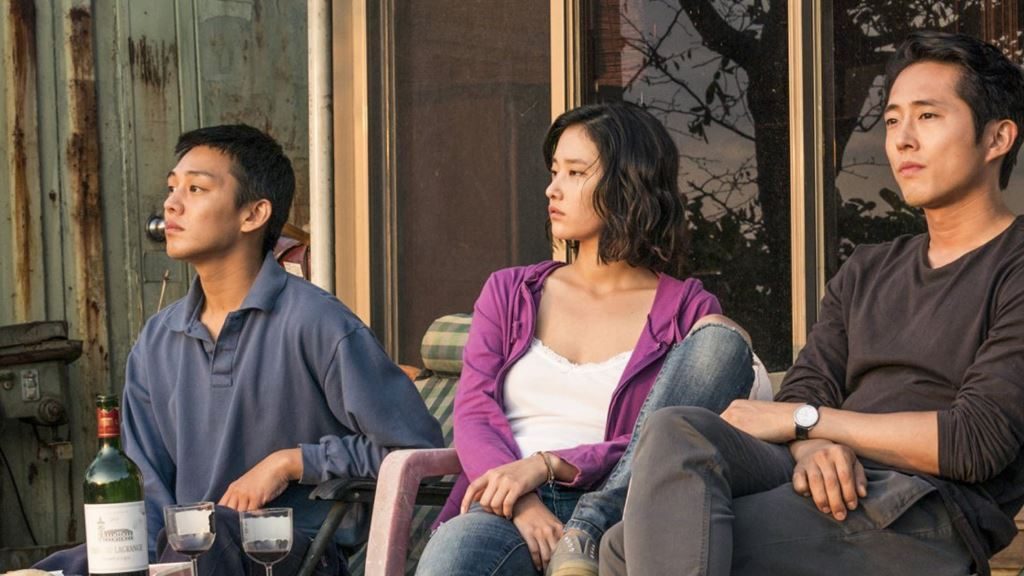 The story concludes with a powerful and confronting ending that will divide people’s interpretations. It is best viewed overall as a story about patterns of behaviour. It is not about what a person says but how they act and treat others that counts. It asks us to read the characters’ actions in the moment and then at the end review what we have previously seen. This personal analysis further ingrains Burning in tragedy. We achieve a level of understanding that eludes one of the major players. It is an ambiguous story but in terms of character building and suspense it sears itself into our minds and refuses to let go.

Summary: It is an ambiguous story but in terms of character building and suspense it sears itself into our minds and refuses to let go.