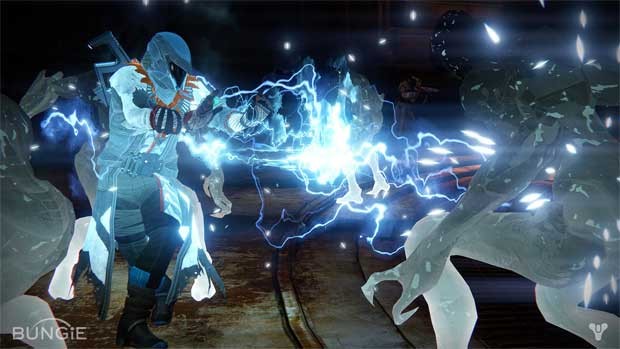 The third and final Twitch stream on the April Update explored The Crucible and Sandbox changes. Guardians will see Special and Heavy Ammunition appearing less frequently on the battlefield, when reviving a teammate more strategy will be required, and weapons will be going back to the workbench. Catch up here before the April Update goes live on Tuesday, April 13th, 2016.

High Rate-of-Fire (RoF) bullet hoses have been leading the pack in terms of competitive viability. Low RoF auto rifles are slightly behind their faster firing brethren. We’re tipping the scales ever so slightly on these weapons to try and create more options.

As with the auto rifles, the lowest RoF pulse rifles aren’t quite as effective as the faster firing models. The damage increase here doesn’t reduce bursts to kill against high Armour players in PVP, but it will provide more damage per burst which will help when team shooting and getting clean up kills.

Hand Cannons were running lean on ammo inventory during PVP streaks and lengthy PVE encounters. We are increasing their ammo inventory amounts by a bit to not leave you scrounging for white bricks too often, but not so much that you don’t need to worry about making shots count.

The changes made in the last patch were somewhat more in depth than a blanket stability reduction: changing the ADS/Hip bolt spread paradigm as well as charge rate/damage tradeoffs. Rather than continue to play with nuance, this time we’re just going to do a blanket stability improvement.

The intent for Sniper Rifles has always been lethality at a distance using a measured approach. There are a few scopes and models of Sniper Rifles that are pushing the limits of “distance” and allowing for pretty effective twitch combat shooting at what many would consider medium range. These changes aren’t intended to remove that style of combat, but they are intended to put the player at slightly longer ranges for that style to be as effective as it is currently.

Ally resurrection is a huge strategic factor in high intensity PVP and PVE, with many Guardians meeting a grizzly fate when assisting downed teammates.