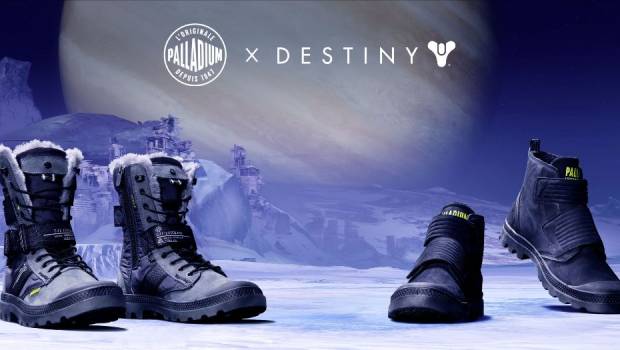 Bungie Enters into a Partnership with Palladium for a Limited-Edition Collab Inspired by Destiny 2: Beyond Light

Following the sell-out success of the first instalment a year ago, Bungie and Palladium join forces again with a new collection of branded boots inspired by Destiny 2: Beyond Light set in the frozen frontier of Europa.

The new collaboration combines Palladium’s sense of exploration with Destiny 2‘s intergalactic setting to deliver a collection designed for Guardians all around the round. Featuring stylistic references to in-game locations and themes, each boot seamlessly blends reality with the Destiny universe.

The Pampa Sub Zero features a silhouette similar to Palladium’s iconic Pampa but with a futuristic update featuring Velcro® fastenings, reflective metal carabiner heel tabs and neon yellow insignia contrasting against a black leather colour base. The Pampa Sub Zero is an agile mid-rise ankle boot, developed with the cosmic Guardian in mind.

Conceived by Palladium as the daily boot to withstand the rigors of interplanetary travel, the Pampa Sub Zero will provide you with enough cover for your daily life on Earth. Its mid-top styling and easy entry straps keep you dynamic, while full insulation and Palladium’s trademark lugged sole will keep you looking intrepid.

The Pampa Europa Tactical is developed for the barren inhospitable landscape of Europa with a faux fur lining and a hi-rise above-the-ankle upper inspired by the protective boots favoured by artic explorers here on Earth. Like the Pampa Sub Zero, the Pampa Europa Tactical arrives in a muted colour palette with neon yellow coding and flight tabs. Each colourway reflects the desolate landscapes brought to life in the new Destiny expansion with moonrock grey and deep space black providing key colourways.

Inspired by the survival needs of Guardians who navigate the frozen landscape of Europa, the Pampa Europa Tactical is built for the colder climates. With hibernal missions in mind, its warm tech lining, ultra hi-cut and premium nubuck upper fearlessly defends against the most inhospitable of environments.

Each boot is presented in packaging decorated with the celestial map and radials, both key components in Destiny‘s ‘epic sci-fi action’ aesthetic.

Both styles are now available to purchase at www.bungiestore.com & www.palladiumboots.com.