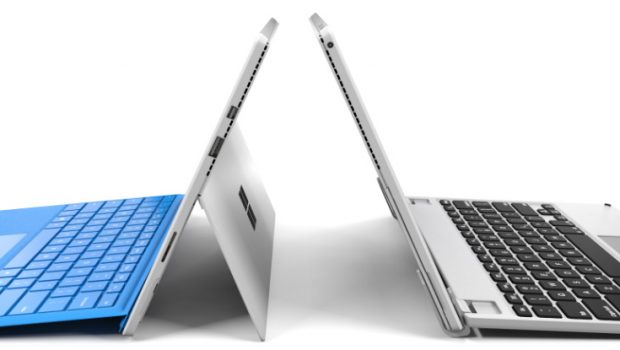 MAY 25th, 2017:  Brydge, the company that set a new benchmark for iPad keyboards around the world, is proud to launch its first keyboard for the Microsoft Surface Pro in Australia. The Brydge 12.3 (RRP$249), which was named a CES 2017 Innovation Awards Honoree earlier this year when it launched in the U.S., is now available at JB Hifi and selected Harvey Norman stores around the country.

Headed up by Australian duo, Nicholas Smith and Toby Mander-Jones, who have transformed Brydge into a multi-million dollar operation that sells in more than 100 countries, Brydge made its mark initially by designing and delivering innovative keyboards for iPads.  Combining laptop productivity with tablet mobility, Brydge is now bringing its sleek design, high-quality construction and innovative functionality to Microsoft Surface users.

Unlike any other keyboard on the market, the Brydge 12.3, transforms the Surface into the ultimate laptop.  It is the only keyboard for the Microsoft Surface Pro that removes the dependency of a kickstand, allowing the user to have a full laptop-like experience.  Marketed as the perfect laptop-tablet hybrid, the Brydge 12.3 brings a 100 percent aluminium body with a full backlit keyboard, 180-degree screen rotation and adaptive trackpad to the Microsoft Surface.  Brydge has also released a model with 128gb integrated storage – currently available via its website – www.brydgekeyboards.com.

“Surface users have been waiting for a powerful and complementary keyboard like the Brydge 12.3,” says Brydge Managing Director, Toby Mander-Jones.  “The Surface is a powerful and versatile device that deserves a keyboard that unlocks its true potential.” he said.

Mander-Jones believes the Brydge 12.3 provides Surface users with a keyboard that has greater functionality than the entry-level model and at a better price than the Surface Book.  “The combination of the Brydge 12.3 and Surface creates a game-changing package that transforms the Surface into a true laptop replacement and the ultimate in mobile computing for Windows users,” he said.

The Brydge 12.3 is priced at RRP $249, and is now available in JB HiFi and selected Harvey Norman stores or online at www.brydgekeyboards.com.