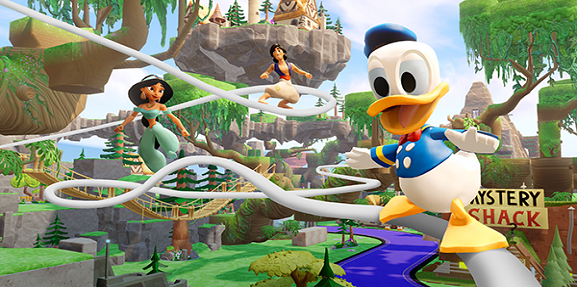 One of Disney’s most iconic characters is coming to the Disney Infinity Toy Box 2.0! Today, Disney Interactive announced that Donald Duck will join the cast of characters set to appear in Disney Infinity 2.0, alongside other fan favourites – Merida, Maleficent, Stitch, Tinker Bell, Aladdin and Jasmine.

Joining Sorcerer’s Apprentice Mickey from Disney Infinity, Donald Duck is the second of Disney’s fab five to be added to the Toy Box and is sure to bring nostalgia to Disney fans everywhere. Donald Duck delivers his signature catch-phrases, fiery temper and special abilities like tossing objects, sweeping up enemies with a broom and becoming a feathered fury to the new Toy Box mode where families will be able to use hundreds of Disney and Marvel themed items, locations, props, vehicles and characters to create one-of-a-kind adventures.

Don’t get your feathers in a ruffle quite yet! A new Donald Duck themed Power Disc will also be available for players to use in the Toy Box mode to customise and enhance the experience. Players will be able to use the “All for One” Power Disc to change their Donald character into a Three Musketeers costume.