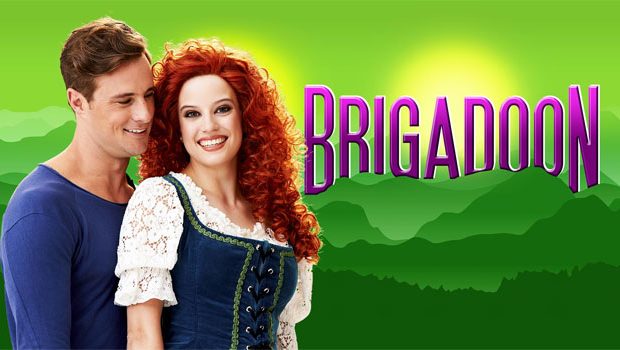 Summary: Brigadoon is a very delightful musical that works on all levels

Arriving at the State Theatre for the Production Company’s latest musical Brigadoon for its opening night was full of anticipation and surprises. Also, the Arts Centre Melbourne makes for the perfect venue and while waiting in the lobby, patrons were treated to a beautiful collection of costumes from previous productions before taking their seats. Directed by Jason Langley with Musical Director Michael Tyack, Brigadoon features a cast of 28, a band of 21 and a real-life piper playing Scottish bagpipes.

Brigadoon is a musical which channels its inner core from the Golden Age of Hollywood (even though elements of modernity are thrown into the mix) and as the show started, the audience is introduced to two lost American hikers (Tommy and Jeff) in the highlands of Scotland who are about to stumble upon something very special. Soon enough, these two New Yorkers meet a group of people that magically appeared from the mist as they take them to their mythical village of Brigadoon.

Here they become involved in their everyday activities of this village, their pain, jealously and love… including some amusing comedic moments. Tommy (Rohan Browne) who is unhappily engaged to a girl in New York falls in love with Fiona (Genevieve Kingsford) and he becomes conflicted with emotions, including making the choice of staying with his soulmate in Brigadoon forever. Then you have his comedic ‘sidekick’ of Jeff (Luke Joslin) who adds an amusing layer of comedy in this delightful production.

The performances from Rohan Browne and Genevieve Kingsford as the two lovers were enjoyable as was Nancye Hayes who plays the matriarch of Brigadoon plus Elise McCann who added to the comedic performance of Luke Joslin and is unlucky in love. Needless to say, some fun clichés. Complementing the main characters was the very energetic cast who almost involved the audience in their performance.

One scene had a group of them appearing from the back of the theatre as they walked down the aisle or chased a group with whom they had a fight which made it quite an interactive experience. Overall, the entire cast were excellent, their acting and singing were faultless to me. It also felt like they were not acting but were the real people of this village called Brigadoon and their singing felt like it was from a bygone era. As a result, the beautiful music, story and the acting embraced me and made me feel like a time traveller.

The costumes thanks to Costume Designer Isaac Lummis (Dusty) were spectacular and well suited to performance which really helped draw you into this production. Although the stage was very minimalistic with one main central prop with many smaller ones as the story required (i.e. the market scene with carts and tables), this didn’t affect the story as a lot was achieved with semitransparent curtains, lighting and projection. Also, the orchestra was almost invisible as they were discretely seated in the back of the stage rather than in an orchestra pit which helped with the illusion of this magical village… not to mention their flawless music.

Brigadoon is a very delightful musical that works on all levels and if you’re after a great night out, do yourself a favour and get whisked away to this magical village from a simpler time.