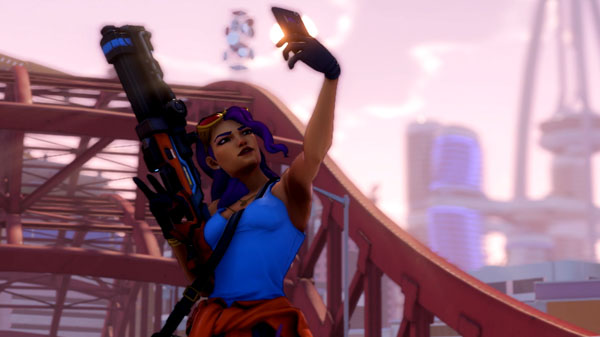 In our briefing video today, we are introducing the most explosive trio at MAYHEM, the Bomb Shells.

Don’t be fooled by Joule’s beautiful, sweet exterior; behind the high fashion lies a mind of robotic engineering genius that makes her equally as comfortable walking the runways in stilettoes as engineering deployable murder turrets.  With her Master Programmer ability, Joule is the perfect complement to Rama.  As the world’s foremost immunologist, Rama uses her deadshot ability gaining precision the more she charges her bow.  As a shield buster Rama deals bonus damage to shields and pierces targets protected by hard shields.  No team is complete without a resident, football obsessed lunatic.  Redcard wields his Hooligan weapon to pierce the skin of his unfortunate enemies, precisely hitting them with his close range charge attacks to clear the crowd.

When circumstances are at their most dire, when the pressure is at its absolute utmost, when the only solution is to send in the big guns, call in the Bomb Shells.

With the teleport technology capability of MAYHEM, agents in your squad are able to instantly teleport into and out of combat. This allows on-the-fly swapping of agents in the field, allowing one to heal while another takes their place, or allowing the best agent for a particular fight or task in your squad of three to replace the currently active one.

Agents of MAYHEM is a single-player, open-world, third-person action game for the PS4, Xbox One, and PC gaming systems releasing on August 18th in Australia. For more information and to get the latest updates on the game, follow us on Twitter at @aomthegame or on Facebook at Facebook.com/aomthegameuk, or visit aomthegame.com.

To listen to the awesome Agents of Mayhem trailer music please link through to SoundCloud here: