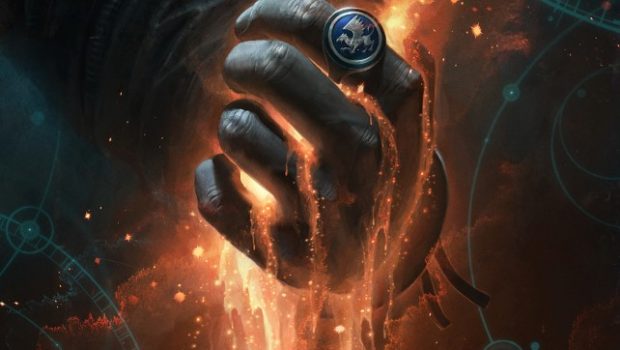 Fans will gain insight into how the early years of iconic figures Gurney Halleck, Lady Jessica, and Liet Kynes had their future shaped by the complex and brutal machinations of House Harkonnen! What difficult choices will tear Leto Atreides apart as Baron Harkonnen plots against not just House Atreides, but the Bene Gesserit and the Emperor himself?

“Speaking for the Frank Herbert family, I am extremely pleased to be able to provide beautifully-illustrated comic editions of DUNE: HOUSE HARKONNEN for Dune fans. This is the second novel I wrote with Kevin, and the new series launch brings to my mind the excitement of our national book tours around the turn of the millennium, and the wonderful receptions we received from fans. Our own enthusiasm for Frank Herbert’s fantastic Dune series has never waned, and our spirits are constantly buoyed by the incredible support we continue to receive from readers. We hope you enjoy the new series as much as we have enjoyed writing the stories,” said Herbert.

Brian Herbert is the son of legendary science fiction author Frank Herbert and has written the definitive biography of him, Dreamer of Dune, a finalist for the Hugo Award. Brian has also written many highly imaginative novels, including the Timeweb trilogy, the ecological fantasy Ocean (with his wife, Jan), The Little Green Book of Chairman Rahma, The Unborn, and The Assassination of Billy Jeeling. His earlier acclaimed novels include The Stolen Gospels, Sudanna Sudanna, and Sidney’s Comet, as well as Man of Two Worlds (written with his father). Brian has collaborated on many novels in the Dune series with Kevin J. Anderson, all of which became international bestsellers, and they also wrote the Hellhole trilogy together. They recently completed the novel Dune: The Heir of Caladan for Tor, and are also collaborating on the definitive graphic novel adaption of the novel Dune, as well the 2022 Dragon Award-winning adaptation of their collaborative novel, Dune: House Atreides, for BOOM! Studios. Brian also co-manages the legacy of Frank Herbert (with Byron Merritt and Kim Herbert) and is an executive producer of the new motion picture “Dune” and the forthcoming TV series “Dune: The Sisterhood.” He and his wife live in Seattle, Washington.

“House Harkonnen is one of my favorites of all the Dune novels Brian and I have written—dark and emotionally powerful, with some of the most spectacular scenes in the long history set in Frank Herbert’s universe…and they just cried out to be done visually. I am so excited that BOOM! is continuing our ‘Prelude to Dune’ trilogy in comic form.” said Anderson.

Kevin J. Anderson has published more than 175 books, 58 of which have been national or international bestsellers. He has written numerous novels in the Star Wars, X-Files, and Dune universes, as well as unique steampunk fantasy trilogy beginning with Clockwork Angels, written with legendary rock drummer Neil Peart. His original works include the Saga of Seven Suns series, the Wake the Dragon and Terra Incognita fantasy trilogies, the Saga of Shadows trilogy, and his humorous horror series featuring Dan Shamble, Zombie P.I. He has edited  numerous anthologies, written comics and games, and the lyrics to two rock CDs. Anderson is the director of the graduate program in Publishing at Western Colorado University. Anderson and his wife Rebecca Moesta are the publishers of WordFire Press. His most recent novels are Clockwork Destiny, Gods and Dragons, Dune: The Heir of Caladan (with Brian Herbert), and Slushpile Memories: How NOT to Get Rejected.

“For better or worse, HOUSE HARKONNEN is a force of nature within the Dune universe, at the center of the pivotal moments that have determined the fates of entire planets and civilizations,” said Shantel LaRocque, Senior Editor, BOOM! Studios. “Brian and Kevin have done an incredible job of bringing the power of the Harkonnens to life as their machinations begin to entangle them within the lives of the Atreides, leading to the explosive events of Dune.”

DUNE: HOUSE HARKONNEN is the newest release from BOOM! Studios’ eponymous imprint, home to critically acclaimed original series, including BRZRKR by Keanu Reeves, Matt Kindt, and Ron Garney; Something is Killing the Children by James Tynion IV and Werther Dell’Edera; Once & Future by Kieron Gillen and Dan Mora; We Only Find Them When They’re Dead by Al Ewing and Simone Di Meo; Eve by Victor LaValle and Jo Mi-Gyeong; The Many Deaths of Laila Starr by Ram V and Filipe Andrade; Wynd by James Tynion IV and Michael Dialynas; Basilisk by Cullen Bunn and Jonas Scharf; Grim by Stephanie Phillips and Flaviano; Briar by Christopher Cantwell and Germán García; Stuff of Nightmares by R.L. Stine and A.L. Kaplan; The Approach by Jeremy Haun, Jason A. Hurley, and Jesus Hervas; and the upcoming Damn Them All by Simon Spurrier and Charlie Adlard; Behold, Behemoth by Tate Brombal and Nick Robles; Specs by David M. Booher and Chris Shehan; Once Upon a Time at the End of the World by Jason Aaron, Alexandre Tefenkgi, Leila del Duca, and Nick Dragotta; Know Your Station by Sarah Gailey and Liana Kangas; and A Vicious Circle by Mattson Tomlin and Lee Bermejo. The imprint also publishes popular licensed properties, including Mighty Morphin Power Rangers from Melissa Flores and Simona Di Gianfelice; and Magic from Jed McKay and Ig Guara.

Print copies of DUNE: HOUSE HARKONNEN #1 will be available in January 2023 at local comic book shops (use comicshoplocator.com to find the one nearest you), or at the BOOM! Studios webstore. Digital copies can be purchased from content providers like comiXology, iBooks, Google Play, and Kindle.

For continuing news on the DUNE comic books from BOOM! Studios, stay tuned to boom-studios.com and follow @boomstudios on Twitter.