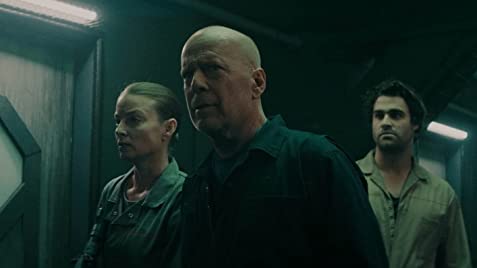 If life were fair and just, this review of the new sci-fi movie Breach would only be four words long: ‘go watch Aliens instead’. That would be all you needed to know about the latest Z-Grade movie to make its way to our screens during the COVID-19 pandemic. Nonetheless, there is a wordcount to reach so here we go.

Breach is set in the year 2242, where apparently everybody looks, dresses, talks, and acts like people do in 2021. Earth is officially dead (global warming? Pollution? We never find out) and citizens are flying through space to reach ‘Earth 2’. Yep, that’s what the planet is called. Moving on. Cody Kearsley plays Noah (get it?), a lowly mechanic who has snuck onto the last spaceship heading to salvation.

Noah is a normal looking guy but with janitor overalls and enough facial scruff to make him seem dirty. This leads to some unintentionally hilarious comedy when his super pregnant wife, Hayley (Kassandra Clementi), is introduced. She appears immaculate, almost to the point of angelic despite the rest of the world being forever covered in dirt and grease. Writers Edward Drake and Corey Large (along with director John Suits) rapidly sideline Breach’s female characters. Hayley undergoes a Walt Disney-esque cryo-sleep while the few other women are either killed off or cast aside.

Additionally, Breach falls into the trap of hitting every horror and sci-fi trope and cliché imaginable. There are frozen sleepers, tough military guys, softly spoken nerds, and badass tough talking chicks who can just hang out with the boys. For every science fiction cliché, there are ten other obvious no-nos when it comes to telling spaces stories. How are we meant to take this movie seriously when there’s outdated weaponry being fired inside a moving spacecraft? Or what about the fact that the characters smoke paper and tobacco cigarettes inside a vacuum seal? Could the director not project any futuristic vapes on screen?

I’m sure a boom mic operator had at least one in their cargo shorts pocket to lend. Oh and an alien is on board the spaceship too. If you want to learn the plot of this story just go watch Alien (1979). This movie has taken all the best parts of the classic film and recycled them to create the shittiest movie of the year. Technically, Bruce Willis is in this movie, but his acting choices suggest he is having a whole lot of fun in a different film. Willis plays Clay, a surly, unfriendly space travelling veteran who has seen and done it all to the point of boredom…you know, like the real Bruce Willis. I’m not saying Bruce Willis has lost the passion for acting but the cheap, Instagram filter, holographic image of Willis that randomly appears sometimes is more engaging than a flesh and bone version of the actor.

Thomas Jane may be the only one who knows what kind of movie was being made. His interesting choice of accent is too strange to ignore. Jane plays the leather jacket wearing, southern admiral Adams-King who does not take nonsense from anyone. Plus, he looks like a young Joe Biden when he puts on his avatar sunnies on…indoors…in outer space. As the alien picks off the crew one by one, there is not enough suspense built let alone enough character development for there to be any expectation on the viewer to care about who lives and who dies off-screen (this happens a lot). 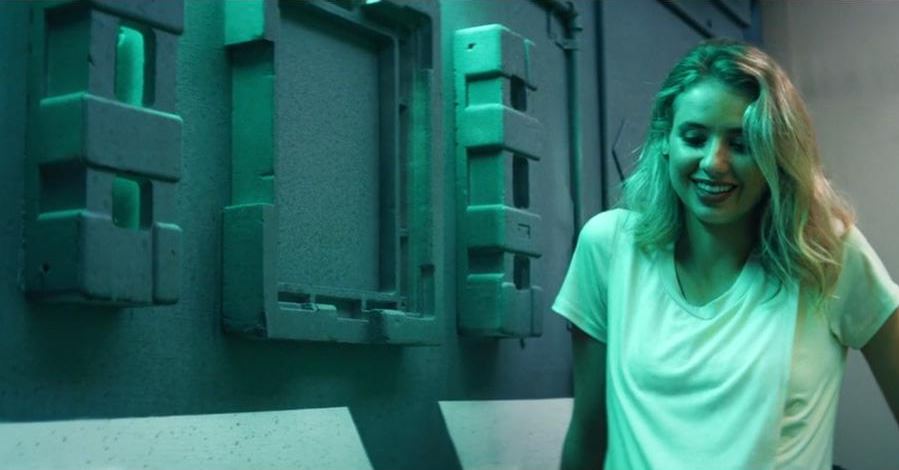 This review is not disrespecting filmmakers who create stories on small budgets. However, this movie must have been made on a shoestring because every aspect is cheaper than cheap. The set designs are so generic and uninspired that it seems like the studio took props out of the garbage bin behind George Lucas’ house and ran for the hills. The actors do their best throughout this whole mess, but somebody should have taken them to a gun range for a day because no one looks comfortable holding a prop gun.

Watching the actors stumble their way through some terrible action sequences would make for a good drinking game. Take a shot each time somebody does something stupid on a spaceship, such as firing a bullet or bringing out some explosive/corrosive liquids onto a vessel hurling through space. Sip your beer every time Bruce Willis looks bored on screen. Neck some tequila whenever the lousy CGI alien comes on screen. Devour everything in your liquor cabinet when the end credits roll because you will want to forget you ever saw this movie.

Summary: Devour everything in your liquor cabinet when the end credits roll because you will want to forget you ever saw this movie.