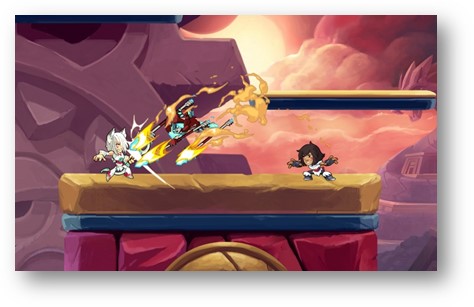 Brawlhalla Comes To Xbox One And Nintendo Switch On November 6

SYDNEY, AUSTRALIA — August 22, 2018 — Ubisoft has announced Brawlhalla, its free-to-play platform fighter game with more than 15 million players on PC and PlayStation®4 computer entertainment system, will be launching on Xbox One and Nintendo Switch on November 6. Odin, King of the Gods, built a heaven for warriors and called it Valhalla. On his command, Valkyries, beautiful goddesses of war, scoured the universe for the greatest warriors to fill this hall. To Odin’s surprise, the Valkyries brought back not only vikings, but legendary warriors of every description, and soon pirates, cowboys, Mongol warriors, Amazons, even monsters and aliens roamed the hall.

While waiting for Ragnarok, the warriors become bored. Constant battle spilled out of the Great Hall, and Asgard was smashed to rubble again and again. Odin, pulling his hair out in a last moment of desperation, set up the grand tournament. Now, the best warriors from every time and place fight to become champion, while the Valkyries constantly venture far and wide to bring back warriors who will earn them honor in Brawlhalla.

Developed by Blue Mammoth, Brawlhalla is an epic free-to-play platform fighting game that brings players to the fight for glory in the halls of Valhalla on PlayStation 4 and Steam, and will release on Xbox One and Nintendo Switch on November 6. Choosing from over 40 unique characters, players can jump into single-player and co-op modes as well as online and local competitions. The third annual Brawlhalla World Championship will take place at Dreamhack Atlanta November 16-18. For more information on Brawlhalla, please visit: http://www.brawlhalla.com. For the latest news on Brawlhalla and all of Ubisoft’s games, visit Ubisoft News: https://news.ubisoft.com/