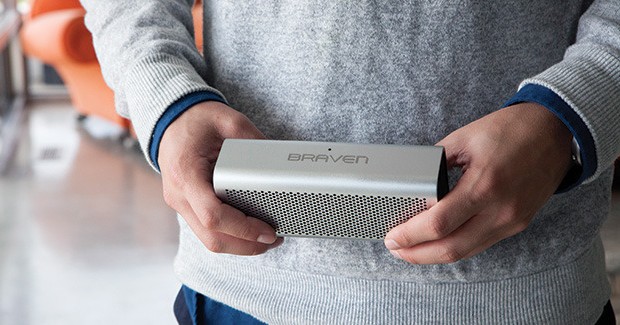 SYDNEY, Australia – 30 April 2014 – BRAVEN announced the immediate availability of the BRAVEN 710, the ultimate portable water resistant Bluetooth wireless stereo speaker crafted from aircraft-grade aluminium and designed to satisfy even the most demanding audiophiles. The BRAVEN 710 delivers the perfect blend of heart pumping bass, crystal clear highs and ease of use by perfectly incorporating powerful HD audio drivers, TrueWireless™ Technology and NFC.  TrueWireless™ Technology allows wireless pairing with a second 710 to create a right and left stereo sound, while NFC enables linking with other NFC enabled devices by simply touching them or bringing them into close proximity.

True to BRAVEN’s heritage of speaker design, the BRAVEN 710 is equipped with a built-in noise-cancelling speakerphone and is capable for charging USB devices with its integrated power bank. It is IPX5 water-resistant, enjoys a unique mute functionality under Bluetooth Bridge to seamlessly synchronise streaming audio from your device to a stereo system and supports APTX technology.  The 710 can also be daisy chained with additional 710 speakers to create a traditional hi-fi stereo system. “The 710 is a prime example of how technology and design can combine to satisfy even the most demanding audiophiles on the go,” stated Andy Fathollahi, Chief Executive, BRAVEN. “The 710 is BRAVEN’s newest model and it incorporates all the technologies that have made BRAVEN a leading brand in portable wireless speakers.”