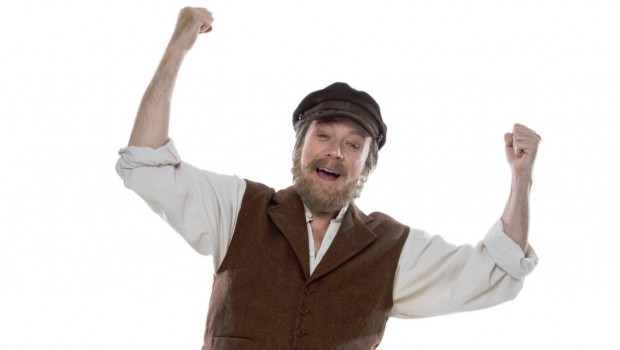 A brand new production of one of the greatest musicals in history, FIDDLER ON THE ROOF starring Australian superstar Anthony Warlow, will open at Melbourne’s Princess Theatre on December 29th playing for 6 weeks only. The production will also play a limited 6 week season in Sydney at the Capitol Theatre from March 24th. Tickets will go on sale on Friday 25th September from Ticketmaster.

As one of the world’s most loved musicals, Fiddler on the Roof has captured the hearts and imaginations of audiences around the world for over 50 years with its humour, warmth and honesty. FIDDLER ON THE ROOF follows the heart-warming journey of a family that has its traditional life turned upside down as the modern world starts to impact on life in their idyllic village. Striving to maintain traditions, like the fiddler on the roof, this classic tale is a celebration of life, love, family and ultimately a story of hope.

Anthony Warlow has spent the last 3 years starring on Broadway playing Daddy Warbucks in Annie and most recently replacing Kelsey Grammar in Finding Neverland. As one of Australian theatre’s leading men, Anthony has starred in many iconic productions such as Les Misérables, Phantom of the Opera, My Fair Lady, Man of La Mancha and Dr Zhivago. Anthony will return to Australia shortly to commence preparations for this new production.

“It has been a quiet passion of mine to one day play the role of Tevye in FIDDLER ON THE ROOF and I am thrilled to have the opportunity to bring this coveted role to life in a sensational new production,” said Anthony.

“I have always been moved by the ability of this touching story of father/ daughter relationships and the timeless traditions that define faith and family to carry audiences from laughter to tears in a matter of moments. I look forward to Australian audiences joining me in revisiting this iconic musical.”

Further casting will be announced at a later date.

FIDDLER ON THE ROOF’s celebrated score by Jerry Bock and Sheldon Harnick, features songs loved the world over, Tradition, Sunrise Sunset, Matchmaker, To Life and of course, If I Were A Rich Man.

Written by Joseph Stein and based on Sholem Aleichem’s short story, ‘Tevye and His Daughters’, FIDDLER ON THE ROOF debuted at the Imperial Theatre on Broadway in 1964. It ran for 3,242 shows, becoming the longest-running musical in 1972. It won nine Tony Awards, including Best Musical, Best Actor, Best Supporting Actress and Best Director, as well as awards for author, producer, choreographer, costume design and, composer and lyricist. It won another Tony Award for Best Revival of a Musical in 1991. In 1971, the movie version, starring Topol was nominated for Best Picture and picked up three Academy Awards. The show has enjoyed many London and Broadway revivals, the latest opening at the Broadway Theatre this November.

“Fiddler on the Roof is a universal story of hope, love and acceptance, a stunning, joyful and jubilant musical masterpiece.” New York Daily News

“One of the most glowing creations in the history of musical theatre.” The New York Times

Set in 1905 in a small Jewish village in Tzarist Russia, FIDDLER ON THE ROOF tells the story of milkman Tevye and his attempts to preserve his family’s traditions in a changing world. One of Tevye’s 5 daughters, Tzeitel, wants to marry a poor tailor instead of a middle-aged butcher her father has chosen for her in the tradition of arranged marriages. The story follows Tevye as he attempts to hold onto his family values despite sweeping social change.

This new Australian production of FIDDLER ON THE ROOF is produced by Tim Lawson for The Works Entertainment, (The Illusionists, Chitty Chitty Bang Bang, A Chorus Line), directed by the acclaimed Roger Hodgman (Chitty Chitty Bang Bang) and boasts the award winning choreography by Jerome Robbins (West Side Story).

“It has always been a privilege to present this iconic musical in Australia” says Tim Lawson ‘It has brought so much joy to so many. To team up again with Roger Hodgman, one of the finest directors in the world, and the awe inspiring talent and magnetic personality of Anthony Warlow is a thrill beyond belief. I know this is going to be one of the best productions of the show ever to be seen in the world’

Do not miss Anthony Warlow’s performance of his career as he stars in one of the world’s most beloved musicals for 6 weeks only at Melbourne’s Princess Theatre from Dec 29 and Sydney’s Capitol Theatre from March 24.

FIDDLER ON THE ROOF will be a theatrical experience not to be missed.