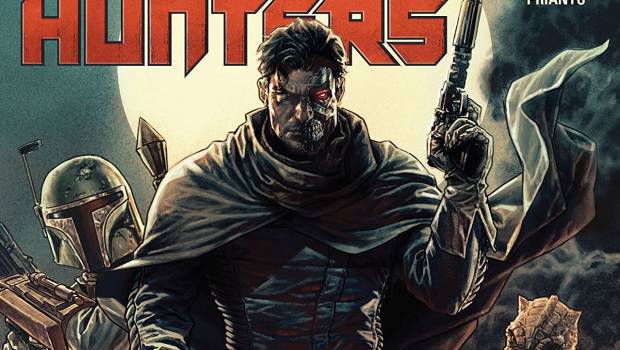 Summary: Bounty hunters Vallance, Bossk and Boba Fett face off for a big bounty, will they find their target before they kill each other?

Jumping straight into the action during a botched job on Corellia, we meet the bounty hunters Vallance (last seen in Target Vader), Bossk and everyone’s favourite Boba Fett. The story does jump around between them including a cameo by Dr Aphra but they all end up getting the same bounty that sets them on a collision course as they have unfinished business.

If you are after action, this has it in spades and even the quieter scene has an angry Wookie trying to rip Bossk’s arms off. There is hardly time to draw a breath in this story, but these characters do all the dirty work in the Star Wars galaxy so you would expect them to be in the middle of the worst fights all the time.

Although we have met Vallance and Bob Fett previously, this is the first time I have seen anything with Bossk as you only ever see him in the Empire Strikes Back when Vader is talking to the bounty hunters. I do remember there being an action figure of him.

As with the Darth Vader series this has a lot of potential to go places with the story but does not seem like it is going in the back stories and motivations of the characters as much and you would not want it to given this story, you want blasters going PEW!

Was great to see Dr Aphra make an appearance in this movie, her series is released next month. From what I heard she is like a space Indiana Jones.

Not sure if any of the main series characters will make an appearance in the flesh as although it is set around the same time as the original trilogy it seems to be off in other parts of the galaxy. This is one story you may need to get access to a galaxy map to work out where the planets are as they jump around a lot even in this story.

I would recommend this one if you are fans of Boba Fett and want to see more stories featuring him. The success of the Mandalorian would also help out this movie and bring more fans to it.