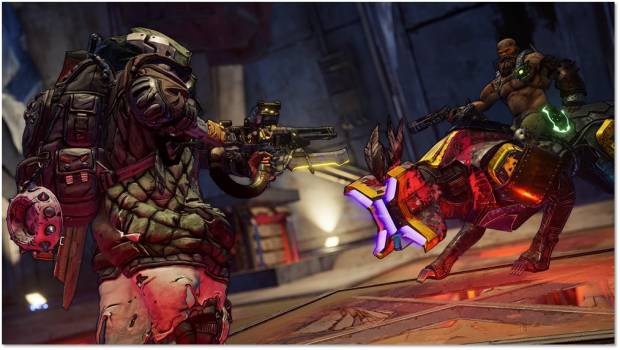 The latest episode of The Borderlands Show was jam-packed with exciting Borderlands 3 news, including the announcement of Borderlands 3® Ultimate Edition, the reveal of four radically re-envisioned Vault Hunter models, and the first look at gameplay for the brand new Arms Race that launches November 10 as part of the Designer’s Cut add-on, which can be purchased alone or as part of Season Pass 2.

Framed as a reality show hosted by Borderlands 2 Vault Hunters Axton and Salvador, Arms Race offers a roguelike experience that’s fast-paced, challenging, and consistently remixed by randomized elements. You’re stripped of all your gear, passive abilities, and Actions Skills and dropped into a new zone where you’ll have to get loot or die trying. The action takes place throughout the Stormblind Complex: an expansive, decommissioned DAHL military base set on a wintry island in a previously hidden corner of Pandora.

As soon as you drop onto the island, you’re racing against the clock to grab the best gear you can and get it to an extraction point before you’re obliterated by an encroaching storm. If you hope to extract the very best Legendary loot that drops exclusively in Arms Race, you’ll need to gear up and face off against Heavyweight Harker, the final boss of the Stormblind Complex. You can resurrect fallen co-op allies at designated respawn points, but if no one’s around to revive you, your Arms Race run is over and any loot you failed to extract is gone forever.

By putting the focus squarely on guns and gameplay, Arms Race makes every loot drop meaningful and exciting. It also levels the playing field so Vaults Hunters of all experience levels can drop in together and feel equally challenged (and rewarded). To learn more about Arms Race and to see the first footage of this new mode in action, check out this blog.

Arms Race, as well as a new set of Skill Trees, will be included in the Designer’s Cut add-on. Designer’s Cut requires a copy of Borderlands 3 to play and can be purchased individually or as part of Season Pass 2. Season Pass 2 will include two all-new downloadable content add-ons – Designer’s Cut and Director’s Cut – and will be available for purchase starting November 10 across PC, Stadia, PlayStation 4, PlayStation 5, Xbox One, and Xbox Series X / Series S. The Designer’s Cut add-on also launches on November 10, while Director’s Cut – which includes additional missions, end-game content, and behind-the-scenes extras – is planned for release in spring of next year.

Today’s episode of The Borderlands Show also featured another reveal: the Multiverse Final Form cosmetics packs. Unlike any previous cosmetics add-on, these packs provide four entirely new character models, one for each Vault Hunter. The Final Forms depict how each character might’ve turned out in an alternate universe where they never became a Vault Hunter. These new cosmetics can be mixed and matched with other Bodies and Heads as desired and can also be paired with all existing skins. For a closer look at the Final Form models, please click here.

Like Arms Race, the Multiverse Final Form cosmetics packs will be available as part of Season Pass 2, though you can also pick up these packs if you purchase the brand new Borderlands 3 Ultimate Edition, which delivers the quintessential Borderlands 3 experience. Ultimate Edition grants you access to the award-winning base game, multiple bonus cosmetic packs, and both the original Season Pass and Season Pass 2, which combined offer six exceptional content add-ons.

The slick Final Form models are also included in Borderlands 3 Next-Level Edition, a new console-only version that includes the base game and the Multiverse Final Form cosmetics packs. Finally, as a thank you to everyone who has maximized their mayhem thus far, the Multiverse Final Form cosmetic packs will be granted to all players who own Borderlands 3 Super Deluxe Edition or the original Season Pass, with no additional purchase necessary.

And don’t forget, Borderlands 3’s next-gen upgrade will be available day-and-date alongside Microsoft and Sony’s new consoles. The next-gen version of the game will be playable at launch on the Xbox Series X / Series S on November 10, as well as on the PlayStation 5 when it launches on November 12. All players who own or purchase both a copy of the game and a next-gen console will be able to download the upgrade within the same console family for free. Players that own a physical disc of Borderlands 3 will need the Xbox Series X or standard PlayStation 5 console model that includes a disc drive to take advantage of this feature.