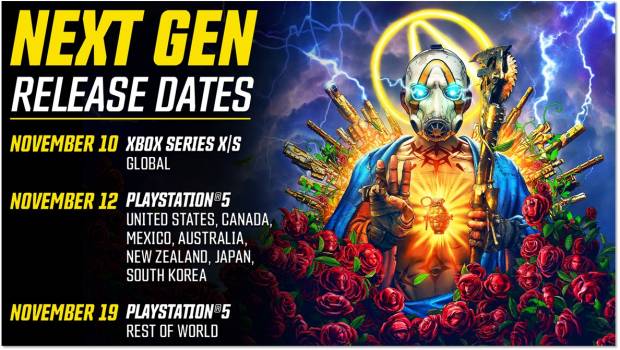 Get ready for a new generation of mayhem, Vault Hunter! We’re proud to confirm that Borderlands® 3’s next-gen upgrade will be available day-and-date alongside Microsoft and Sony’s new consoles. The next-gen version of the game will be playable at launch on the Xbox Series X / Series S on November 10, as well as on the PlayStation 5 when it launches on November 12 in the US, Japan, Canada, Mexico, Australia, New Zealand, and South Korea and on November 19 in the rest of the world. All players who own or purchase both a copy of the game and a next-gen console will be able to download the upgrade within the same console family for free.

“Borderlands is a ground-breaking, record-setting, critically acclaimed franchise where millions upon millions of gamers have experienced one-of-a-kind gameplay, mayhem, and fun across multiple generations of gaming technology,” said Randy Pitchford, Executive Producer and Founder of Gearbox Entertainment. “With Borderlands 3 continuing to grow and launching this November on next-generation PlayStation and Xbox consoles, there has never been a better time to jump in and join the fun.”

Borderlands 3 has been fully optimized to take advantage of the next-gen consoles’ processing power, bringing a new level of graphical fidelity to the Borderlands universe. The Xbox Series X and PS5 will display Borderlands 3 at 60 frames per second in 4K resolution during single-player and online co-op, and all next-gen consoles will support three- and four-player split-screen for local multiplayer. In addition, vertical split-screen for two-player local co-op will be available from the get-go on next-gen consoles and will also be added to the Xbox One and PlayStation 4 versions via a free update on November 10 and 12 respectively.

Existing owners of Borderlands 3 on current-gen platforms can easily transition to the next-gen version within the same console family. If you own Borderlands 3 on Xbox One, you’ll be able to play the Xbox Series X/S version, and if you own the game on PlayStation 4, you’ll be able to play the PlayStation 5 version. Your add-on content and save files can be ported to next-gen consoles within the same family, so you can jump straight back into the action right where you left off. (Please note that if you own a physical disc of Borderlands 3, you will need the Xbox Series X or standard PlayStation 5 console models that include a disc drive to take advantage of all these features.)

If Borderlands 3 on PlayStation 5 and Xbox Series X/S will be your introduction to Pandora and the planets beyond, welcome to the party! Borderlands 3 has you blasting through multiple worlds as one of four Vault Hunters – the ultimate treasure-seeking badasses, each with deep skill trees, abilities, and customization. Play solo or join with friends to take on deranged enemies, score loads of loot, and save your home from the most ruthless cult leaders in the galaxy, then continue your adventures across an unforgettable collection of campaign add-ons and additional upcoming DLC.

We’ll have plenty more exciting news to share during a special episode of The Borderlands Show premiering October 29 at 9:00 AM PT over on the Borderlands Twitch channel. Until then, get ready to experience mayhem like never before with Borderlands 3 as a launch title for the Xbox Series X/S and PlayStation 5.