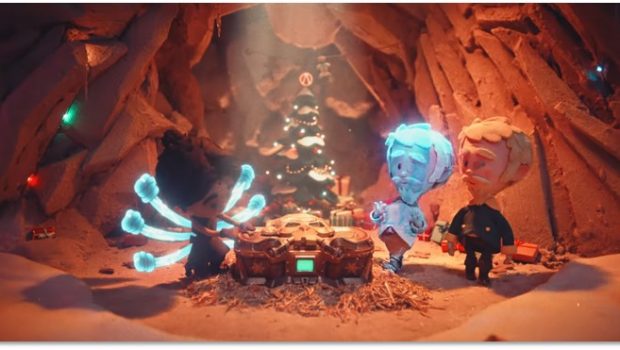 Season’s greetings, Vault Hunter! The fourth episode of The Borderlands Show aired earlier today, and with it came trailers, announcements, and good cheer for all. At the top of the episode, hosts Greg Miller and Fran Mirabella of Kinda Funny shared the latest trailer for Borderlands 3: a stop-motion celebration of the season.

CHECK OUT THE TRAILER HERE

Greg and Fran also hosted Stream Team members Tessachka and SchviftyFive for a Let’s Play of Moxxi’s Heist of The Handsome Jackpot, the first campaign expansion for Borderlands 3 that’s due out tomorrow, December 19, on Xbox One, PlayStation 4, and the Epic Games store. This Let’s Play covered never-before-seen areas aboard Handsome Jack’s derelict casino space station, so be sure to catch the footage right here. For more details about the expansion ahead of tomorrow’s launch, check out this helpful blog.

In addition to a special holiday trailer, Borderlands 3 is also getting special holiday discounts! For a limited time, the Standard Edition, Deluxe Edition, and Super Deluxe Edition—which includes access to all four forthcoming campaign add-ons as they are released—will be available for up to 35% off on Xbox One, PlayStation 4, the Epic Games store, and Google Stadia*. Here’s when sales pricing starts and ends on each platform:

The exact timing varies by platform and region, so please check with participating retailers for more details. Terms apply. No rainchecks.

This episode of The Borderlands Show also marked the culmination of our ongoing Give the Gift of Mayhem event, a week of free in-game rewards themed around the holiday season! Greg and Fran shared a SHiFT code that can be redeemed for festive character skins for all four Vault Hunters, provided it’s redeem before 11:59pm PT on January 10, 2020. To catch that code and to learn more about the event, just click right here.