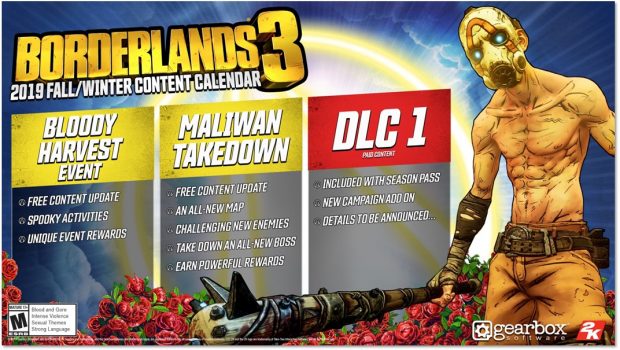 Borderlands 3’s story campaign is big – real big. Like, multiple planets big. But the game only gets bigger once you’ve finished the main missions.Borderlands 3 contains a wealth of endgame content and will enjoy consistent post-launch support; we’re thrilled to finally start sharing those details with you.

During the Gearbox Main Theatre Show at PAX West over the weekend, Gearbox provided new insights into Borderlands 3‘s endgame, including the return of True Vault Hunter Mode, an evolution of Borderlands 2’s Badass Rank mechanic called Guardian Rank, and the introduction of the all new gameplay-changing Mayhem Mode.

When you combine Mayhem Mode, True Vault Hunter Mode, and Guardian Rank progression with the highly replayable Proving Grounds and Circle of Slaughter arenas announced during Gamescom, Borderlands 3‘s endgame coalesces into an engaging loop that grows increasingly rewarding (and challenging) the more you play.

With all these avenues for endgame progression, there’s a wealth of challenging content to best and coveted rewards to chase as soon as you finishBorderlands 3’s story campaign. Below you’ll find a high-level overview of the new modes and features announced today, but for all the details, please refer to this blog.

Even if you somehow manage to conquer every challenge Borderlands 3 throws at you and max out every Vault Hunter class, there’s still plenty moreBorderlands 3 content to come. From Seasonal Events to Takedowns to new missions and cosmetics – and of course, full-fledged Campaign DLC – here’s just a taste of what’s on the horizon:

As if that wasn’t enough, Gearbox also announced that Borderlands 2 VR on PlayStation 4 is getting the Bad Ass Mega Fun (BAMF) DLC pack for freeon September 6, delivering a whopping 16 pieces of DLC content from Borderlands 2. And those of you hoping to experience Borderlands 2 VR on PC won’t have to wait long. Borderlands 2 VR is coming to PC in Spring 2019 and will include the base game and all its DLC in one glorious bundle.