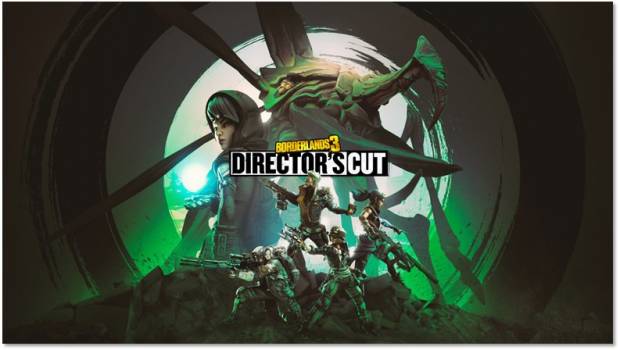 The latest episode of The Borderlands Show was packed with exciting updates and announcements, including news on the upcoming Director’s Cut* add-on for Borderlands® 3, the impending re-release of award-winning adventure title Tales from the Borderlands®, the Disciples of the Vault premium cosmetic packs coming soon to Season Pass 2*, the return of the Broken Hearts Day seasonal event, and special limited-time discounts on select digital editions of Borderlands 3 on PC, Xbox, and PlayStation.**

Director’s Cut launches March 18 and will be available individually or as part of Season Pass 2.The add-on features an enticing variety of content, but the headline act is its brand new raid boss: Hemovorous the Invincible, an absolutely titanic Varkid lurking behind a door on Pandora that’s been locked since Borderlands 3 launched. Only the fiercest big game hunters have a chance of kicking her chitinous butt in the pursuit of top-tier loot. Better consider your tactics, refine your build, and bring some friends. Oh, and be ready to get caked in Varkid guts — it’s going to get messy!

Director’s Cut also includes a series of murder mystery missions, featuring brand new locations and a novel crime scene analysis mechanic. Ava is convinced she has a lead on some potentially supernatural slayings and has decided to document her findings in serialized podcast form. Consider yourself her gun-toting co-host as you investigate strange happenings on Pandora, Promethea, Eden-6, and Nekrotafeyo in search of answers (and loot), with help from some familiar faces. Eagle-eyed Vault Hunters may even uncover teasers, hints, and secrets that tie back to the main story.

In addition, Director’s Cut will give you access to three Vault Cards, which are your ticket to upcoming bundles of themed loot! When you play with a Vault Card active, you can work to level-up the card by completing daily and weekly challenges. There’s a selection of over 100 unique challenges to pull from, so you never know exactly what each day and week may bring. Gain enough progress and you’ll unlock a massive cache of themed cosmetics, plus some supremely powerful gear that scales to your level.

The first of the three Vault Cards, which will launch as part of Director’s Cut, features items that honour some of Borderlands’ most beloved fallen heroes; the remaining two Vault Cards are scheduled to launch by the end of 2021. Vault Card content doesn’t expire, and when multiple Vault Cards are available, you’ll have the option to select which one you want active at any given time.

And finally, the Director’s Cut add-on delivers a treasure trove of never-before-seen behind-the-scenes content. You’ll get a peek into the development of Borderlands 3, from bloopers to cut content, and have access to a gallery showcasing concept art, storyboards, lost maps, and tons of footage that charts the game’s development.

In other exciting news, award-winning narrative-driven adventure game Tales from the Borderlands returns next week after more than a year away from digital storefronts! Set between the events of Borderlands 2 and Borderlands 3, Tales from the Borderlands follows two unreliable narrators on a quest borne of greed but destined for greatness. Your choices shape this tale to be uniquely yours, with plenty of unforeseen consequences ranging from hilarious to heart-wrenching. See the eventual fates of unforgettable characters like Handsome Jack and Scooter in this essential piece of the Borderlands canon. This re-released version consolidates all five original episodes into a single package, which launches on Xbox One, PlayStation 4, and PC on February 17. You can also play the game on your Xbox Series X|S or PlayStation 5 via backwards compatibility.

And that’s not all, Vault Hunters: the free Broken Hearts Day seasonal event returns to Borderlands 3 on February 11. During Broken Hearts Day, you’ll see hearts hovering around lovesick enemies in all corners of the galaxy. Shooting a heart triggers one of several unique effects; shoot enough hearts and you’ll unlock special themed rewards. There are five total items to collect, including recolours of last year’s cosmetic rewards and two Legendary weapons that can only be unlocked during this event. If you missed ’em last year, don’t miss ’em again now. Broken Hearts Day runs until February 25.

Borderlands 3 is available now on Xbox One, Xbox Series X|S, PlayStation 4, PlayStation 5, Stadia, and PC via Steam and the Epic Games Store.