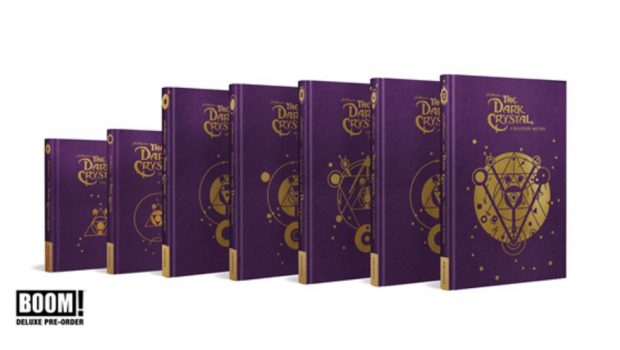 In 1982, visionary filmmaker Jim Henson ushered in a new milestone in fantasy with THE DARK CRYSTAL – a visually stunning tale of heroism, and good versus evil in the creature-filled world of Thra. More than 20 years later, that legend began anew when Archaia, the multiple Eisner Award-winning imprint of acclaimed comic book publisher, BOOM! Studios, returned to Henson’s realm for a series of all-new comic book and graphic novel collaborations that would expand, explore, and further enrich the wonderous world and characters first introduced in the original film.

Now, in conjunction with the 40th anniversary of the original film’s release, Archaia is proud to present THE DARK CRYSTAL 40th ANNIVERSARY LIBRARY – presenting, for the first time, the complete corpus of BOOM!/Archaia’s DARK CRYSTAL comics and graphic novels in one stunning, seven-volume collection, available exclusively on Kickstarter as part of the latest BOOM! DELUXE PRE-ORDER initiative.

Currently live on Kickstarter, any backers who pre-order more than $100 worth of goods in the campaign’s first 24 hours (through 9 am ET tomorrow, October 26th) will also be rewarded with an exclusive Dark Crystal 40th Anniversary enamel pin as a launch day bonus. Visit the BOOM! DELUXE PRE-ORDER campaign’s homepage for more information on Stretch Goals, Add-On bonus products, and other surprises to be revealed before the initiative comes to a conclusion on November 14, 2022.

Immediately before the campaign’s close, The Jim Henson Company and Thames Con will also be hosting The Great Con-Junction live in Los Angeles from November 12-13, 2022 – an official, two-day Dark Crystal convention, held in honor of the film’s 40th Anniversary at the Hilton Universal City and including a celebratory party at The Jim Henson Company’s historic lot. Visit TheGreatConjunction.com for more details.

For continuing news on more from BOOM! Studios, stay tuned to boom-studios.com and follow @boomstudios on Twitter.