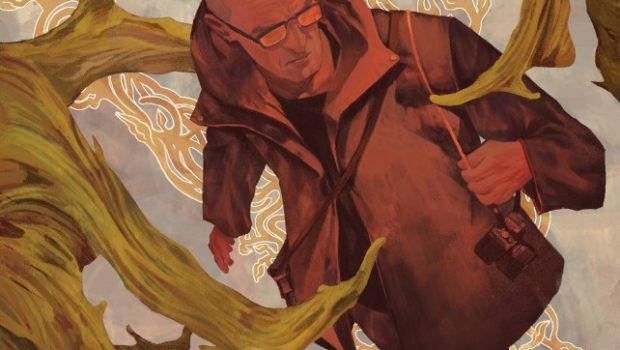 In a drab, colorless world, the seasons bring change. 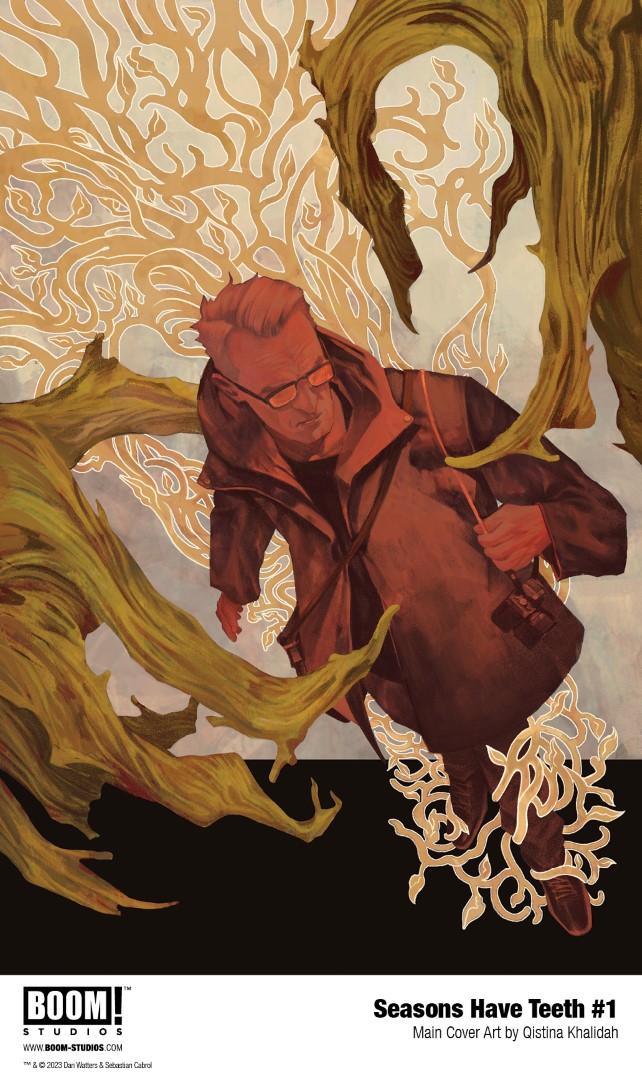 Andrew, a retired conflict photographer, lives a life steeped in regret, pain, and sorrow. When the seasons arrive–each one embodied as powerful god-like creatures–everything for Andrew begins to change. As he risks everything to track down Spring, Summer, Autumn, and Winter, he can’t help but hope that capturing the perfect picture of each will help him find his redemption…and maybe–just maybe–bring color back to his world.

Dan Watters is a writer from London, and the co-creator of titles such as Coffin Bound, Limbo, and Home Sick Pilots at Image Comics. He has also written Sword of Azrael, Arkham City: The Order of the World, and Lucifer at DC Comics, and the Cowboy Bebop series at Titan Comics. You can find him on social media at @danpgwatters.

“I’m overjoyed to be writing this book for Sebastián,” says series writer, Dan Watters. “From the dark depths of winter to the joys of summer, he brings such wonderful nuance to both human emotion and monsters—and in The Seasons Have Teeth we are bringing you both in abundance.”

Sebastián Cabrol is a comic artist and illustrator from Argentina. He’s done work for publishers such as Marvel, Dark Horse, and Wizards of the Coast, among several others. You can find Sebastián on Instagram at @seba_cabrol.

“Dan has created an incredible landscape filled with both mystical and earthly creatures,” series artist Sebastián Cabrol says. “It’s a unique take on something so marvelous as the idea of wild and sentient seasons. As an artist I’m having a great time exploring this world.”

“The world Dan and Sebastián managed to create is astounding in its ambition. I’ve never seen anything like it before, and I can’t wait for readers to share in the joys and horrors of The Seasons Have Teeth.” said Shantel LaRocque, Editor, BOOM! Studios.

THE SEASONS HAVE TEETH is the newest release from BOOM! Studios’ eponymous imprint, home to critically acclaimed original series, including BRZRKR by Keanu Reeves, Matt Kindt, and Ron Garney; Something is Killing the Children by James Tynion IV and Werther Dell’Edera; Once & Future by Kieron Gillen and Dan Mora; Eve by Victor LaValle and Jo Mi-Gyeong; The Many Deaths of Laila Starr by Ram V and Filipe Andrade; Wynd by James Tynion IV and Michael Dialynas; Grim by Stephanie Phillips and Flaviano; Briar by Christopher Cantwell and Germán García; Stuff of Nightmares by R.L. Stine and A.L. Kaplan; The Approach by Jeremy Haun, Jason A. Hurley, and Jesus Hervas; Damn Them All by Simon Spurrier and Charlie Adlard; Behold, Behemoth by Tate Brombal and Nick Robles; Specs by David M. Booher and Chris Shehan; Once Upon a Time at the End of the World by Jason Aaron, Alexandre Tefenkgi, Leila del Duca, and Nick Dragotta; Know Your Station by Sarah Gailey and Liana Kangas; A Vicious Circle by Mattson Tomlin and Lee Bermejo; Mosely by Rob Guillory and Sam Lotfi; and the upcoming Harrower by Justin Jordan and Brahm Revel; and The Neighbors by Jude Ellison S. Doyle and Letizia Cadonici. The imprint also publishes popular licensed properties, including Dune: House Harkonnen from Brian Herbert, Kevin J. Anderson, and Michael Shelfer; Mighty Morphin Power Rangers from Melissa Flores and Simona Di Gianfelice; and Magic from Jed McKay, Rich Douek, and Ig Guara.

THE SEASONS HAVE TEETH #1 will be in comic shops in April 2023. It is available for pre-order at your local comic shop or at the BOOM! Studios webstore. Digital copies can be purchased from content providers, including comiXology, iBooks, Google Play, and Kindle.

For continuing news on THE SEASONS HAVE TEETH and more from BOOM! Studios, stay tuned to boom-studios.com and follow @boomstudios on Twitter.