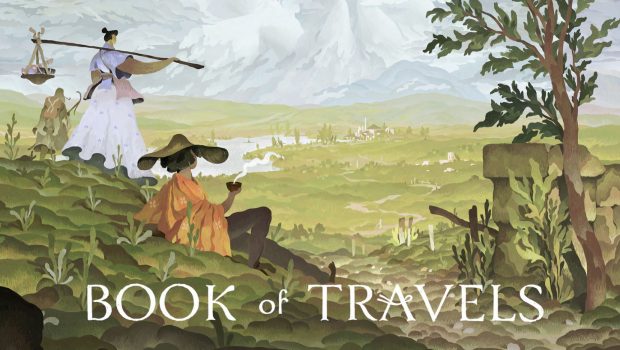 Summary: Book of Travels looks beautiful, and the world is intriguing. Sadly, at the moment, there is too little reward for your wanderings.

Early Access Games remain a contentious issue in the gaming community. Discussing the pros and cons on both sides warrants a lengthy article in itself, so I won’t be diving into that here. From a reviewer’s perspective, assessing EAGs can be a challenge. To be fair to the developer, you have to imagine a game’s potential. On the other hand, you need to make it clear exactly what a player will be getting for their money. Weighing up the two can be tricky.

With that said, let’s turn to Book of Travels, from Swedish developers, Might and Delight, which launches in its Early Access incarnation this October 11th for PC and Mac. The game is described as a “Tiny Multiplayer Online Role-Playing Game,” with the number of players on each server limited in order to make “each meeting memorable when players cross paths.” It’s an intriguing idea. So how does the gameplay stack up? 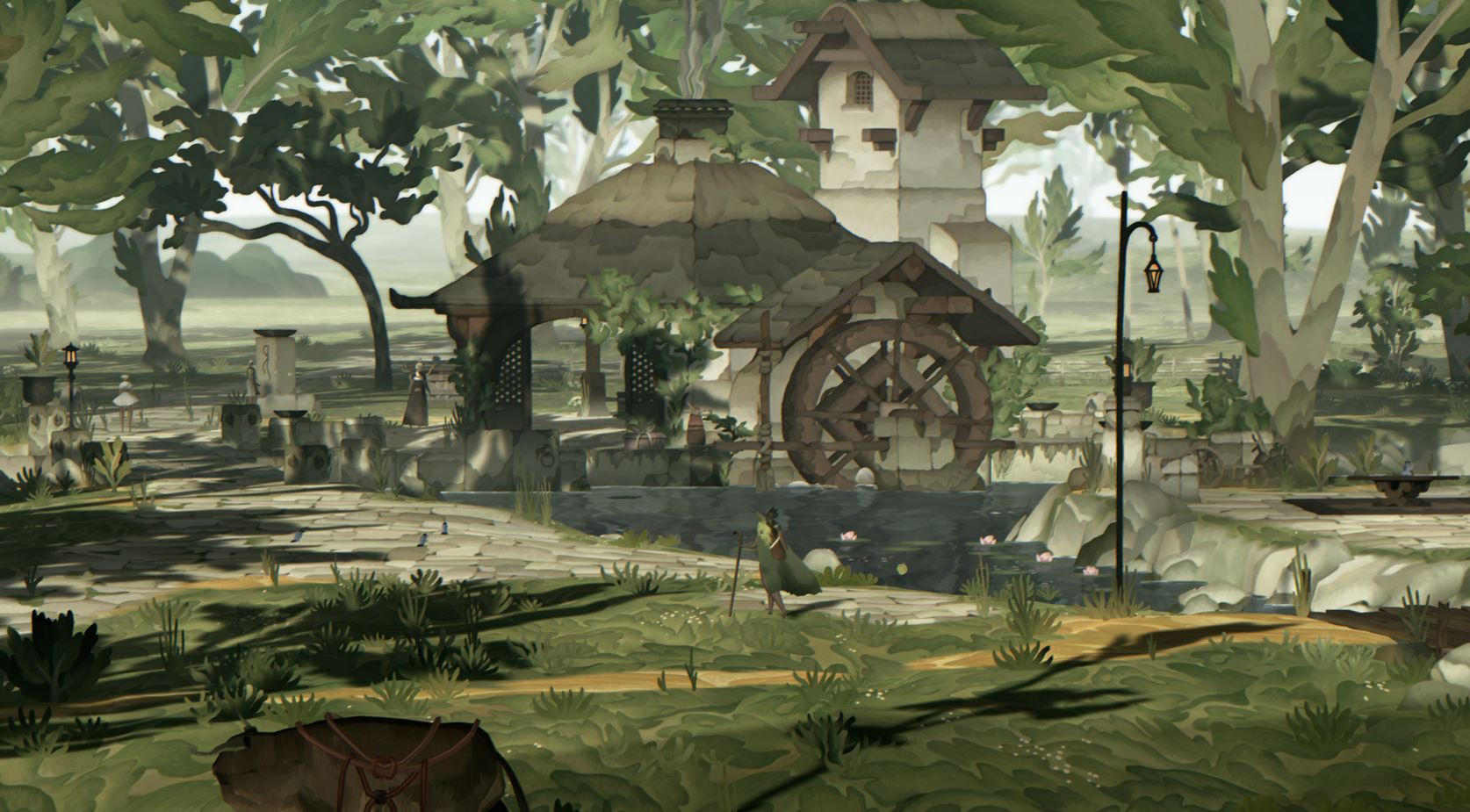 You start by creating a character, building from a selection of archetypes, each of which bears an intriguing title such as ‘the enfolder,’ the ‘larker’ and ‘the ribboned.’ There are twelve to choose from, with varying talents and short descriptions. You then get to choose your age, gender, upbringing (poor, religious, urban, etc) and, charmingly, are invited to write your own brief backstory.

Following a basic selection of skills and talents, it’s on to appearance which, for Book of Travels, consists of choosing an eye-colour (which adds a different personality trait) and rolling for random starting equipment. Your character’s first and last names, also, are randomly assigned, although you can re-roll theses as often as you wish. Those familiar with tabletop RPGs will feel at home here, and appreciate the little details which the developers have added in.

Visually, Book of Travels displays a lot of charm and invention, taking an almost water-colour approach. It does a good job of conveying a storybook atmosphere, with a dynamic day-and-night cycle. You are presented with a view similar to that of many point-and-click adventure games. Your character is a small figure in the landscape, a finger’s-breadth tall. Moving is a simple matter of clicking on the desired spot to walk or run. Your character can move in and out of the frame, along paths, but there are borders. This is not an open world. The landscape scrolls with you and adjoining sectors are accessed by reaching the edge and clicking on a compass direction. Objects which can be examined display an ‘eye’ icon. Likewise, those which can be gathered display a ‘hand.’ 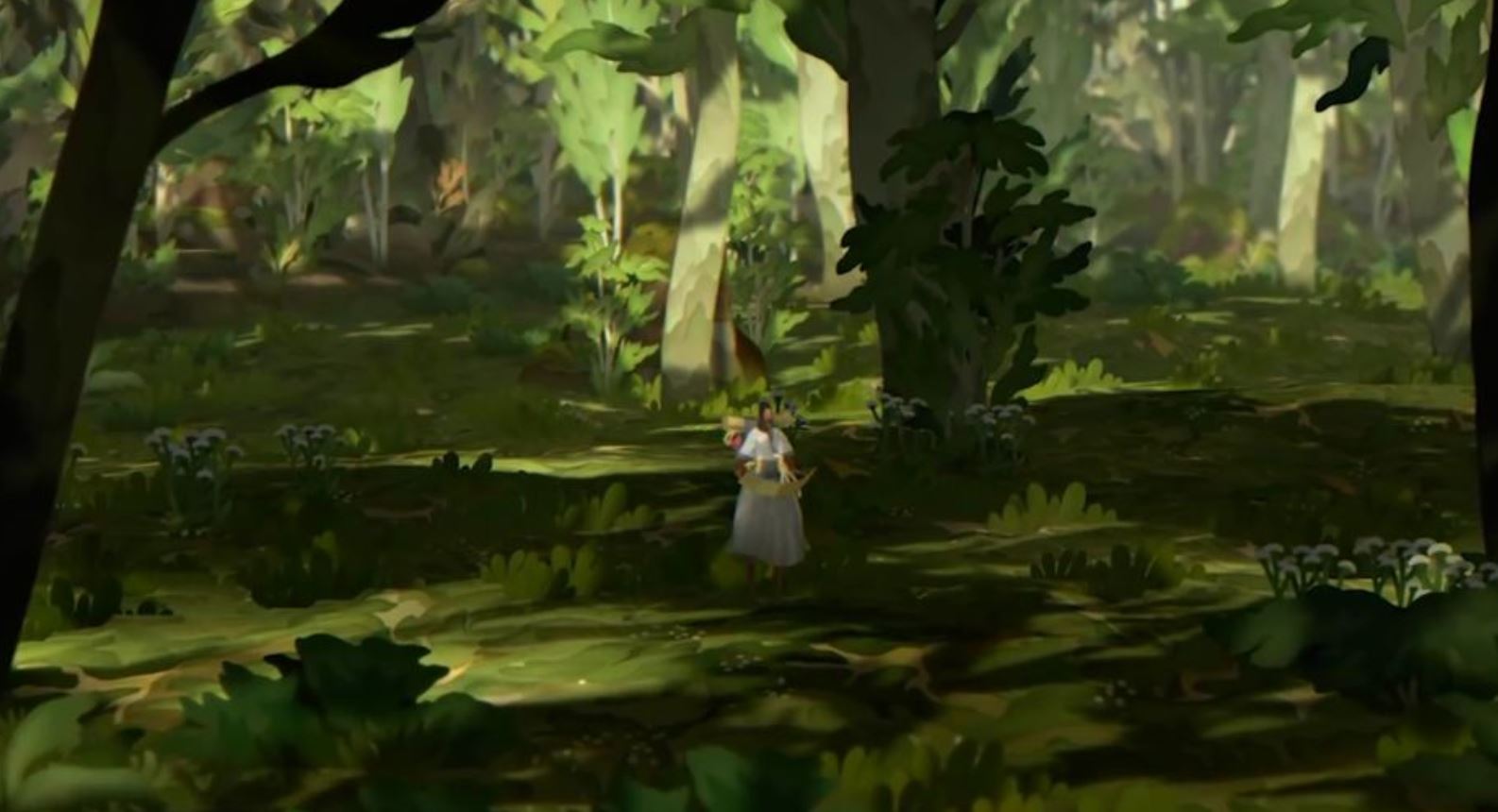 Book of Travel’s backdrop is a curious mix of medieval and steam-age, with train tracks and farmers, hunters, peasants and talk of ‘spectres.’ You will meet plenty of NPCs as you wonder about, some of whom you can converse with, by way of speech bubbles, although this is simply a matter of reading what they have to say – there are no options to speak yourself, which would have added much.

In my play-through I happily strolled around, picking up plants and looking at rocks. Eventually I met a kind old lady, who directed me to the nearest tea house. On the way I came across a trader, but I had nothing worth trading (trading is a clever balancing act, where you are able to stack low-value items into an enticing offer.)  At the train station I found a fire to sit by and dry out, removing my ‘wet’ penalty. Before I could locate the tea-house, however, a server error forced me out of the game.

There are survival elements – your character needs to rest and recuperate, although there is no sense of urgency. The plants and varied items found scattered about serve as alchemical ingredients for various spells and abilities, which you must learn upon the way (although I didn’t journey far enough into the game to work out exactly how this is achieved). 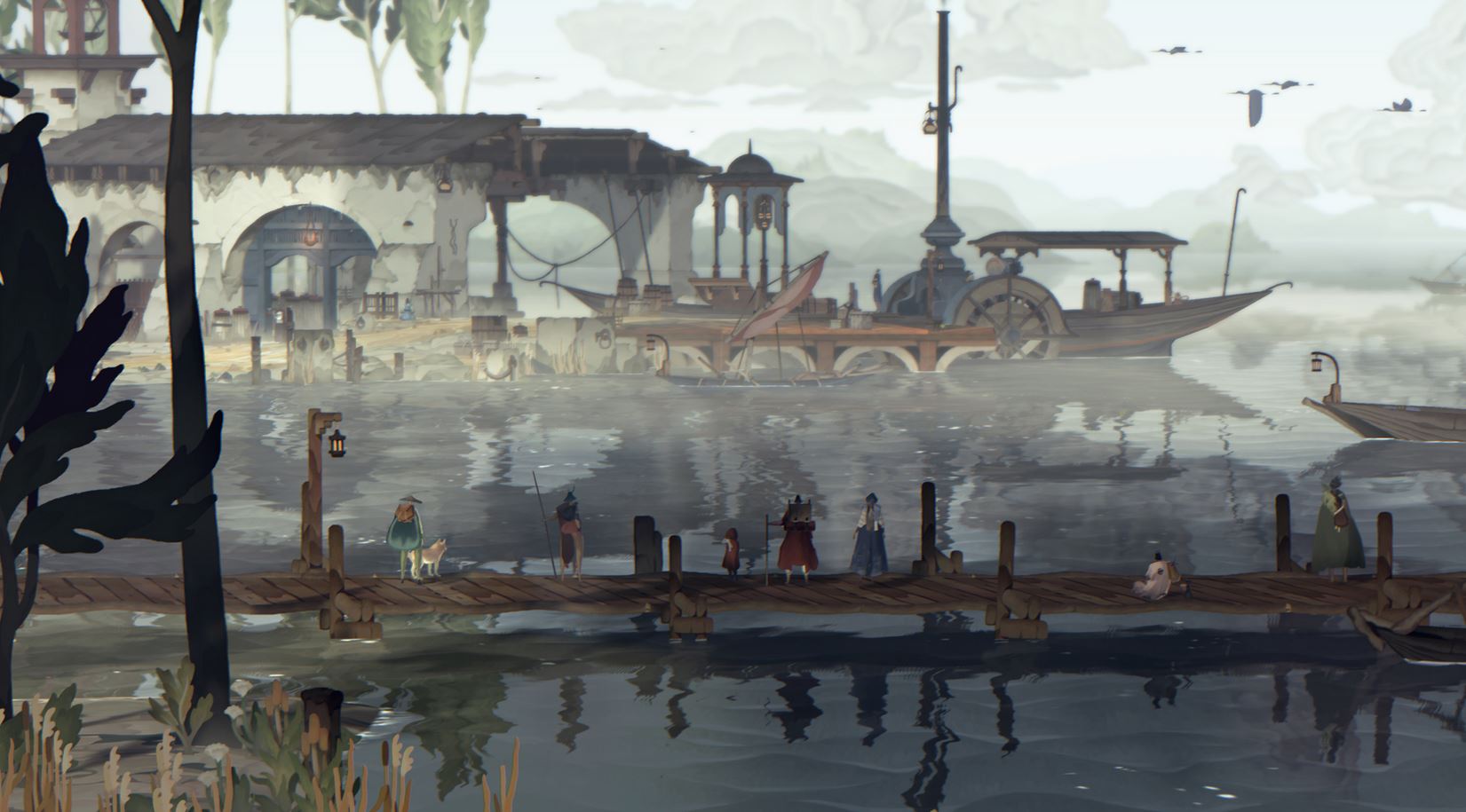 Combat is present, and I did get the chance to practice against a ‘friendly road warden’. Options appear to be limited to ‘attack’ or ‘flee.’ Unfortunately I can’t comment further, as once again the game crashed.  Apparently there is more to do . According to the developers, you can ride the trains and boats, fish and explore dungeons. Certain NPCs come with mini-quests attached, yet I never discovered any. In all honesty, my few hours gameplay weren’t inspiring enough to encourage me to venture further.

I just didn’t feel that ‘what’s over that hill’ compulsion which is vital for a game such as this. Crucially, I did not meet any human players. Not entirely unexpected at this stage, and a little interaction would certainly add appeal, although I don’t see how, in its present form, you could undertake a truly co-operative adventure. Beyond collecting items which you find, there simply didn’t seem to be much to do. 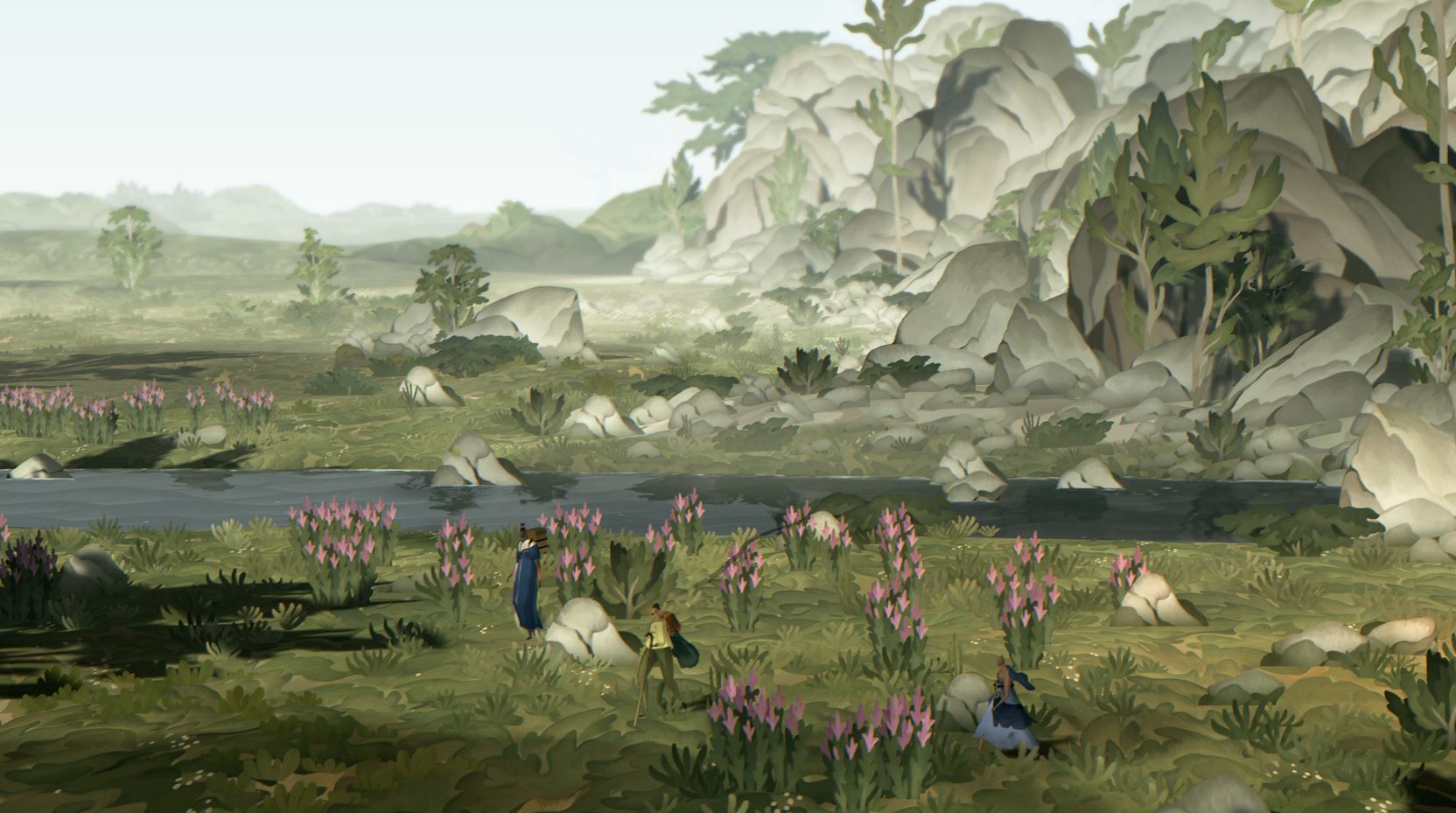 In summary, I really wanted to like Book of Travels – it has a lovely atmosphere, a well-thought-out mythology and a genuinely original style. You certainly get the feel that the developers have a sincere love for the world they have created. Unfortunately, it all felt a little empty. My character did plenty of walking without stumbling across anything of real interest. Most frustratingly, it’s hard to see how the character creation process alters a player’s experience of the game in any meaningful way.

Might it turn into something great? The potential is there, but in my personal opinion a lot more content would need to be added.