Summary: Bomberman finds a new home on the Nintendo Switch which is the perfect place to blow things up!

Bomberman returns to the world of gaming and what better to come back then on the brand new Nintendo Switch Console. Developed by Konami, Bomberman R revisits this classic franchise with ‘photo-real graphics’, without diverting too much from what made this series great all those many years ago. It’s all about tactics, bombs and blowing things up in order to make your way through the world of Bomberman… and of course, try not to blow yourself up! Bomberman R has three different difficulty levels, so whether you’re a newcomer or a seasoned gaming pro, the game can be tailored to your skills. On the hardest difficulty setting, the game really gives you a run for your money and even a touch of Joy-Con rage! 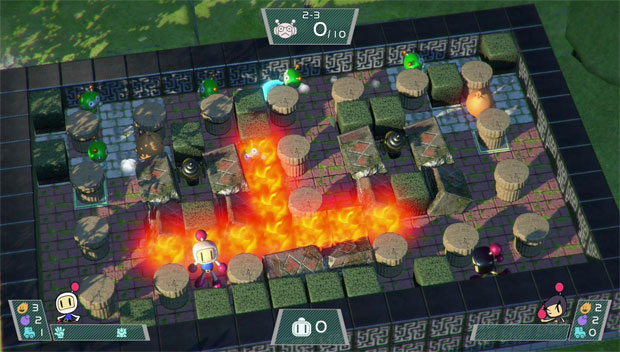 Needless to say, there’s quite a few different strategies to employ in the game, including various power-ups and items to help make your way through the various gaming modes. If you haven’t played Bomberman before, it’s quite an easy premise as you drop bombs on the maze like grid in order to destroy enemies/obstructions and search for power-ups and additional items.  As you progress, your little bomber becomes more and more powerful in terms of what they can destroy. Sometimes the whole screen is one huge explosion as you can drop multiple bombs. 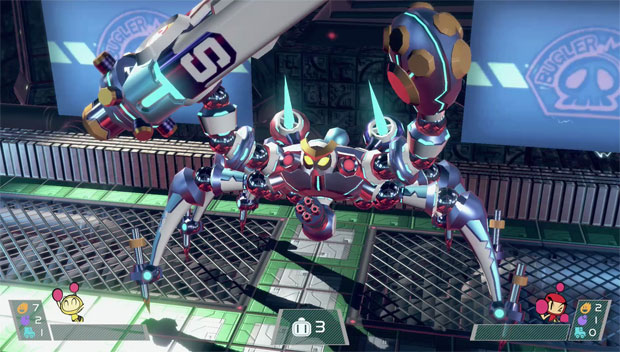 Although there is a story behind Bomberman R, it’s a little on the dull side but the cartoon cut scenes help inform the player with what is going on as you make your way through the similar 50+ levels in order to defeat the villain. I also like how this instalment of Bomberman is more 3D and even features different in-game levels as you go up ramps and search for other hidden treasures. The story mode can also be played solo or with another player which makes for some interesting team work and is much better with a friend. For most gamers, you can knock over the story mode in just a few hours but it is open for some replay such as trying to beat your high score or playing with a different friend. 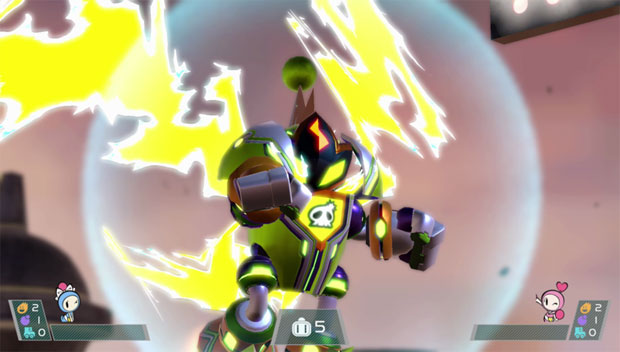 In terms of single-player versus multiplayer, the gaming dynamics are very similar with all the ‘bomb’ use but there are interactive elements in the levels such as switches, magnets, ramps and other small puzzles which need to be solved before moving on, all while the enemy is gunning for you. Add in some relatively challenging boss battles and there’s quite a bit happening in this arcade game. So as you kick bombs, throw bombs, receive power-ups and increase your abilities, Bomberman R definitely screams retro. If you do die, you can use some of the gems collected in the game to come back in and after each level you’re ranked with stars on how well you performed. The only downside to the game is that it does become repetitive, so shorter games (solo) are better.

However where Bomberman R shines is through the multiplayer component which even allows up to four players to use via the tabletop mode or eight players via the TV mode. There’s even the ability to play online which does add to the longevity of this game. When playing with other gamers, it really changes your strategy because you’re not just playing with AI anymore. So the more players, the more chaotic things become as everyone is trying to take out their friend which can create some massive on screen explosions. Needless to say, playing multiplayer brought back some fond memories of playing LAN games back at university and Bomberman was one of those games. 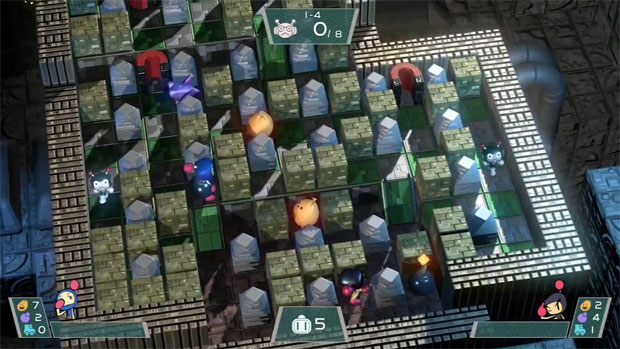 So where does Bomberman R fit in the grand world of schemes? In terms of maximising the capabilities of the Nintendo Switch, this game really doesn’t do that or add anything to the world of gaming. It is an old school game and the fun is to be found in multiplayer. Given the limited number of launch titles for the Switch and the cost of the game, it is a little on the expensive side to play a retro game. On that note, I did enjoy my time with Bomberman R, particularly with other players but I don’t think I’ll be coming back to this game that often. Nonetheless, it’s a fun title in small doses and really channels its 16-bit origin, especially with the graphics, snazzy effects, fun voice acting and crazy sound effects. 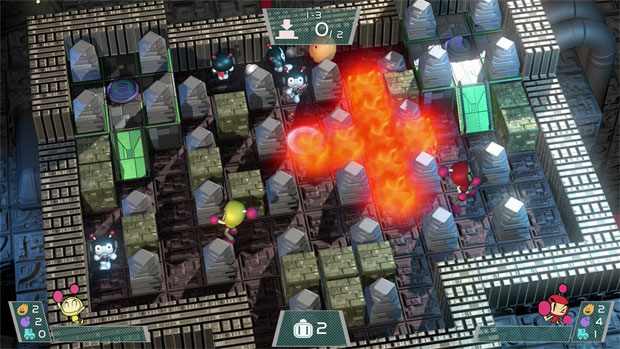 It’s been awhile since a Bomberman game has graced a Nintendo console and it’s good to see the franchise make a comeback, even if it stays a little too true to its original format. However if you’re looking for a solo-experience, I would recommend another title but if you’re looking for some multiplayer fun for local or online play, Bomberman R delivers on that front and is a great way to spend an hour or so blowing your friends, family and colleagues to smithereens.