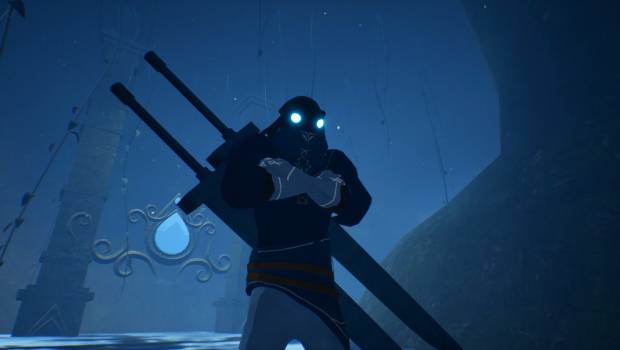 Smart developers know why good games work. They study the classics, learn the strengths of game design, and expand upon them to create something stronger. It is obvious the developers at ROBI Studios understand what makes an impressive game, and their expert craftmanship is on full display in their newest title, Blue Fire. Combining the best aspects of 2D/3D platformers and action-adventure games, Blue Fire captures something magical, both in its challenging gameplay, and mysteriously lush world. 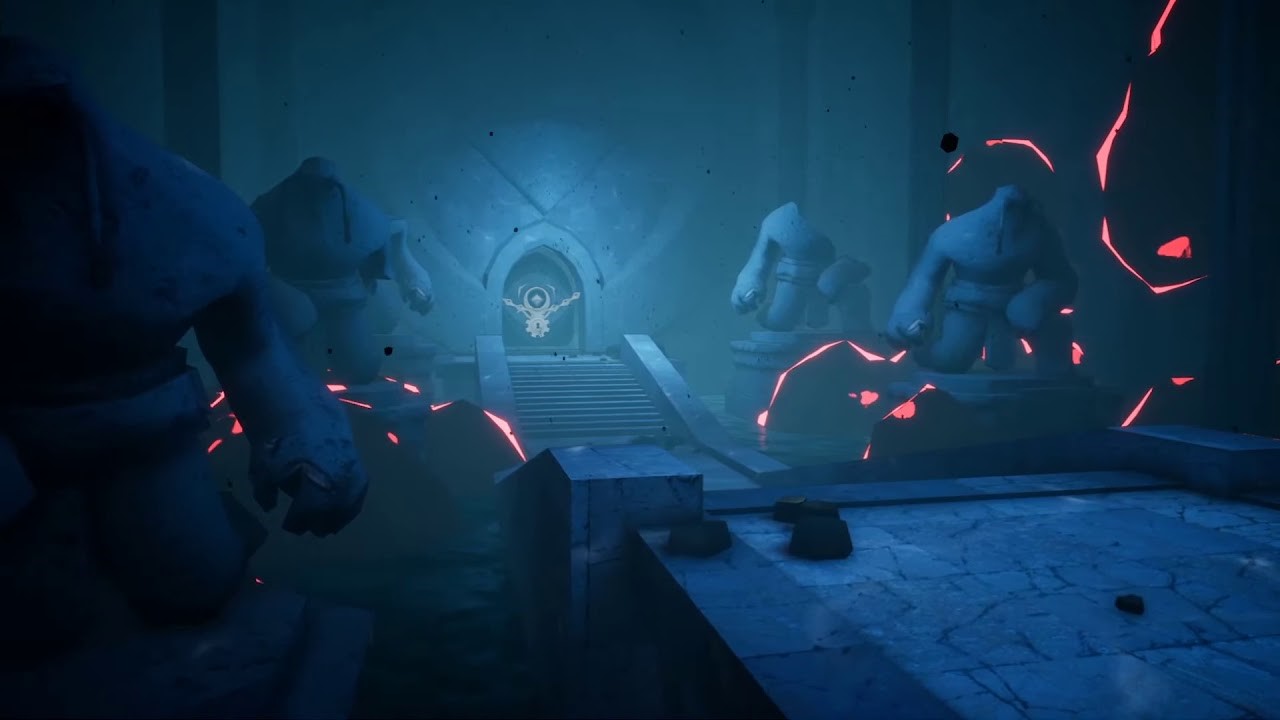 Blue Fire transports you to the castle of Penumbra; a decrepit landscape overrun by darkness. Your voyage will see you winding through treacherous platforming, completing puzzles in dungeons, and fighting against some aggressively quick bosses. Blue Fire’s presentation is gorgeous. Drawing inspiration from The Legend of Zelda: The Wind Waker, cell shaded graphics are warm, vibrant, and ensures the game will age beautifully. The world of Penumbra is joy to explore. The inner workings of the castle range from winding corridors and underground sewers, to sprawling towers of ice and vibrant ivy coated towns. Character design is simple, but affective, as I found myself chuckling at the dialogue (there is a character that is extremely passionate about elevators). Aside from the relatively brief twelve-hour campaign that I wish was a bit longer, this game feels far more like first party release, rather than an indie game.

While the art style is what sparked my interest in Blue Fire, gameplay is equally outstanding. Merging the jumping and dashing of 2D platformers such as Celeste, and the combat and exploration of almost every 3D Zelda, the core gameplay is implemented splendidly. Blue Fire’s heart is its strong platforming, and it is interwoven into every aspect of gameplay. Take the voids, for example. These other worldly realms pit you against treacherous platforming, and you will have to jump, dash, and wall climb your way to the goal. The challenge is great, but the reward is well worth it: an extra health bar. These platforming challenges extend outside of the void areas as well. Dungeons, while including some puzzle solving elements, focus more on platforming. The overworld is riddled with platforms and springing from one region to the next feels incredibly fluid. Progression for powering up your character is succinct and satisfying. Defeat enemies to expand your stamina bar, find hidden chests to get stronger swords for combat, and most importantly, complete side quests to unlock spirits. Spirits are customizable abilities that range from increased attack distance and movement speed, to stronger mid-air attacks and bulkier shields. My favorite of these was increased dash distance, which made previously risky jumps far less heart wrenching. When combined with the double jump and high jump abilities, it feels as though you are flying across the map. You can also receive different tunics for your character, but I wish they were equipped with special abilities rather than just spicing up your wardrobe. 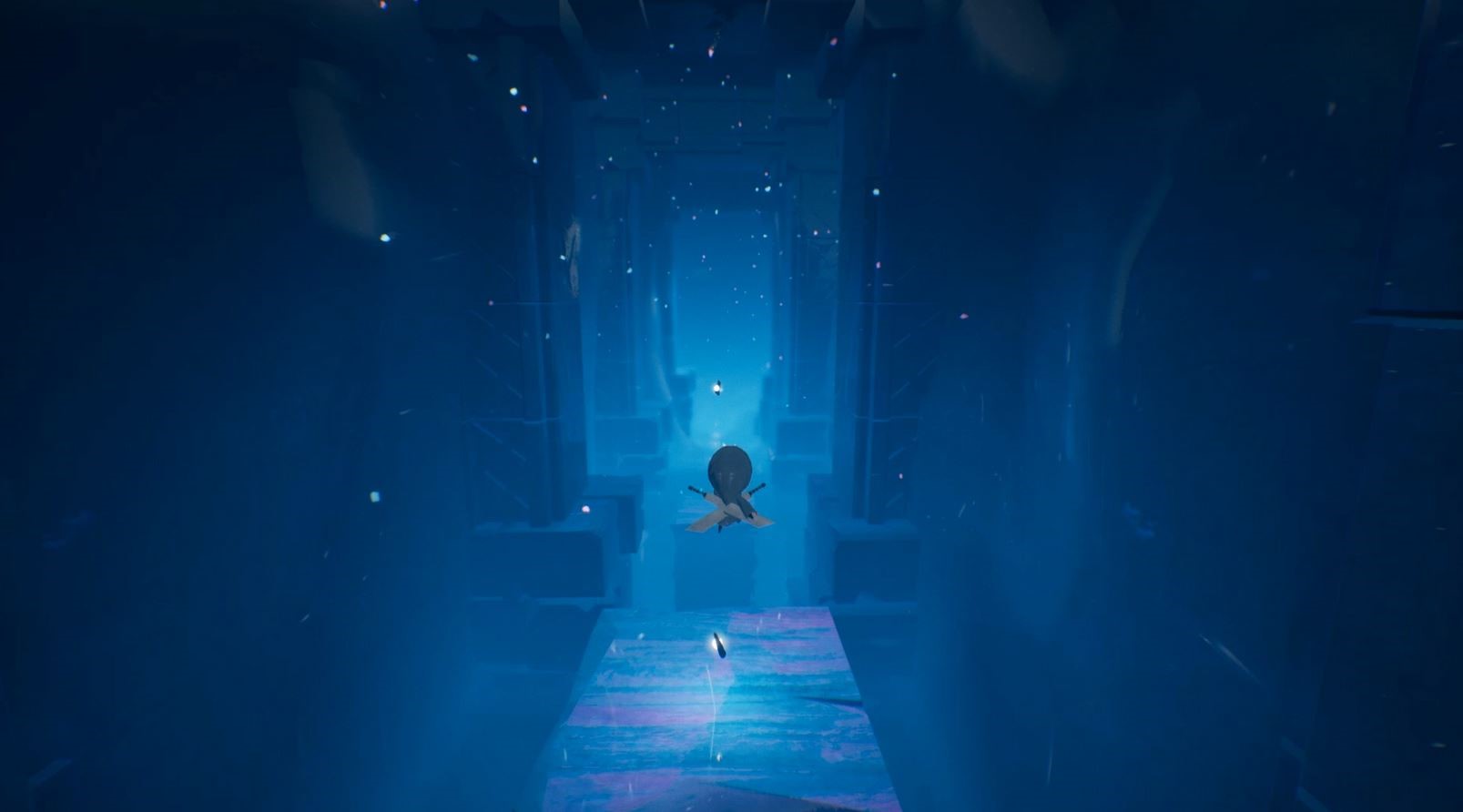 The one qualm I have about the journey itself is at its halfway point Blue Fire abandons its Zelda like dungeon structure and turns to fetch quests and backtracking to unlock a series of bosses. With only two dungeons, both of which are nicely fleshed out, the race to the end of the game felt hurried and abrupt.

Combat is not as fleshed out as platforming but still enjoyable. Most enemy encounters involve dodging attacks before waiting for an opening to dash in and perform a series of sword swipes. Enemies in the later levels grow increasingly aggressive or deplete large amounts of hit points with one shot. However, enemy variety is somewhat limited, so unless you are fighting multiple foes at once, combat can grow a bit stale after a while. Boss battles, while exciting and challenging, are bombastic in scale, but similarly conventional in execution. Most involve simply dodging attacks until you find your opening to counterstrike. Additionally, there is a mana bar which regulates your shield and ranged attack, but I found both these abilities to be of little use. The shield prevents taking damage but doesn’t stop knockback, which commonly ends in falling to your death. And the ranged attack is useful in certain scenarios, but not strong enough to inflict significant damage before running out of stamina. Overall, enemies feel less like foes you are required to vanquish, but rather obstacles attempting to impede your progress. 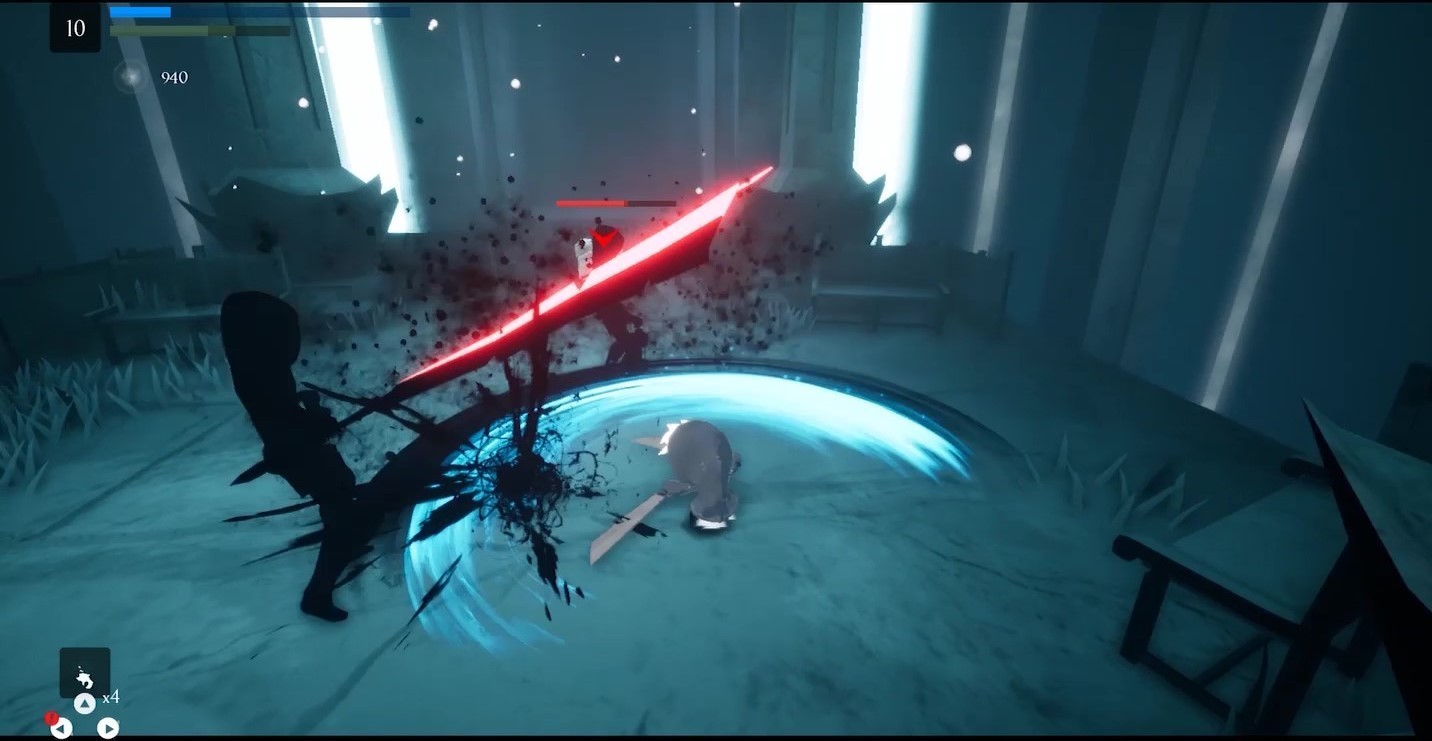 A fair warning to newer gamers: this game’s platforming is quite difficult, but that’s not necessarily a bad thing. While the early levels are approachable, some of the late game platforming requires the most precision I’ve ever needed in a 3D platformer. But while I may have been frustrated at times, I always felt I was learning from my mistakes so my next attempt to cross a perilous gap would be more successful. 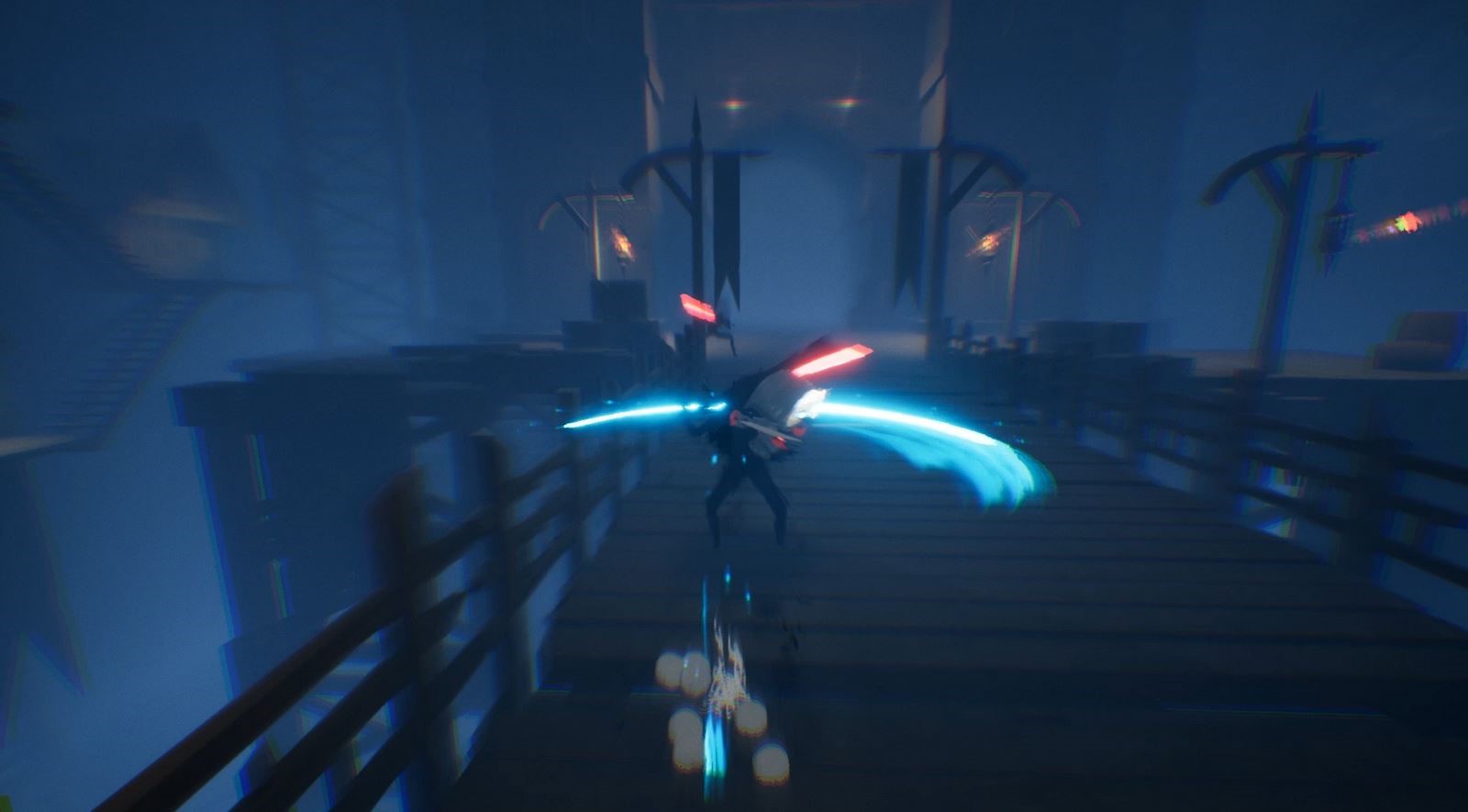 As beautiful as Blue Fire is, there are a wealth of glitches. Some are insignificant, such as loading screens being discombobulated entering and exiting voids. Others are severe, such as the game occasionally crashing when entering a different area of the map. I had to intentionally kill myself multiple times because the game thought I was falling from a high distance whenever I jumped, or, more demoralizing, in the first dungeon because a change in water level was not registered. And as lovely and atmospheric the game’s music is, it was not uncommon for it to simply stop altogether. I have no doubt these glitches will be fixed but be weary of them on release day.

Overall, these impairments do not prevent Blue Fire from being a tremendously satisfying experience. Regardless of how tough the platforming can be, I savored every moment in this world. Even after dying dozens of times, I was still motivated to progress to see what new kinds of wonders awaited me if I could just make it to the next platform. The amount of mystery, content, and challenge ROBI Studios packs into a $20 package is quite impressive and left me hungry for more even after the game’s conclusion. Blue Fire emulates the successes of definitive 2D and 3D games and is perfect for anyone with an appetite for a stimulating platformer or action-adventure complete with a gorgeous and enthralling world to explore. 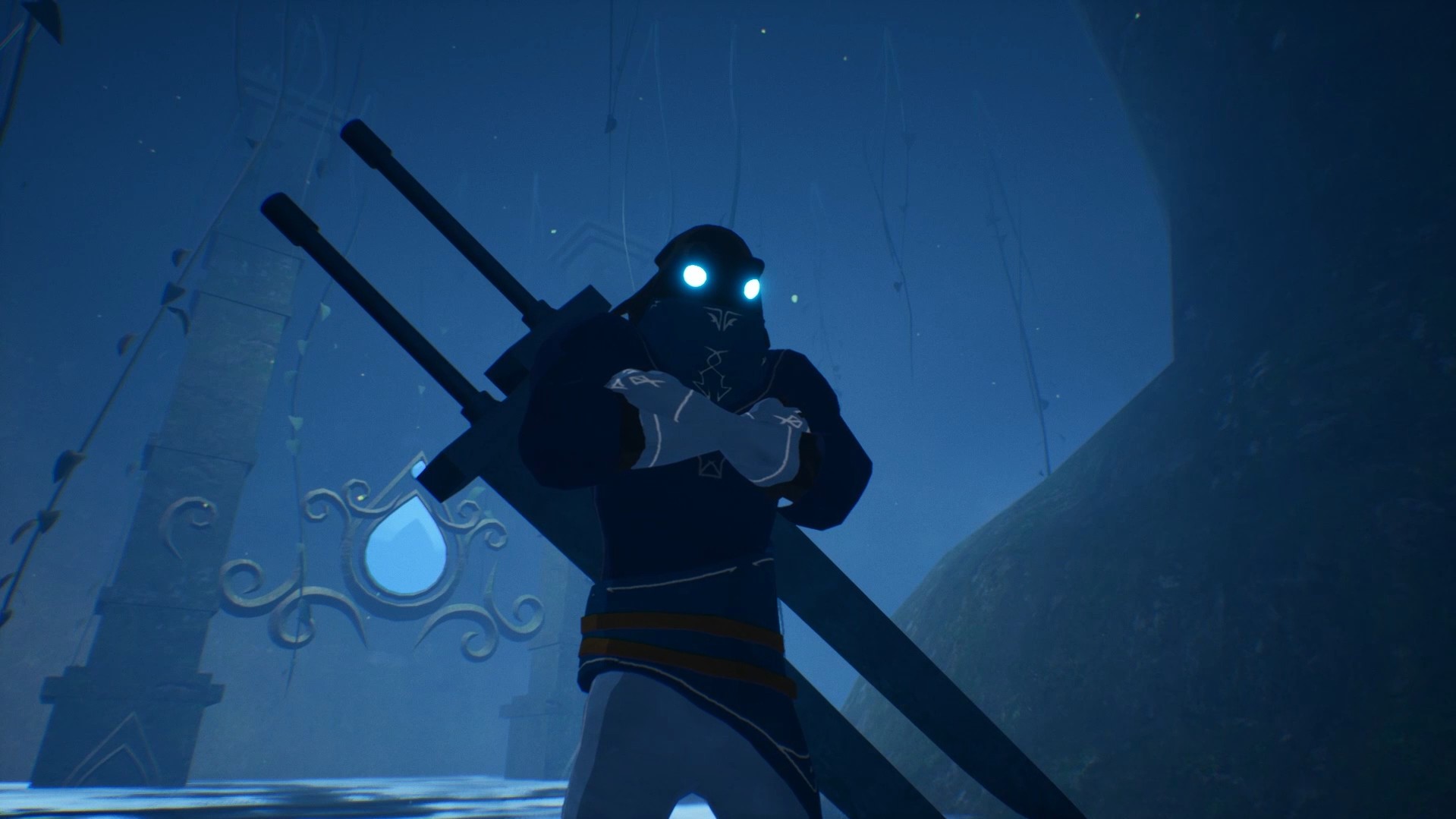