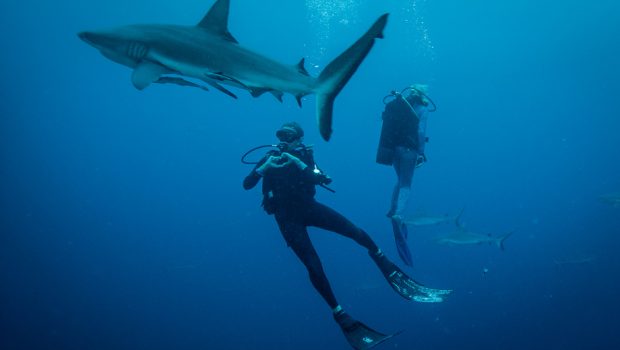 With its devastating imagery, brisk run-time and clear information, Blue is an ambitious Australian documentary that pulls no punches in its brutal illustration of the state of the ocean and its marine life. Following some gorgeous overhead shots of the sea, the ocean is described as “an illusion of abundance” and that “the fish population is in decline all around the world”. The damning environmental information is courtesy of director Karina Holden, a conservation biologist and who has also worked in television since the mid-1990s for the ABC Natural History Unit. Since then, she has become well-versed with the documentary format after having developed a number of different series in both Asia and Australia about science and wildlife.

Her new film widely explores several branches of oceanic pollution and oppression. Blue is foremost an attack on industrialisation and the way that scale fishing is polluting and murdering the oceanic sea life. The fishing industry is a powerful economic juggernaut throughout Australia, Indonesia, Hawaii and the Philippines, but one that is seeing “the very nature of the sea being altered”, we’re told. The fishing trade in Indonesia for example is a pivotal economic staple where the livelihood of an entire village hinges on people being able to catch, kill and then sell fish to survive. The film is balanced in interviewing some of the fishermen, who stress how the trips are growing longer with less sharks to catch, and asking what will happen to these villages when there are no longer any fish. 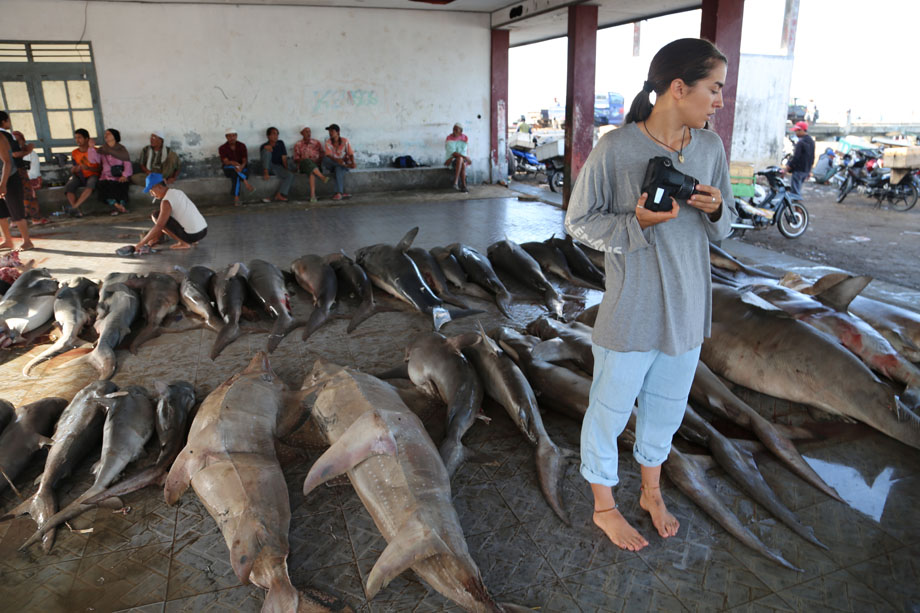 While the changing nature of the environment creates major economic concerns, nothing dispels the heinously barbaric ways that fish and sharks are handled by the villagers. The film’s most upsetting and alarming sequence is when Karina Holden, her camera crew and Madison Stewart (a young conservationist) shoot and photograph the Indonesians as they drag the carcasses of the sharks from their boats up on to the piers and then cut off their fins with a machete. The air in this fishing village is described as “a heady aroma of decay”. Stewart’s voice-over says that these people do not even like the taste of shark, which means that their bodies are thrown back into the water, leaving only the fins to be sold off. What a horribly depressing waste of life. There’s a startlingly bleak clarity to the images of death that haunts this film. For example, it’s terrible watching a group of seals bouncing under the water together, only for the film to juxtapose the image with one where their lifeless bodies are tangled up inside sea nets. 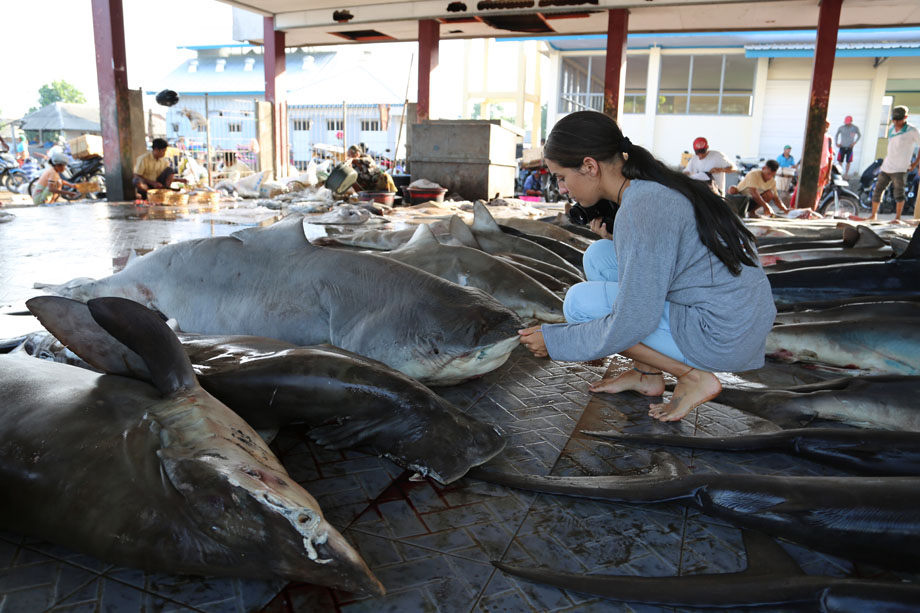 Blue is also a strong assault on mass production of plasticity, addressing how the high volume of plastic in our lives becomes a major ocean pollutant and how this has a devastating effect on marine life. We’re told that in two decades there will be more plastic in the ocean than fish. One of the film’s best sequences is photographed in a close-up shot where we see Jennifer Lavers, a marine eco-toxicologist, place a tube inside the mouth of a seabird, forcing it to cough up the content of its stomach. What emerges from its beak is an entire tray full of plastic pieces that it swallowed from the ocean water. Some of the pieces are so big that Lavers can feel them by touching the outside of the seabird’s stomach. This sequence is remarkable because the intimate and uninterrupted filmic style provides a first-hand account of how our product and commercial choices impacts sea life. 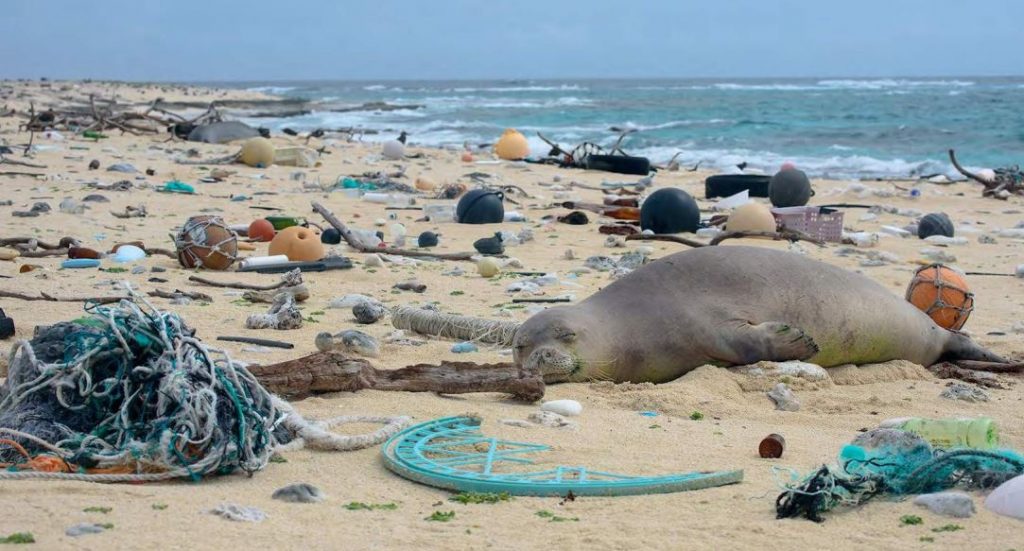 Blue’s best asset is how seamlessly the documentary addresses a wide number of topics and locations in its short running time of just seventy-five minutes. It makes some large and damaging statements, including one from a senior diver who declares that the ocean she sees today is not the one from fifty years ago because of the diversity of fish has been killed. Contrastingly, there is also a funny gag shot in the film where a person eats a plastic bag to show the domination of the material in our lives. As an environmental study, it’s strange that the film never uses the phrase “climate change”. Industrialisation is a huge staple of climate change because of how machinery, processing and giant nets disrupt the environment and result in major environmental consequences. Late in the film, there are at least references to the changing water temperatures, perhaps showing that climate change is still addressable without using the actual terminology.

Since this film received government funding—it was developed by Screen Australia—perhaps some closed-minded bureaucrats insisted that the phrase not be used. In recent times where we’ve seen the wrath of climate change across the world, through Hurricane Irma and other natural disasters, the omission is notable. Hurricanes specifically result from warming sea temperatures and people are personally responsible for altering the state of the ocean through plastics and industrialisation—climate change is thereby a man-made problem. Yet as specified by Blue, environmental repercussions are addressable through human action such as sanctuaries, limiting plastics and refuges for marine life. Our personal agency in the environment only stresses the importance of using the proven scientific language. If one can correctly identify the problem, it can be resolved. No delay is feasible and there are no second chances. For this generation and the next, climate change’s impacts are immediately frightening and real.

Summary: With its devastating imagery, brisk run-time and clear information, Blue is an ambitious Australian documentary that pulls no punches in its brutal illustration of the state of the ocean and its marine life.