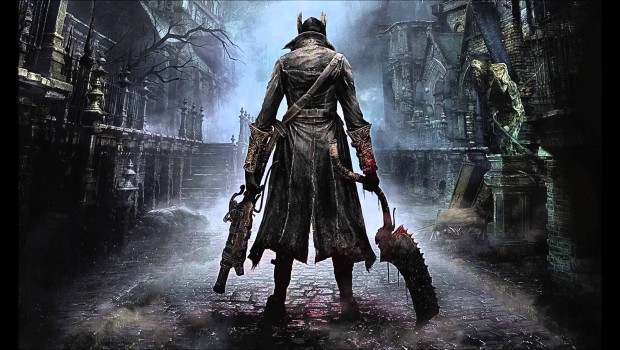 Summary: It may seem impenetrable at the beginning but Bloodborne rewards perseverance and dedication.

Bloodborne is the spiritual successor to the “Souls” series of games (Demon Souls and Dark Souls 1&2), so longtime fans of From Software’s other works kind of know exactly what to expect here: Punishingly brutal difficulty levels, a unique world populated with all manner of beasts, terrifying boss fights and a storyline that could be referred to as vague, at best. 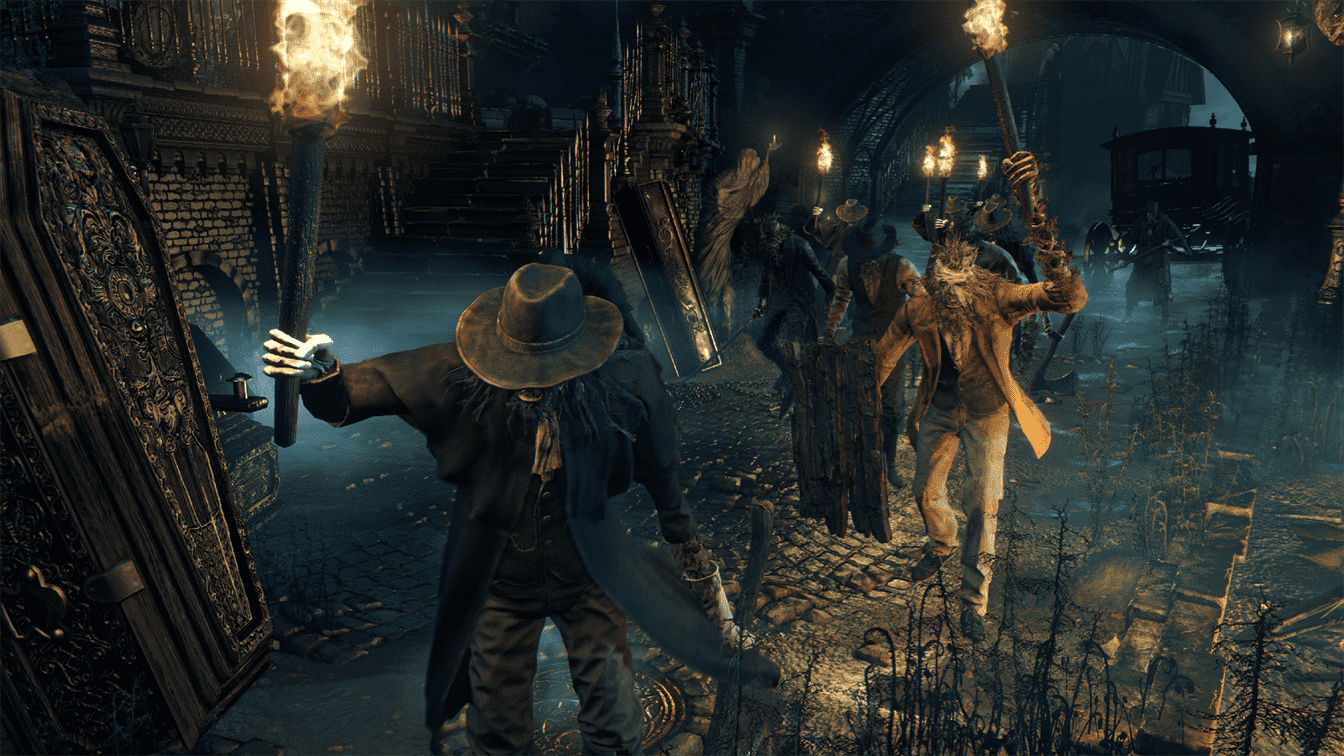 But things aren’t quite as fans had been anticipating, with a shift in the combat mechanics turning Bloodborne into an all out offensive attacking romp rather than the plodding experience of hiding behind a shield and patiently waiting for a window of opportunity to strike before quickly going back on the offensive.

This change didn’t really affect me as much as it did many other Souls veterans, as turtling was never really my preferred style of play; instead I would often dual wield, only relying on a shield when it was absolutely necessary (Often to my detriment, I must admit), so adjusting to Bloodborne’s emphasis on offensive manoeuvres wasn’t too difficult at all. 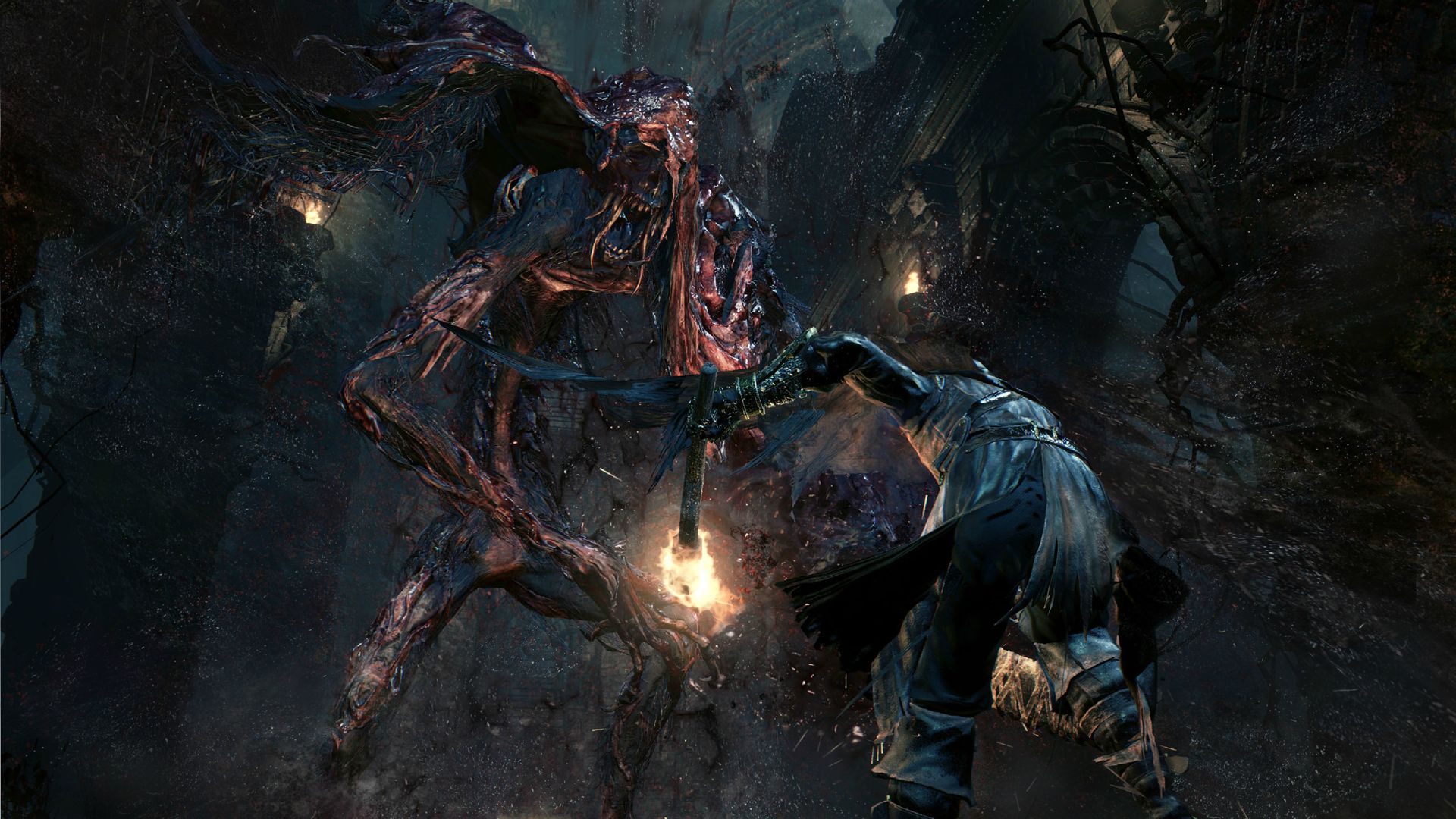 The first major deviation from the Souls series is the setting, with Bloodborne eschewing many of the fantasy realm tropes in favour of a grim, Victorian London-esque environment that conjures up fond memories of the old PSX Nightmare Creatures. The game opens with your character awakening in a dimly lit surgery as a wheelchair bound old man raspily informs you that you’ve just undergone a blood transfusion with lycanthropic blood… A procedure that definitely isn’t covered by Medicare.

You’d initially travelled to Yharnam in order to cure an affliction but instead you find yourself charged with the duty of being a hunter; the city is under siege from all manner of bestial creatures due to a transformative plague and Hunters are the only thing that stands between them and total annihilation. Despite your honourable intentions, most of the townsfolk treat you with distrust, holding you accountable as the source of the plague and townsfolk, beasts and fellow hunters all openly attack you at every turn… Friends are few and far between in the gothic landscape of Yharnam. 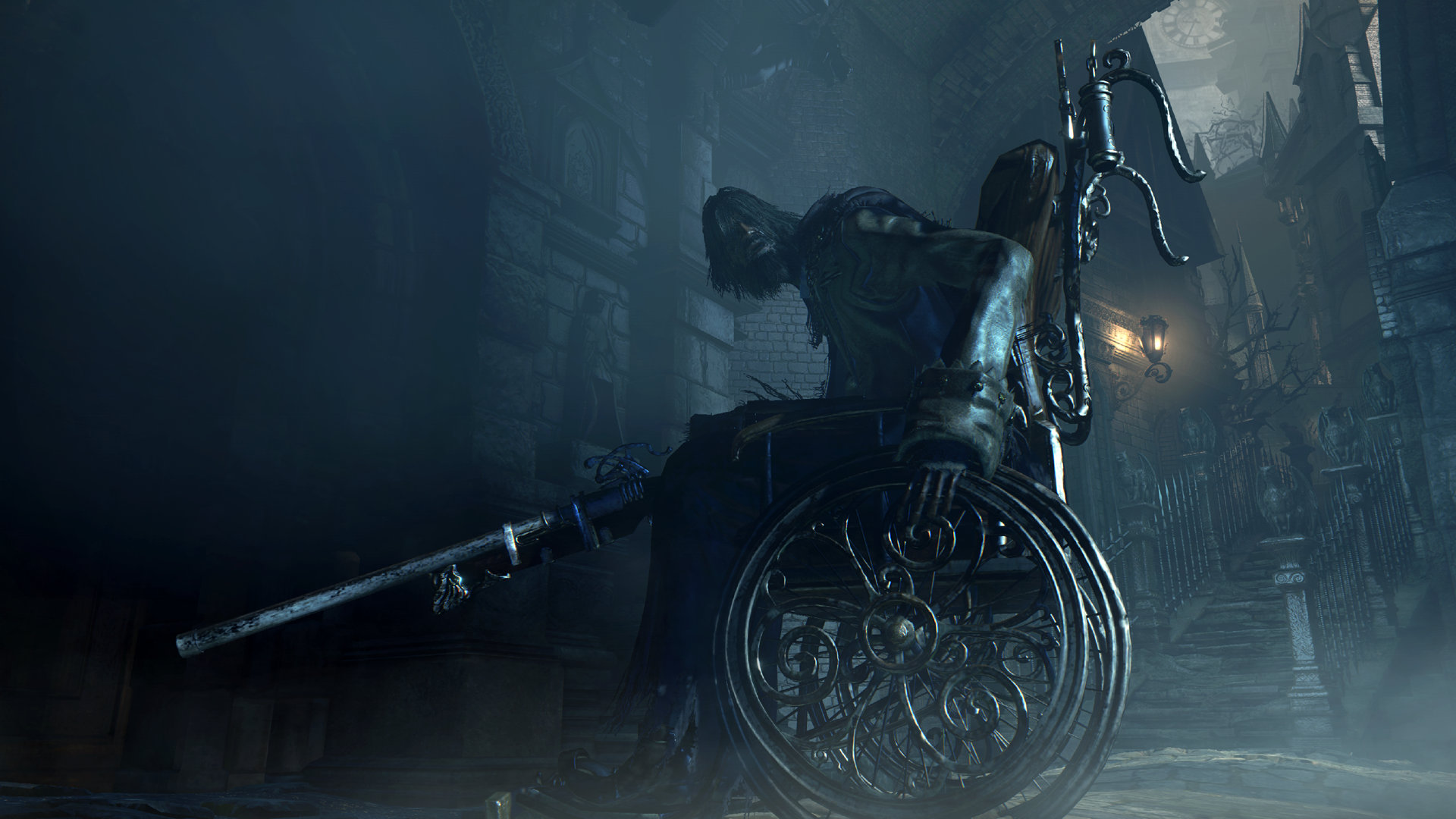 The opening few hours of the game are far from accessible to newcomers and many will find themselves put off by the controller smashing difficulty; Bloodborne doesn’t pull any punches and it’s not uncommon to die upward of twenty times whilst learning the lay of the land. But therein lies the rub – You’re learning something with each death.

Every time you venture just that little bit farther than before or face that intimidatingly large new enemy type you’re making progress and learning how the different elements of the game work and what tactics to apply during your next run. Stick with it and before you know it you’ll be slicing through enemies like a hot knife through butter, although you can never get too overconfident – All throughout the game you’re constantly at threat, even from the lesser enemies, and it only takes one misjudged assault to make everything quickly turn to crap. 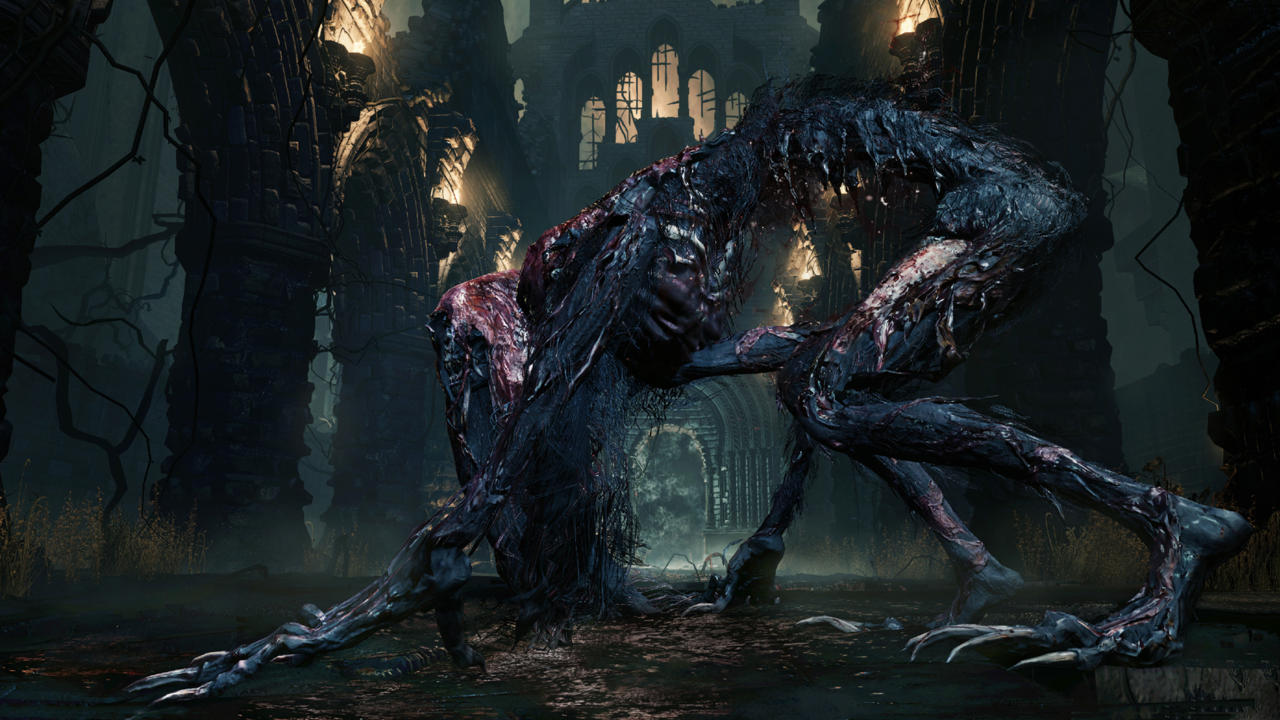 Take combat, for example – You’ll enter Yharnam relatively ill equipped after your first unarmed encounter with a werewolf. Over time you’ll start to learn the intricacies of your weaponry, like the parrying ability of your sidearm that can be used to halt an attacker in their tracks and the different states of your weapons themselves; I used the axe, which can be wielded in your right hand and used for light and heavy attacks or, with a quick press of L1, can be extended to Scythe length and used to increase your reach for powerful attacks.

One of Bloodborne’s key mechanics is the regain system, where you’re afforded a small window of opportunity after being hit to counterattack and regain a portion of your health. This changes things immensely from the Souls game by actively encouraging you to rain down a flurry of blows upon your attacker rather than quickly rolling away and rehealing. This risk vs. reward design works in Bloodborne’s favour and, as a result, the combat feels much more fluid and frenetic than that of the Souls games. The foundation is the same but the few tweaks and changes make for a completely different combat experience. You can always heal using a blood vial with a quick press of triangle but, if you take advantage of the regain system, you’ll find that relying on the game’s equivalent of health potions just isn’t necessary. 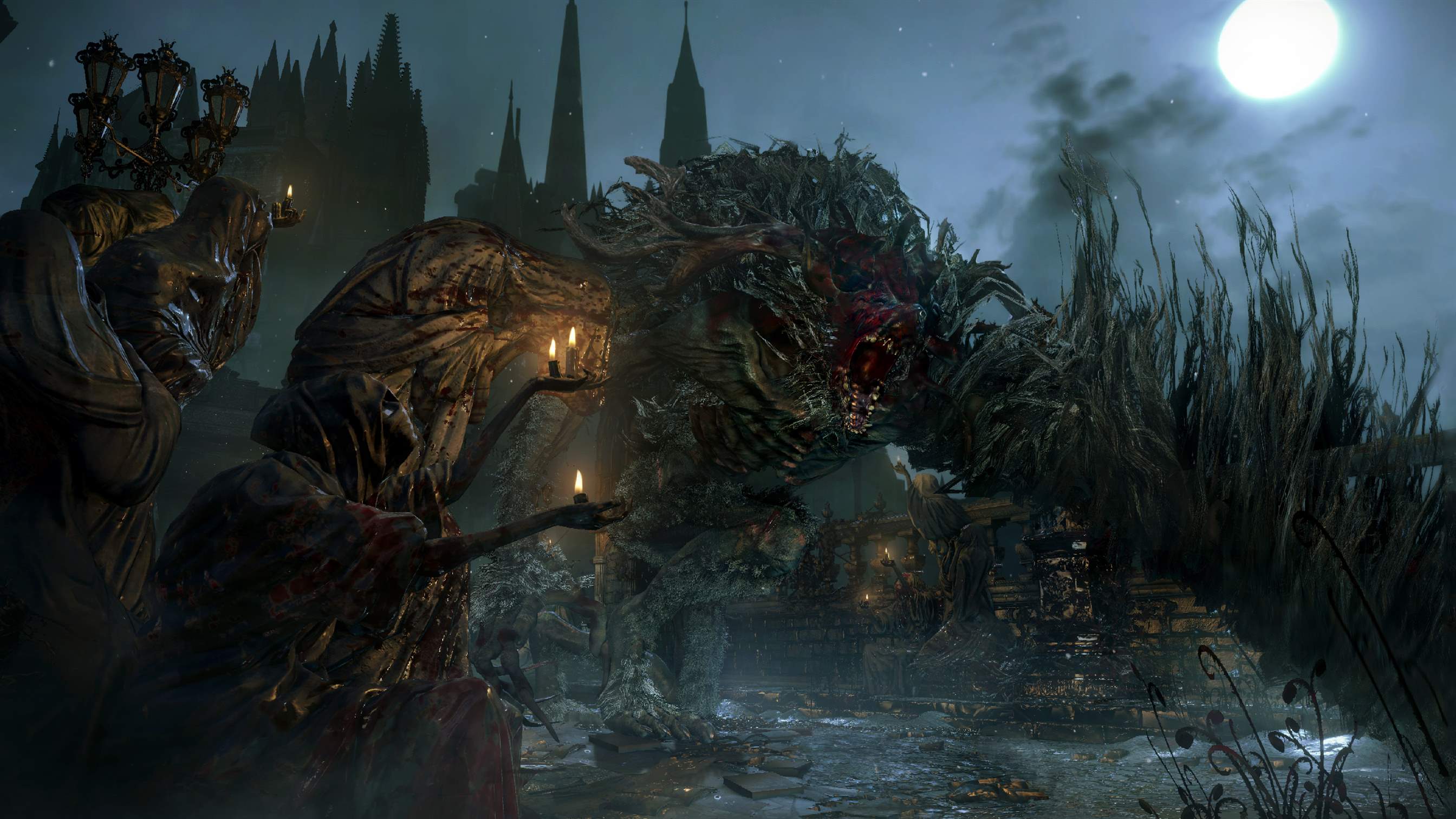 Although you’re in a hostile land and constantly besieged by all manner of enemies, there is one location where you can get a slight reprieve: Hunter’s Dream. As ethereal as the name suggests, Hunter’s Dream serves as your hub where you can upgrade your weapons, apply attributes, buy and sell items and increase your stats by using blood echoes, Bloodborne’s main currency system.

If you’re finding progression a little too difficult at time, you can request assistance from other players (and, on occasion, NPCs) for some co-op multiplayer. This is achieved by ringing a beckoning bell that will locate other players in the same are as you.

Conversely you can offer help to other struggling players or, if you’re so inclined, you can invade the games of other players and hunt them down for some good old fashioned player vs player action; nothing strikes fear into your heart more effectively than seeing a message pop up that you’ve been invaded and later in the game certain enemies will drop invaders into your game on top of the usual beasts you battle, making for some rather tense experiences. 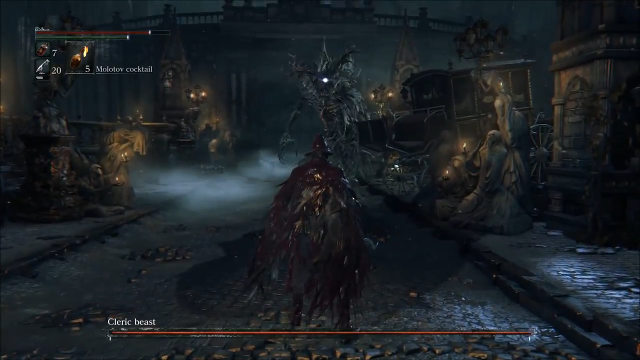 You can also leave notes for your fellow travellers, whether they be helpful or a hindrance, and view the last few moments of another player’s life by touching their bloodstains.

The level design is incredibly astute and has been crafted with a myriad of shortcuts and hidden paths that will make traversing areas much more manageable once you’ve unlocked them. The environments are varied enough to hold your interest, especially as the game progresses and you venture away from Yharnam a bit, and the gothic inspired art design is an absolutely sumptuous feast for the eyes. As mentioned above, the Lovecraftian enemy design is also a joy to behold, especially the ancient eldritch abominations that cling to the cathedral after a certain point is reached in the game.

After the main story is completed players can embark on a New Game Plus playthrough as well as seek further challenges and rare bounty in the uniquely generated Chalice dungeons. 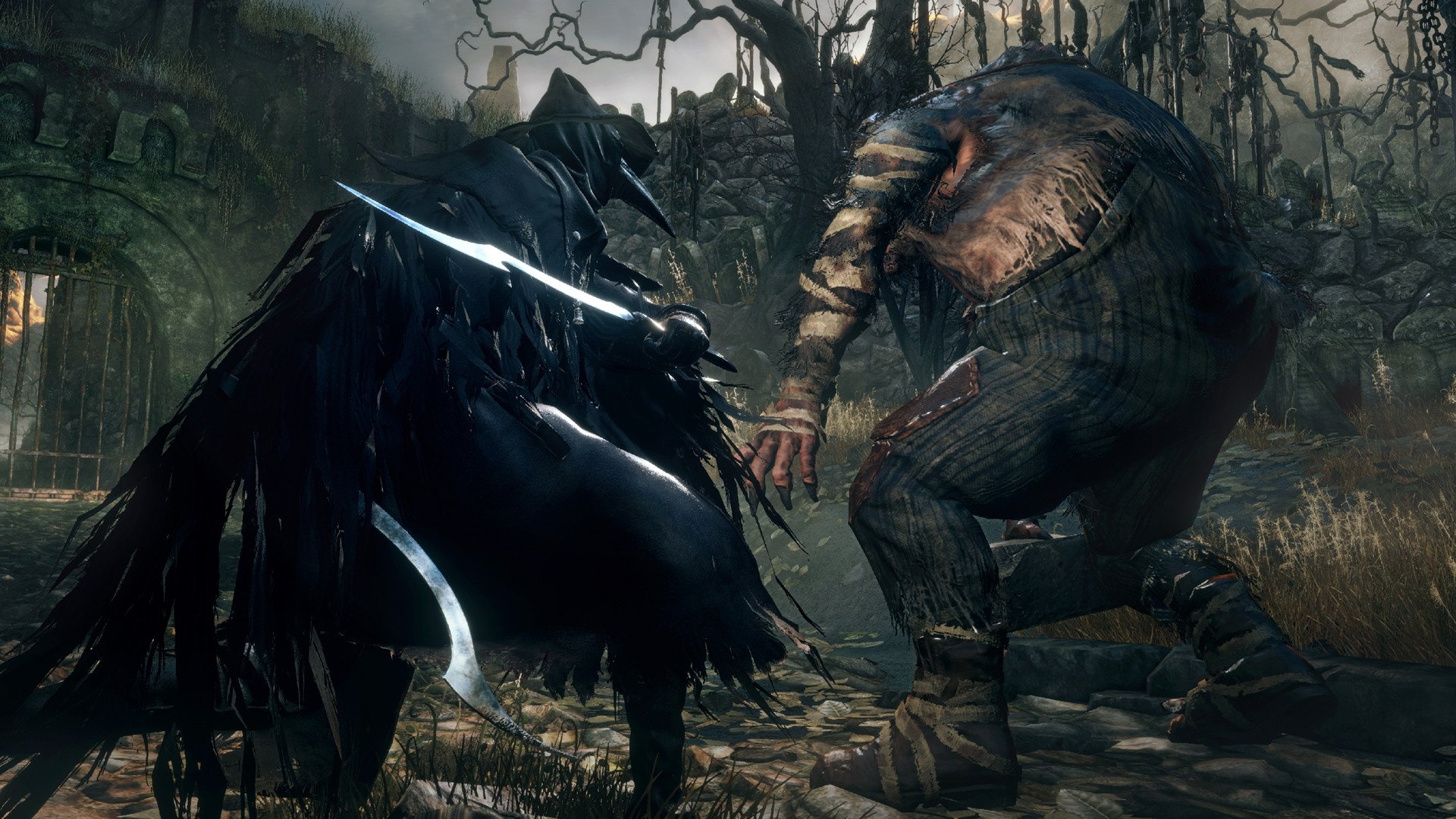 Graphically Bloodborne is a solid experience, if slightly unremarkable. Although it lacks the polish of other recent games like The Order 1886, the aesthetics of the environment make for a visual experience like no other and the enemy designs are all rather inspired, especially the myriad of bosses.

Unfortunately the game is let down at times by a stuttering framerate, although thankfully this seems to be restricted to only two or so areas like Old Yharnam and the Unseen Village. There’s also some issues with the lock on camera in which the view will be obscured in tight hallways and the like, but thankfully these instances are relatively rare. 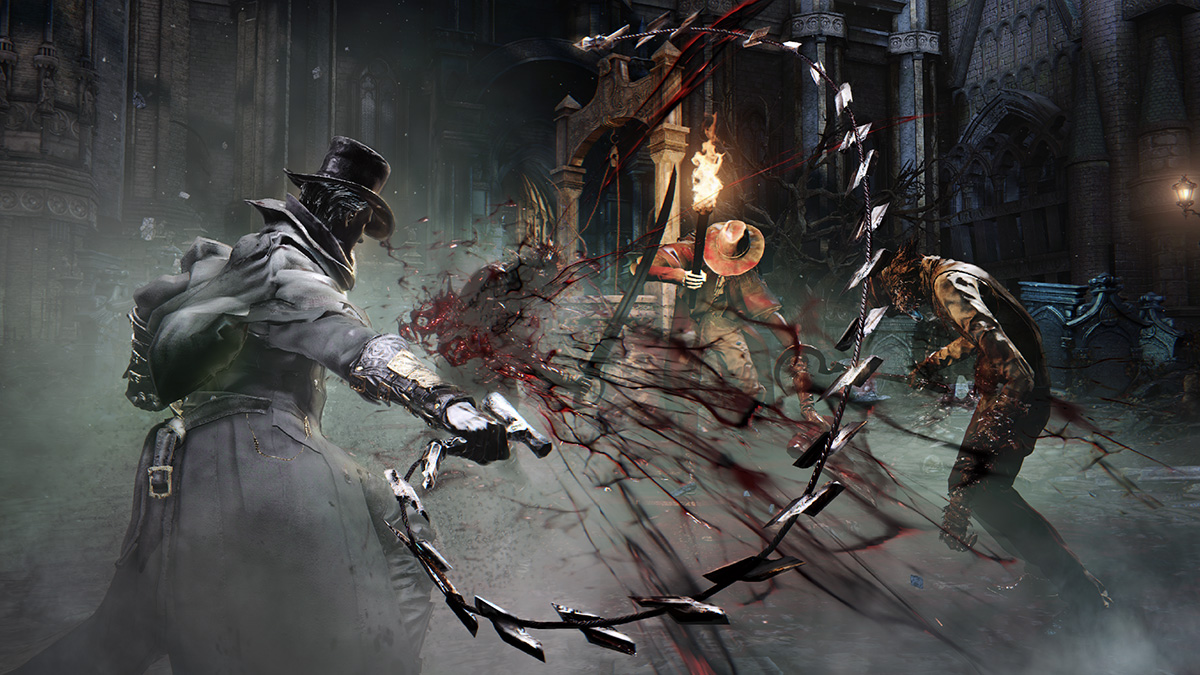 Another bone of contention many have with the game are the ridiculously long loading times, with it not uncommon to sit staring at a black screen with Bloodborne emblazoned upon it for a good forty seconds or so after each death or transition from one area to another. For a game that revels in killing off its player at every turn it’s a bit of an inconvenience but From Software have promised an upcoming patch is in the works to rectify this issue.

The sound design is absolutely exemplary, invoking a sense of fear that really serves to immerse the player into the dark and grimy world of Yharnam. The cries and catcalls of your enemies create a constant cacophony that will have you on edge each time you venture blindly into a new area; the ambient sounds and whispered mutterings of your enemies really serve to heighten the unsettling survival horror atmosphere. There’s not too much of a musical score, although the use of a famous piece of music in a late game boss fight will elicit a smile from even the most hardened gamer and is a rare moment of levity in an otherwise unrelentingly bleak gaming experience. 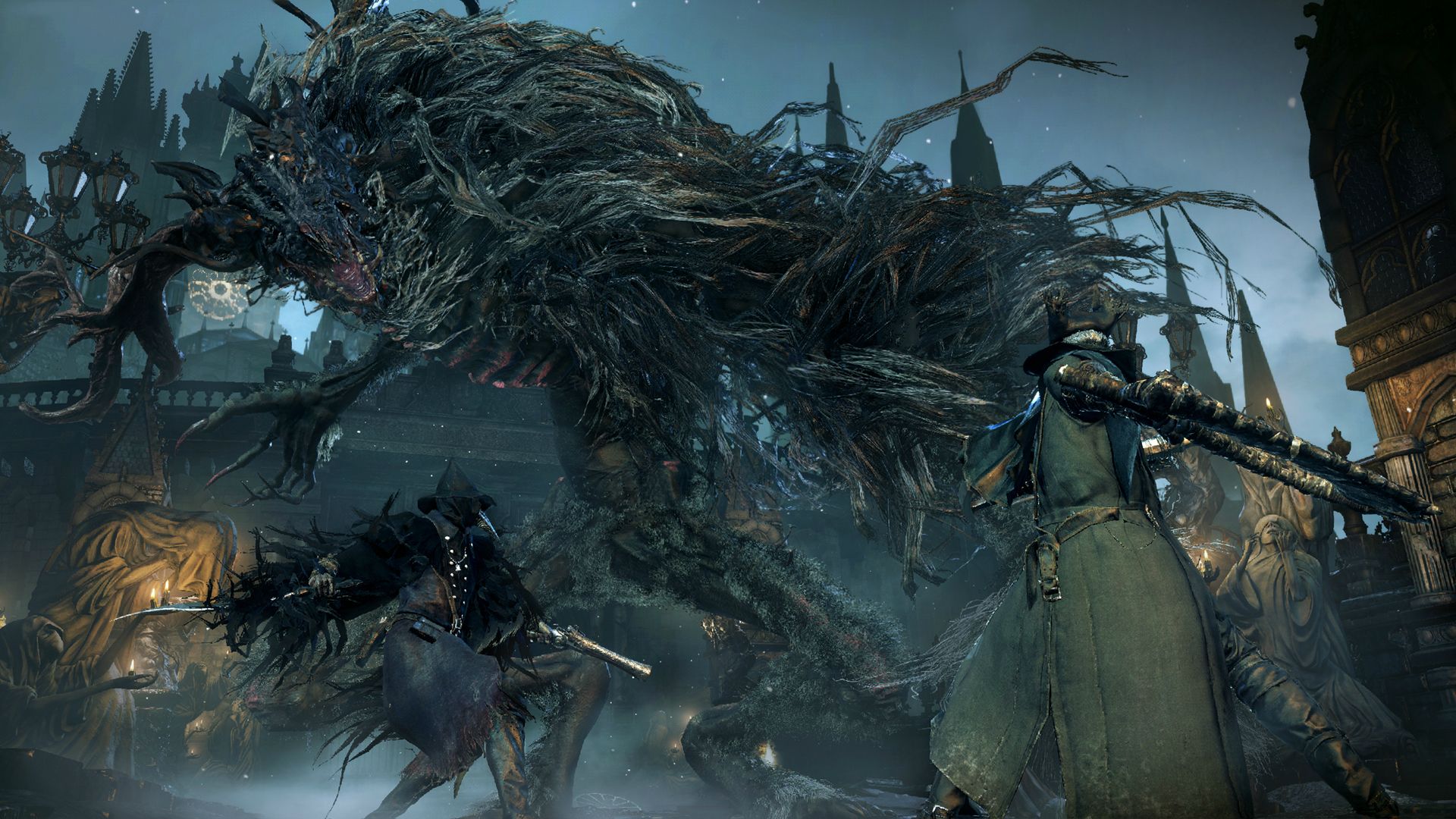 Bloodborne is the system selling exclusive that the PS4 has been waiting for (Sorry, Infamous: Second Son; we’re still cool though) and stands tall as the most accomplished game to come out of From Software’s studios to date. If you dig Bloodborne then definitely go and check out From’s other offerings… You won’t be disappointed, even if the pace is somewhat slower (And, coincidentally, Dark Souls 2 is getting a current gen remaster sometime this month, so get on board!).

It may seem impenetrable at the beginning but Bloodborne rewards perseverance and dedication; sure, it’s as difficult as all heck but never unfairly so and there’s no greater sensation than finally trouncing that creature who’s been consistently handing your ass to you. Of course, it’s not for everyone but those who stick out the slightly overwhelming introduction will find that Bloodborne offers a gaming experience like no other. 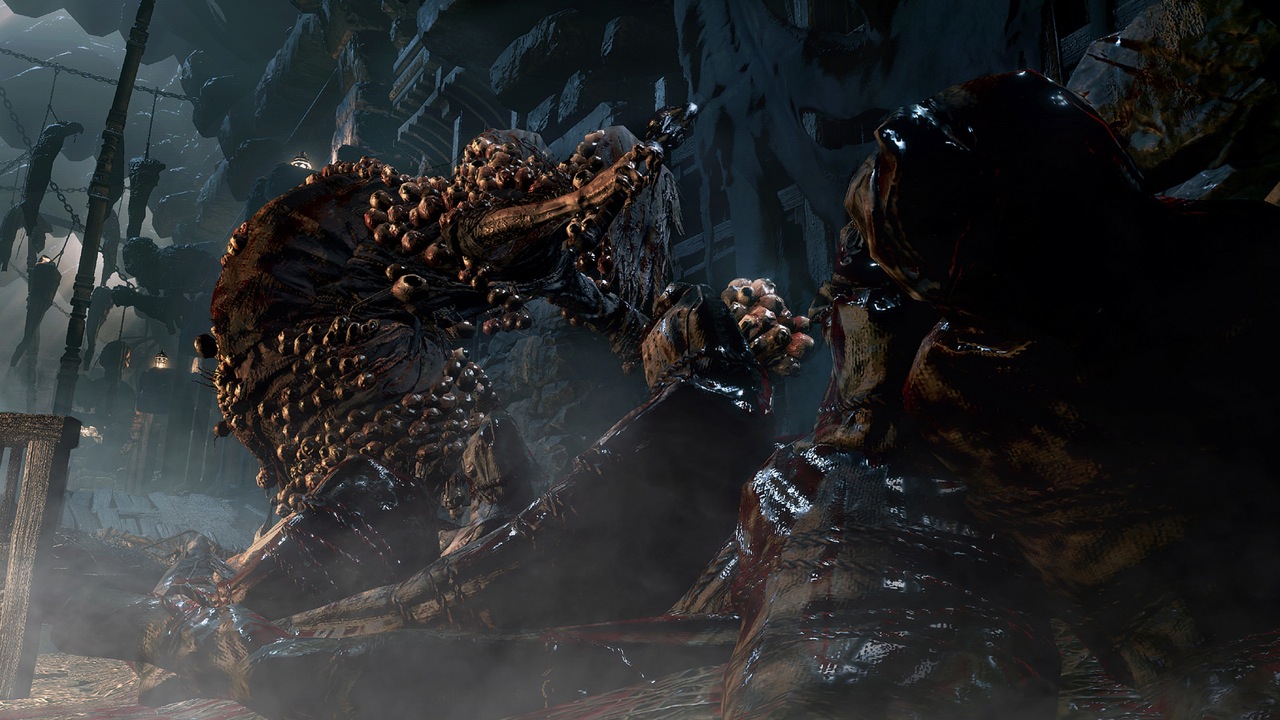 Simply put, there hasn’t been another game that has consumed my life as completely as Bloodborne has, especially this console generation, not even GTA V or the other Souls games; in fact, I’d go so far as to say that it very nearly topples my two all time favourite games– Final Fantasy VII and The Legend of Zelda: Ocarina of Time – off of their perches. Yes, it really is that good.

Pop the disc into your console, be prepared to die and let the good blood guide your way. 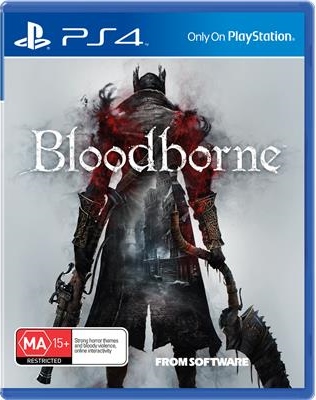