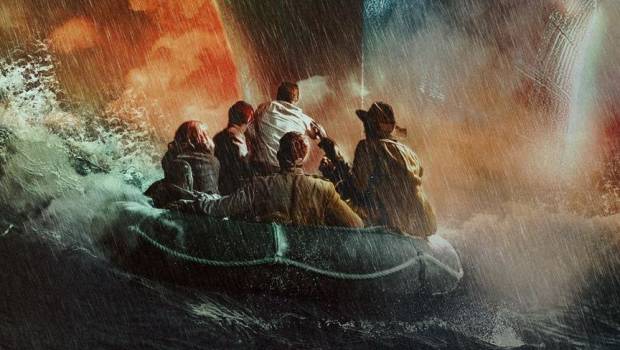 Summary: Suviviors of a U-Boat attack on a hospital ship in the dying days of WWII seek salvation on a seemingly abandoned Nazi ship...or is it?

Somewhere in the North Atlantic in the late stages of World War II the only survivors of a U-Boat attack on a hospital ship sight a Nazi ship and decide to board even though it may mean the end of them. Upon boarding they find the ship has been set and locked on course and seems abandoned, only the start finding dead bodies, some that met a grisly demise. Upon further investigation they find a young girl hiding in the corners, but something seems wrong. Will they get to the bottom of the mystery?

I thought this movie sounded familiar as I remember Death Ship from 1980 having a similar plot about a Nazi ghost ship. This movie has 100% less George Kennedy and looks like someone spent some actual effort here unlike that movie.

As with a lot of horror films the characters are archetypes that would fit right in with a role playing or board game such as the English Captain, the Aussie tough guy, the African American mechanic, the New York wise guy, Russian sniper, English nurse and a snivelling codebreaker.

I heard this film was enjoyed by quite a few people at MonsterFest in 2019 but I had not caught up with it as yet. Nazisploitation is a genre in itself as they are the automatic bad guys and you can kill them all without feeling bad. The more recent Overlord, Dead Snow and the Keep are sort of similar to this movie but this one does have an ancient evil which has more of a Cthulhu vibe mixed in with the usual blood suckers.

For a movie that seems like it should be low budget it looks a lot better than it has a right to. Leans a lot into things being dark so you don’t have to light a lot and having detail only where it is needed. They only show the monster towards the end of the movie so you don’t get tired of it either.

Everyone does pretty much act like you expect them to act and you do get to see the Aussie say “GET FAAAARKED!” to the beastie. Even the Russian gets in on the act at one point mimicking the Aussie accent.

I had not heard of Wicked of Oz pictures before and most of the search results seem to be about some musical but I am looking forward to what they put out in the future if this is one of the first things they have released.

Worth a look if you are into horror and more historical themed stories other than the usual teen themed slashers.