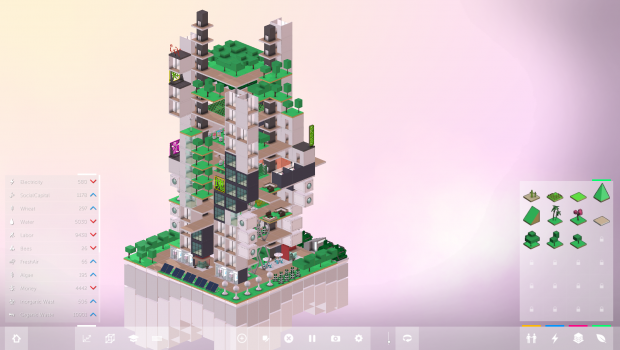 Block’hood is a city simulator that just entered Early Access. Where most city sims ask you to create neighbourhoods that sprawl across large expanses of land, Block’hood gives you a small square to build on and encourages you to grow your city upwards. The creations that the developers have shared in the gameplay tutorials are incredible examples of how this can look, but creating vertical masterpieces is difficult in practice.

In Block’hood, you must manage a complex ecosystem of resources to ensure nothing falls into deficit, with almost every block requiring both an input and an output. This system can make it difficult to start building—it’s almost impossible to begin with only one block, because most available blocks (particularly in Challenge mode) cannot work without the necessary input and will quickly begin to decay. This system can also make it difficult to plan your perfect city, as you often don’t know what you will need until you have already built a number of blocks. Thankfully, you currently do not require resources to build a new block, so you can delete and create blocks at your leisure. 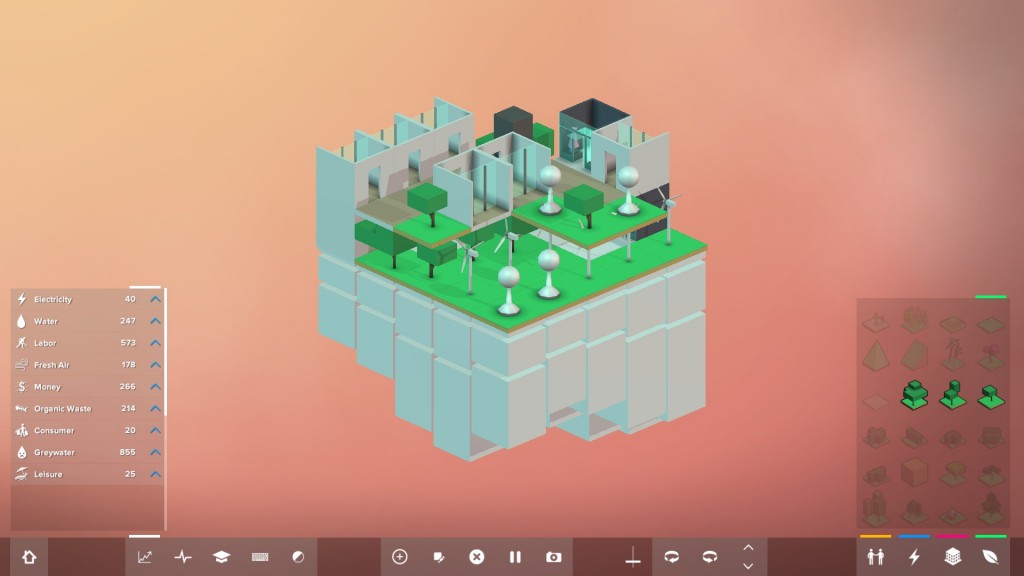 When you open Block’hood, you are greeted by three modes: Challenge, Sandbox, and Tutorial. I started with the tutorial because I am that sort of gamer, particularly when faced with a new city simulator. I’m glad that I didn’t dive straight into the game, but I also found that the tutorial felt quite distant from the joyous city-building freedom I witnessed in the gameplay trailer of Block’hood. The ten tutorials took me quite some time to navigate through. The teaching style reminded me of sitting in the back row of a university lecture theatre, tuning out during first year courses.

After completing the tutorials, the game encouraged me to try Challenge mode, which I did. This mode doesn’t feel particularly well-balanced. I found the early challenges too easy, as I quickly found a combination of blocks that worked and then spent the rest of the challenge waiting impatiently for the target resource total to be met. Each time, I contemplated expanding my city so that the total could be reached sooner, but I knew this process would throw out the system I had developed and a lot more blocks would be required to re-establish the balance. In the first challenges, expansion from the first functional model may not even be possible, as the square you are given to build on is very small, and the use of blocks like elevators and stairs are restricted so that building upwards is not an option. 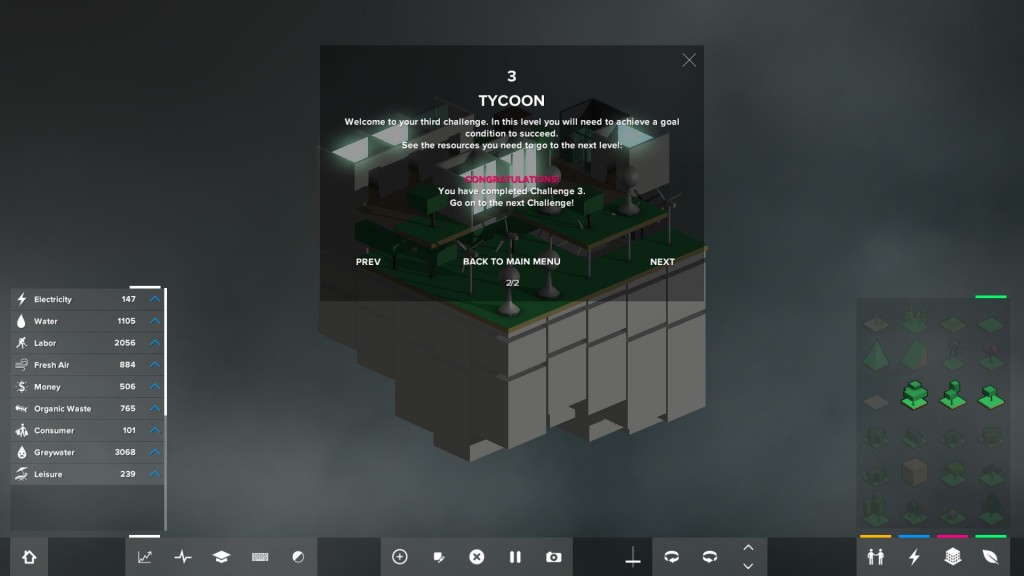 In Challenge Three—which requires you to reach 500 ‘money’—I built a functional model and, with elevators finally unlocked, I decided to attempt expanding my city to see what happened. At first, catastrophe struck and everything threatened to crumble, but I did manage to establish a new, delicate ecosystem. However, it seemed as though my money was hardly rising any faster than it had been before, and I wondered if the extra time and effort was worth it. With this knowledge, I left the game running while I made and ate dinner, and when I returned the challenge was nearly complete. This process reminded me less of playing a game and more of waiting for a game to install.

These issues seem entirely tied to the balance of the game’s resource management, which is slightly off—just enough for me to find the challenges unenjoyable in their current state. The early challenges aren’t challenging at all, while the later challenges are too difficult without offering me a high enough sense of achievement for completing them. When Block’hood was first released on Early Access, Challenge 12 was actually unbeatable and a recent update had to be made to patch this issue. The developers seem to be very active in discussions, so hopefully they will be adjusting these balance issues and making the challenges more enjoyable in ongoing updates. 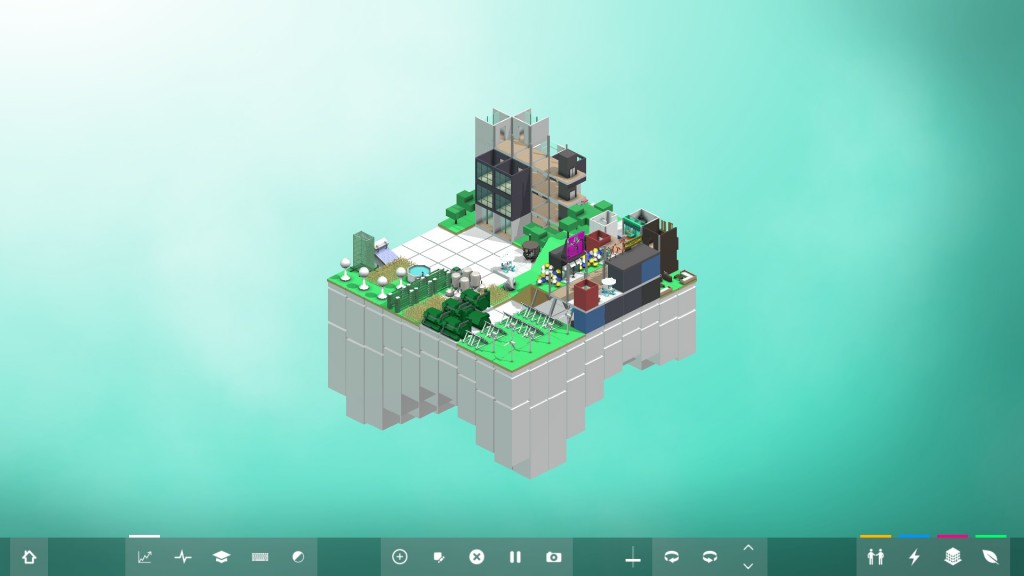 Unable to find the satisfying middle ground between too easy and too difficult in Challenge mode, I moved on to Sandbox mode. Here, all of the game’s 96 blocks are unlocked (a total which developers have promised will be growing), and this makes things very confusing at first. The blocks are grouped in four categories, but seem quite illogically ordered within each. Some of the blocks are alphabetical, but others seem to be ordered almost randomly. It’s hard to find the block you need, and it’s even harder to find a block that uses or produces a particular resource because it doesn’t seem possible to filter the blocks by input or output.

I made it part-way through building an epic city of multi-storeyed apartments and stores in Sandbox mode, but after about half an hour, I lost interest. I diligently built enough of each type of block so that the next could be sustainable, until eventually I was using beehives to produce bees and I didn’t really understand why. Playing a game until you unlock the next thing, and then the next thing, and then the next thing has the potential to be an addictive model (I’m looking at you Stardew Valley) but Block’hood just doesn’t have that drive for me yet. 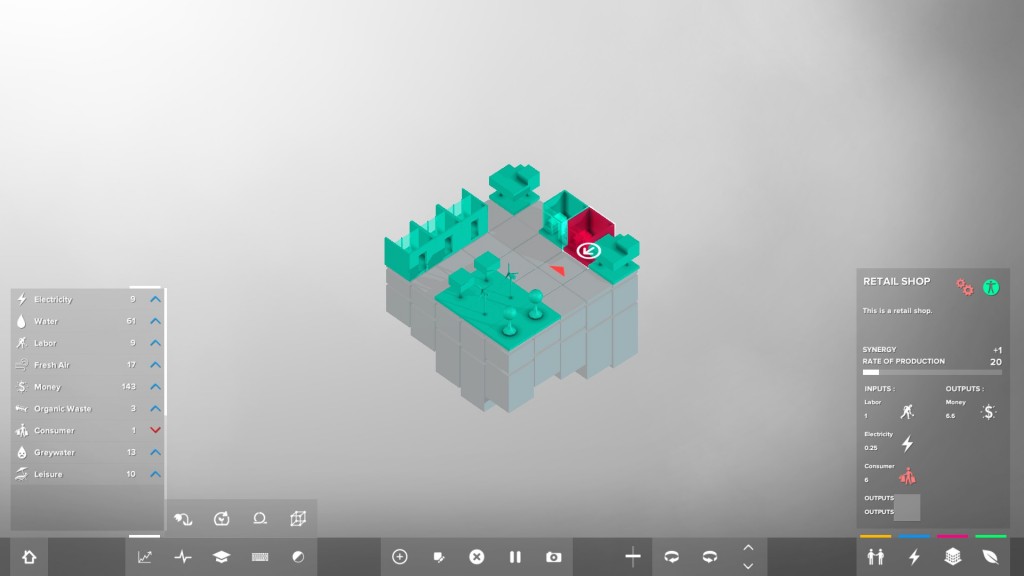 There is an interesting sustainability focus in the game though, which is worth mentioning. The city I created in Sandbox mode was a utopia, entirely free of pollution and sickness, with wind turbines and water towers collecting my core resources. I thought that creating a sustainable, utopic city would be much harder than a polluted one (with non-renewable resources often positioned as the ‘easy option’), but that doesn’t seem to be the case in Block’hood. Perhaps running a city on renewable energy isn’t as difficult as we are led to believe (or perhaps this balance also needs tweaking).

Block’hood is a beautiful game filled with potential, but most of the time I wasn’t looking at its stunning sunsets and showers of rain because I was either in minimalistic data screens ensuring that my city was functioning or away from my computer waiting for a challenge to finish. I want to live in a city that looks like a completed creation from Block’hood, but perhaps I am just not the right person to design one (at least, not yet). 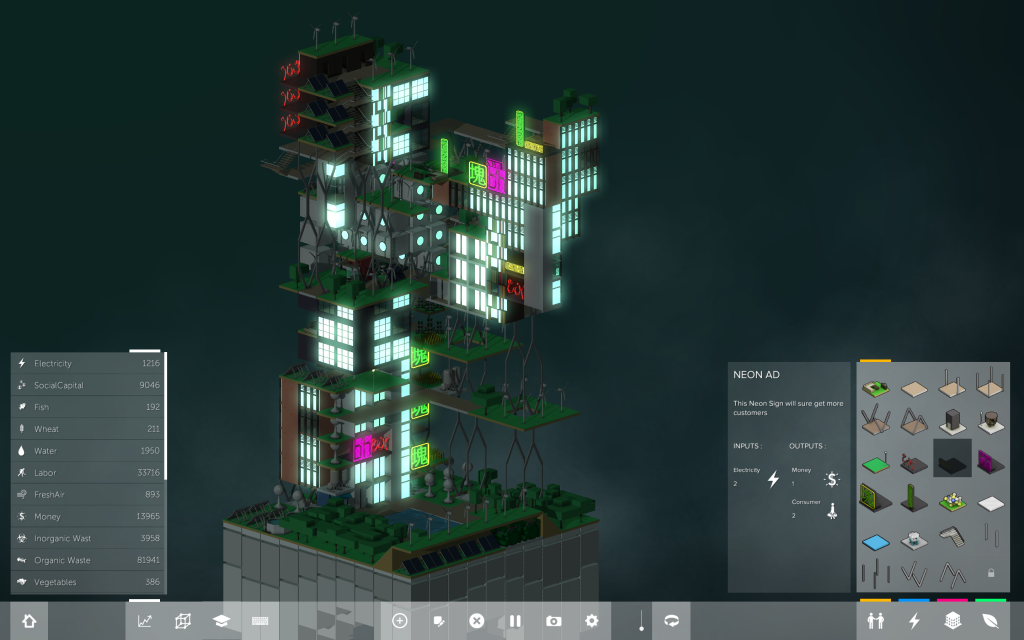