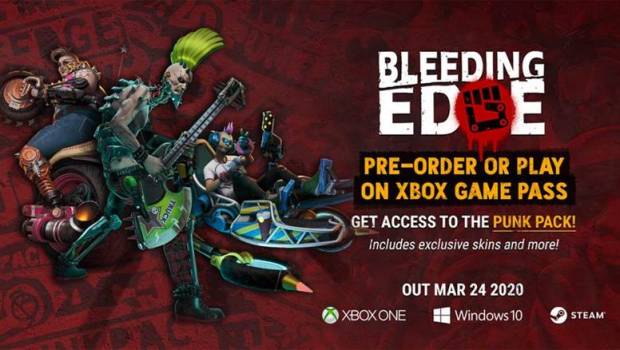 The day is finally here – Bleeding Edge is now available worldwide with Xbox Game Pass and on Xbox One, Windows 10, and Steam!

From humble beginnings as a passion project developed by a tiny team at Ninja Theory, it has been absolutely incredible to see Bleeding Edge smash its way into the hands of our fans, and we couldn’t be more excited to see you all out there in the arena.

For the uninitiated, Bleeding Edge is a unique 4v4 online brawler that showcases exhilarating combo-based action combat and strategic objective-based gameplay. Best experienced with friends or open communication with other players, Bleeding Edge redefines the meaning of squad goals and really puts the team in teamwork. At launch, Bleeding Edge features a diverse roster of 11 larger-than-life fighters hailing from the edges of society, 5 vibrant sprawling cyberpunk arenas, and 2 fast-paced game modes: Objective Control and Power Collection.

As an Xbox Play Anywhere title, Bleeding Edge is fully cross play and cross save between both Xbox One and Windows 10 and also with Steam – this means that if you played during our Closed Beta, all your progress will be saved for launch.

Those who pre-ordered Bleeding Edge will also receive the Punk Pack.

We have a new map available in the rotation: Landslide! Landslide is set in sunny Mexico and features unique defensive power ups, and a few mini trains. Getting hit by a train packs a fair punch, so be sure to push or freeze your opponents on the tracks at just the right moment.

Mekko, everyone’s favourite trash-talking dolphin will be coming to Bleeding Edge soon as a post-launch update. Check his fighter page here on our website to read up on his moves.

We’ll continue to support Bleeding Edge, but we also want to hear from you, the community. Please join our Discord or visit our forums to tell us what you think of Bleeding Edge. As we always say, your feedback is very valuable to us in helping shape the game and make it the best it can be. We couldn’t be more grateful for having such a passionate and dedicated community that have been with the game since technical alpha – thanks to your feedback, we’ve made some fantastic recent changes and additions to Bleeding Edge, such as improving the pacing of our Power Collection game mode and adding anti-heal mods and abilities.

So, what are you waiting for? Grab your team and ready up for some hypercharged 4v4 action, on us!