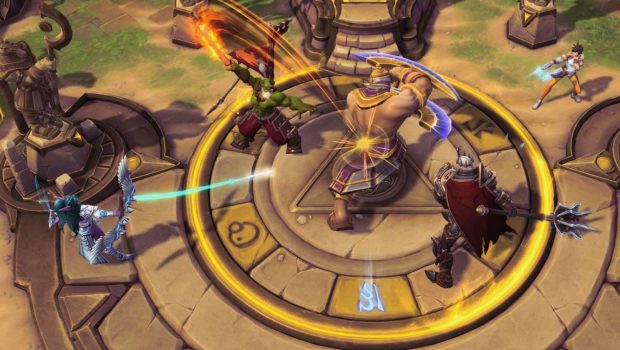 Blademaster, Samuro, Now Slicing the Heroes of the Storm PTR!

Samuro, the last remaining blademaster to wear the banner of the Burning Blade, is on a warrior’s pilgrimage in search of vengeance and redemption for his fallen clan. As a new assassin coming to the Nexus, Samuro will flex his basic abilities on the battleground, including Mirror Image, a skill that allows him to create two images that deal 30% damage to enemies, and have 50% of his current health, for up to 18 seconds. Critical Strike amplifies Samuro’s basic attack to become a critical hit on each foe in his path for 10 seconds, and dealing a massive 50% extra damage. His third ability, Wind Walk, allows him to enter stealth for up to eight seconds, where he receives a 25% increase in movement speed.

Samuro’s Herioc abilities are forces to be reckoned with: Bladestorm sees him become an unstoppable whirlwind, dealing damage to all nearby enemies for four seconds, while Illusion Master allows him to switch places with one of his Mirror Image clones.

Samuro will be an incredible ally and powerful enemy in Heroes of the Storm. Try him now on the Public Test Realm (PTR) and experience first-hand what’s coming into the Nexus soon. For more information about balance changes and other content available to play on the PTR, please read the patch notes here.