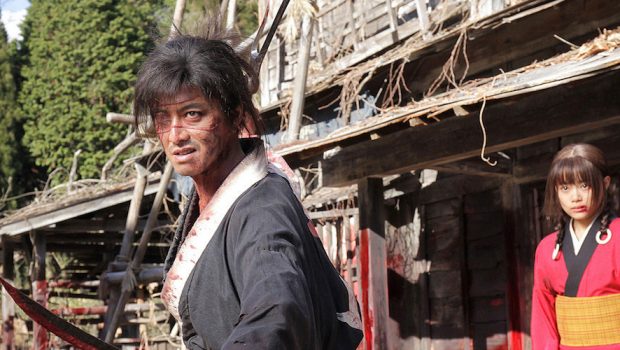 Blade of the Immortal – Film Review

How far should one go in the pursuit of revenge? At what point does an individual’s desire for vengeance produce such a quantity of bloodshed that it becomes completely immoral? Is there still honour in hiring somebody to enact your desire for revenge? Is violence and bloodshed a reasonable solution at all, when all things are reckoned? These are common questions for a samurai film, and they were the stock in trade for the masterpieces by the likes of Akira Kurosawa and Toshiro Fujita. Rather than leaving these questions for sites like Spider’s Web Castle, Takashi Miike’s 100th film engages with these questions, too! And he does so with surprising aplomb and depth for a live-action Manga bloodbath. But is it any good? Does it match 13 Assassins? Can it live up to Hari Kari? Does it honour the legacy of Kurosawa? It does! Read on to find out why!

Set during the Tokugawa Shogunate period (the last throes of the Shogun period before the Meiji modernisation of Japan), Blade of the Immortal follows Manji (former SMAP singer, Takuya Kimura) and Rin (Hana Sugisaki) as they try and get revenge for the murder of Rin’s parents by the Ittō-ryū—a gang of swordsmen attacking dojo proprietors. Manji is a disgraced ronin. Facing exposure for corrupt behaviour, Manji, then a ronin and constable, slays his colleagues to protect his own name and reputation. Unfortunately, his sister, Machi, witnesses him murdering her husband and goes mad with grief. Manji tries to protect her as they flee the authorities determined to get their reckoning, but he fails. Near death, Manji is approached by a Yaobikuni, an ancient Nun, and infected with bloodworms. These bring him back from death and curse him to wander the earth – immortal. 50 years later, the Ittō-ryū, led by Kagehisa Antosu (Sōta Fukushi), slaughter Rin’s parents who run the local Dojo and train soldiers for the Shogun. Rin is left to survive, but is wracked with grief and seeks revenge. She hires Manji to kill for her—bloody violence ensues. 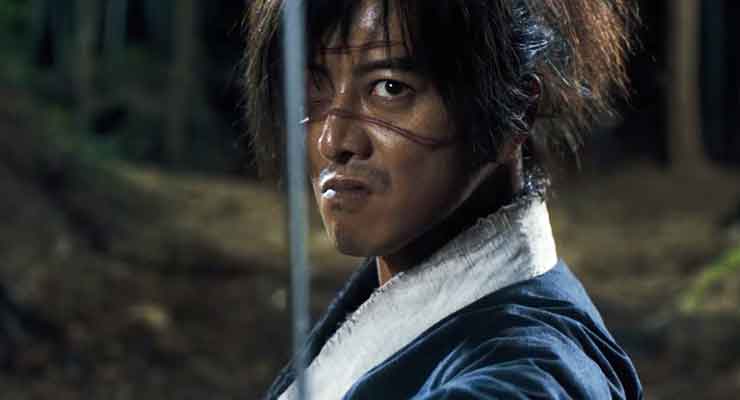 Takashi Miike has been a prolific filmmaker throughout his career. One of the selling points for the film is that it is his 100th film. But this career has often been uneven and not lived up to expectations. Some of his films, such as Ichi The Killer, The Audition, Imprint, 13 Assassins, and Hari Kari, are masterpieces of their genre. Other films like Izo, Shield of Straw, and Visitor Q, fall well short of the mark. And then there is Sukiyaki Western Fandango, which is…errr….unique. Blade of the Immortal is most assuredly Takashi Miike at his finest. While it bears many similarities with 13 Assassins in terms of themes and humour, it also bears a comic book excess where 13 Assassins had with restraint. And it works, spectacularly. Blade of the Immortal balances philosophical ruminations with gorgeously choreographed fight sequences, over the top weaponry, and bloody visceral violence that is presented, disturbingly, as a beautiful thing. 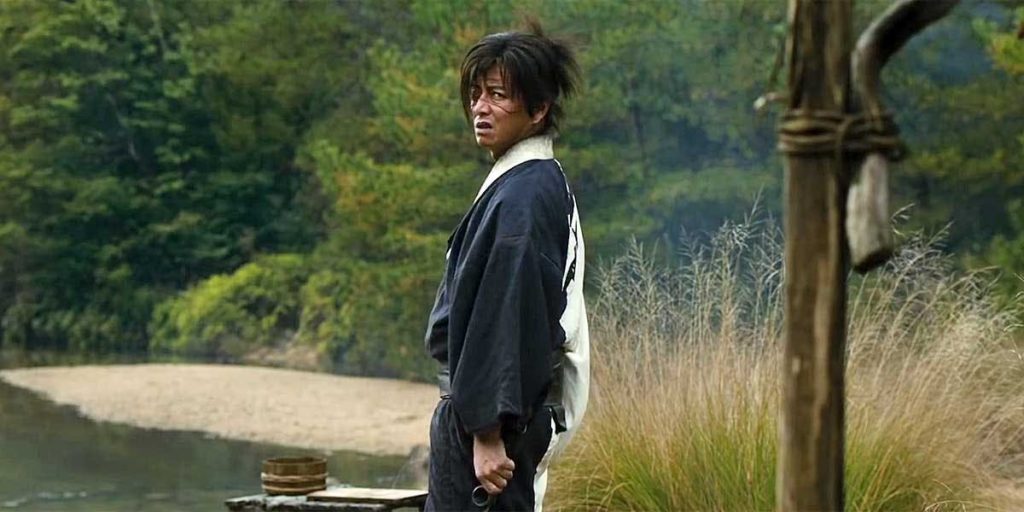 The cinematography is top notch. There are more than a few shades of Sergio Leone in Blade of the Immortal. Nobuyasu Kita develops tension for the audience in the tradition of the Spaghetti Westerns. The framing shots before the battles and duels often linger on the weapons involved, cutting off the expressions and faces of the protagonists, warning of the carnage to come. For example, Miike frames the beginning of one battle through the curve of an axe as a swordsman weighs his options against an army of hundreds. This is more than a little reminiscent of Leone’s low-angle behind the spur or gun barrel shots that defined his work. Similarly, the forest is brought to life as a site of supernatural foreboding that echoes Kurosawa’s Throne of Blood and Hidden Fortress. The woods are as likely full of murderous swordsmen as supernatural witches. The action sequences are kinetic, fast, and balletic. The outdoor swordfights utilise space well, making the biggest spaces seem claustrophobic, tight, and perilous. The internal sequences are remarkable, too! There are two scenes in particular that pay homage to Washizu’s death sequence from Throne of Blood, carefully balancing artistry with action. 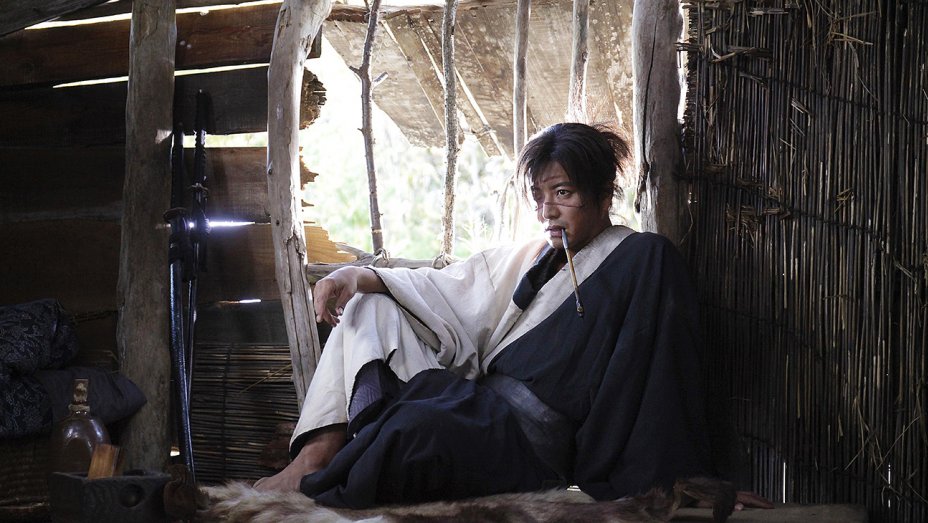 All the performances are solid, if not spectacular. Kimura is great as Manji. He balances weary cynicism with a growing fraternal care for Rin perfectly. Sugisaki as the grieving daughter Rin is often hot headed and rash. But it was a little disappointing that some of her role is too often reduced to fearful scrambles and demuring to Manji’s swordsmanship, but that is Tetsuya Oishi’s script and Miike’s direction. Fukushi brings a determined naivete to Anotsu that is initially a little grating, but really drives the film’s conclusion in a satisfying way. Erika Toda has fun and brings some moral gravitas with the shamisen playing ronin, Makie. While Hayato Ichihara is incredibly unsettling as the baby-faced psychopath, Shira. These aren’t award winning performances, but they are fun. And they carry the film effectively between an ultra-violent comic-book romp and a philosophical ronin epic. 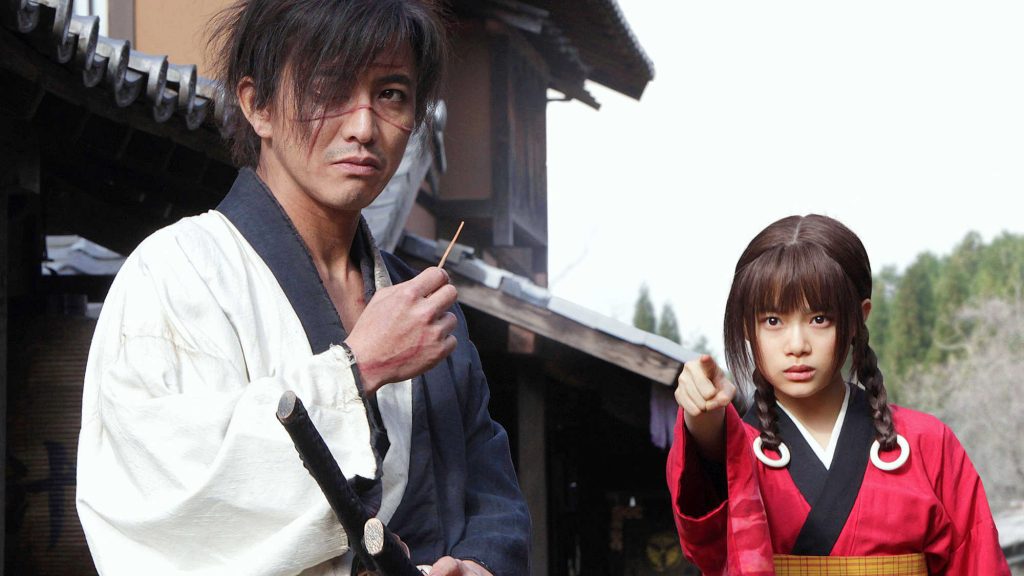 And epic it is, Blade of the Immortal is a long film. Clocking in at 150 minutes it is far from short. This is not unsurprising given that it is drawing from a 30 volume run Manga. But it is still a long film. However, for all its length, Miike keeps the pace and the action honed and tight. The interludes between fight-sequences develop the relationship between Rin, Anotsu, and Maji excellently. Too often Miike’s films seem rushed, and character development has taken second place to fight sequences, set-pieces, and flying body parts with gallons of blood. That isn’t the case here. There is not quite the depth of dialogue that made 13 Assassin’s so evocative of Yojimbo and Seven Samurai, but the humour and monologues help keep it grounded instead. Additionally, there is a solid thrust and riposte of slapstick humour that is reminiscent of the best of Takeshi Kitano or Kurosawa’s The Hidden Fortress. There are many belly laughs to be had between battles and moral ruminations. 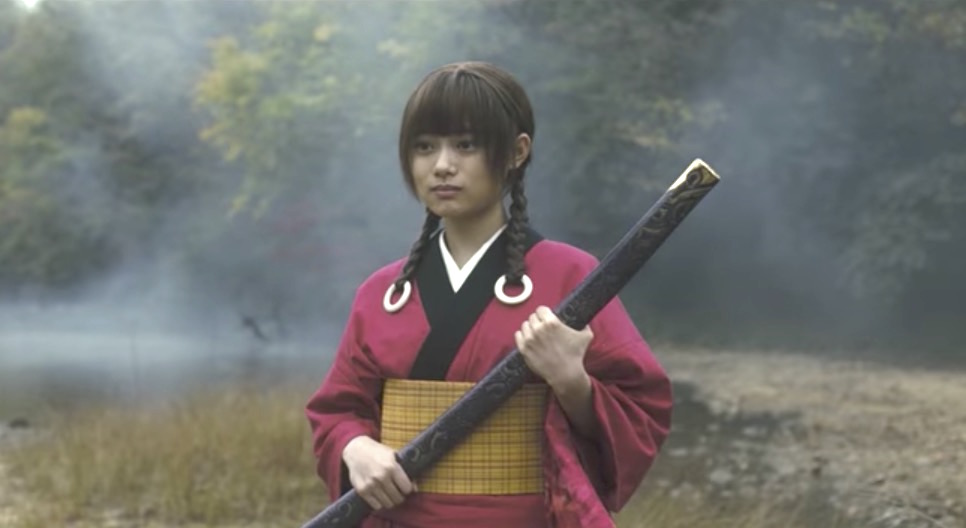 Kôji Endô’s score is outstanding. There is a wonderful balance of traditional Shamisen and Noh music squared off against Spaghetti Western influenced guitars and repeating riffs. There are some excellent musical puns that will make any aficionado of Spaghetti Westerns smile. But more than just musical curiosities, Endô’s score helps drive the scenes and ratchet up the tension. The interplay of traditional and modern music is not distracting, but helps pull the fantastical elements of Blade of the Immortal together. After all, it is hard to take a film about an immortal swordsman who can literally put himself back together after being dismembered completely seriously. There are more parallels to Morricone here in Endô’s work than just the film’s themes and genre. Endô helps Miike do something that few Marvel or DC directors have managed: making a dark and fun comic book adaptation that balances grit with the ridiculous.

Thus, Blade of the Immortal is Miike at his finest. Violent and bloody, it is not for the squeamish or faint-of-heart. But it is enormous fun and carries philosophical depth and gravitas that is often lacking from live-action manga adaptations. And is it ever an excellent live-action adaptation! Blade of the Immortal doesn’t suffer from the cheap effects or naff plotting that usually blights bringing anime or manga to the big screen. Kevin Feige should take note! The acting is solid! The pacing is tight! And the score will probably become cult fare! This is not Seven Samurai, but it is close. It is most certainly an excellent follow-up to 13 Assassins and shows that even at 57, Miike can still swing fast and loose and cut deep!

Summary: Blade of the Immortal is Miike at his finest. 4 ludicrously armed and disgraced ronin out of 5.